Stakeholders ask: Can the United Methodist Children’s Home be saved?

Stakeholders ask: Can the United Methodist Children’s Home be saved? 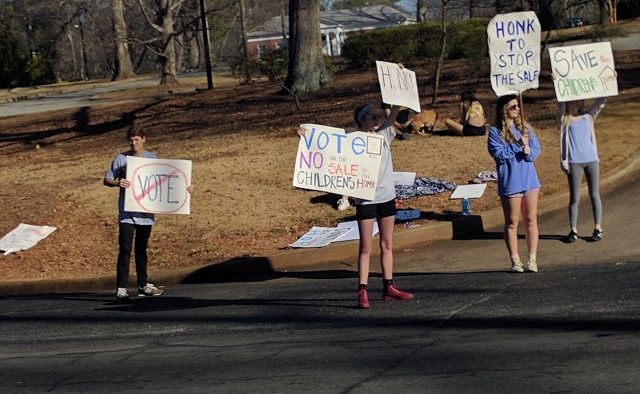 On an unusually warm Saturday morning in January, Mike Haynie stood in front of the United Methodist Children’s home on South Columbia Drive in Decatur.

He’s been here before, standing by himself holding signs warning about the potential sale of the orphanage he called home off and on between 1969 until he graduated high school in 1981. But on Saturday, he wasn’t standing along the road by himself.

A group of Decatur High School students who volunteer with children at the home stood along side him, waving signs and encouraging people to honk their horns.

“We volunteer here a lot,” one of them said. 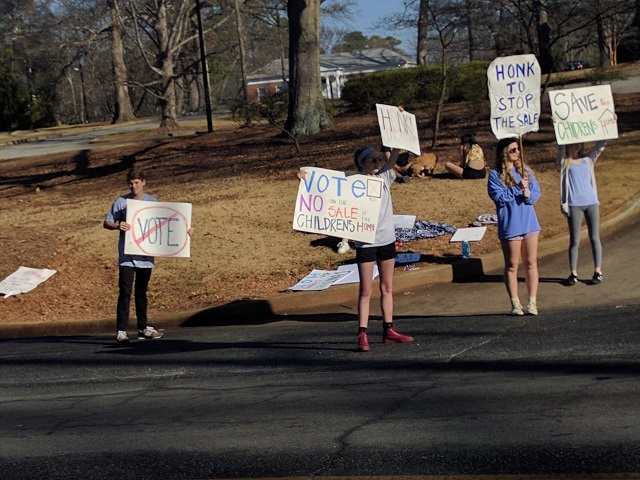 Development in and around Decatur has ratcheted up in recent years and the 77 acres at the campus would be a prize for any developer looking to build in Atlanta’s trendiest zip code. According to former UMCH residents who attended an input meeting, one potential plan for the property includes 600 homes on the site, though representatives of the home said the home isn’t even on the market.

But there’s a powerful force at work: the bonds between former residents like Haynie and the institution that shaped their lives when their biological parents could not.

“I’ve experienced some things a lot of people don’t know, not only me but other kids that grew up there,” Haynie said.

The Children’s Home has been in Decatur since 1873 and was established to care for children orphaned during the Civil War, according to its website. The city of Decatur has expressed an interest in buying it as a potential green space, but it’s not clear whether the city is in the mix as a potential purchaser.

For people living nearby, the prospect of housing development also means the threat of additional traffic and all of the headaches that go with it.

The UMCH alumni and neighbors came together on Friday, Jan. 13, at the Avondale Estates Fire Station. UMCH alums Debora Burger and Kathy Powell. The 30-seat room was filled to capacity.

“We have been swamped and overwhelmed this week,” Burger told the room.

At the meeting, Burger said that the Board of Trustees is weighing three options: selling all of the property, selling all but seven acres, or selling none of it. The property value is estimated to be somewhere north of $30 million. There were was also talk about possible grave sites on the property and the existence of a landfill that has since been buried.

John Cerniglia, Vice President of Development at The Children’s Home, said the UMCH board hasn’t hired a broker but said $30 million is one estimate.

“It’s important to remember that this analysis is about today’s children and families in crisis, and serving more of them. The 240 children and families we serve today are our number one priority,” he said. “And, the 13,000 children in state custody, many of whom are waiting for a loving, compassionate, and nurturing family to welcome them home.”

He said the grave of the home’s founder, Jesse Boring is on the site but the board doesn’t believe there are any other graves on campus. There is no landfill on the property, Cerniglia said.

At the Jan. 13 meeting, the group also discussed previous attempts to place the property on the National Historic Register and said the board had rejected this idea. Cerniglia said he was unaware of any recent efforts to do so.

“If this issue was ever considered by the Board, it was not considered in the last eight years,” he said.

DeKalb County Commissioner Larry Johnson attended the Jan. 13 meeting. He said if the property is sold to a developer who wants to put homes on the property, it would most likely need to be vetted as a Development of Regional Impact by the Atlanta Regional Commission. It’s an extra layer of scrutiny on top of the county zoning process that would measure the development’s impact on the surrounding community, including traffic.

The board is expected to vote on the matter before the end of the month, possibly this week according to one member. Burger told Decaturish that she is delivering a petition opposing the sale to the board today, Jan. 16.

Burger said there are ways the transaction could play out that would satisfy all parties involved.

“From the alumni perspective, a lot of people are grieving. They don’t want to see this happen,” she said. “Development happens for everybody. The reality is they could have a good development there which means they would sell some of the property and have a development the community  might be happy with. Do some historical recognition and everybody would go away happy.”