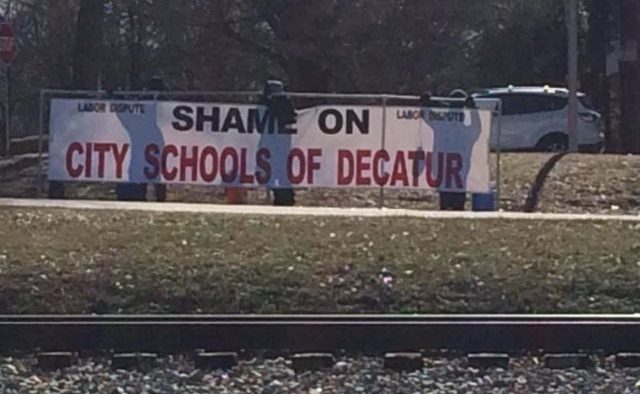 Members of the Southeastern Carpenters Regional Council stood in front of Renfroe Middle School on Jan. 26. Photo provided by a reader.
Share 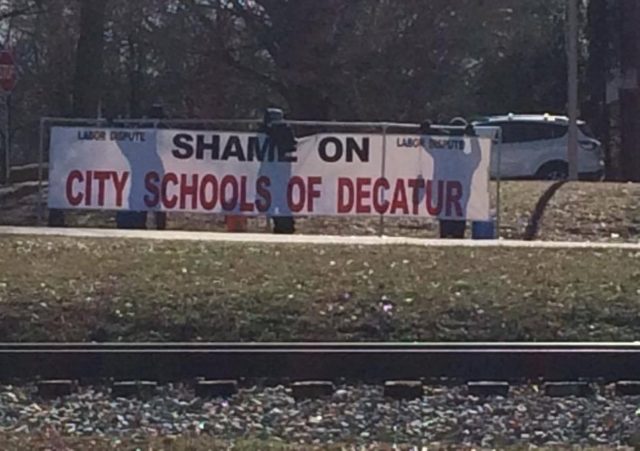 Members of the Southeastern Carpenters Regional Council stood in front of Renfroe Middle School on Jan. 26. Photo provided by a reader.

Members of the Southeastern Carpenters Regional Council, a labor union, stood in front of Renfroe Middle School today with a giant sign that said, “Shame on City Schools of Decatur.”

The Union’s actual target is the company City Schools of Decatur has hired to do construction work, Turner Construction, and its subcontractor NG Atlanta Construction Company. The protesters didn’t grant interviews but did pass out a flyer containing allegations that the companies considers employees working on CSD projects “independent contractors” in order to avoid paying taxes and deny them benefits. It also accuses the companies of taking advantage of immigrant workers.

The flyer has the wrong number for Turner Construction, however. It is actually the number for Turner Broadcasting. Decaturish left a message with Turner Construction seeking comment. Francisco Herrera, a manager for NG Atlanta, said he has seen the flyer and can provide proof to refute its claims. He said all his employees are vetted via E-Verfiy which decides whether someone can legally work in the United States.

“I don’t see how these people are protesting when they don’t know exactly what’s going on,” Herrera told Decaturish.

CSD said it has done nothing wrong. An email sent to parents by Renfroe Middle School’s principal says, “[The protesters’] concern is regarding hiring practices of a sub-contractor hired by Turner Construction Company. Turner Construction is the company hired by City Schools of Decatur to build the additions to RMS. City Schools of Decatur follows all fair labor standards and procurement practices. All contractors hired by CSD provide affidavits verifying adherence to the same practices during our selection process.

“Our students are safe, and these individuals are not impacting the normal operations of the school.”