Clarkston event a valentine from immigrants to America

Clarkston event a valentine from immigrants to America 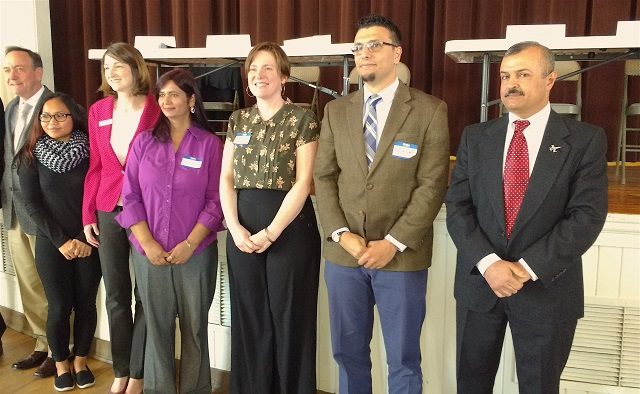 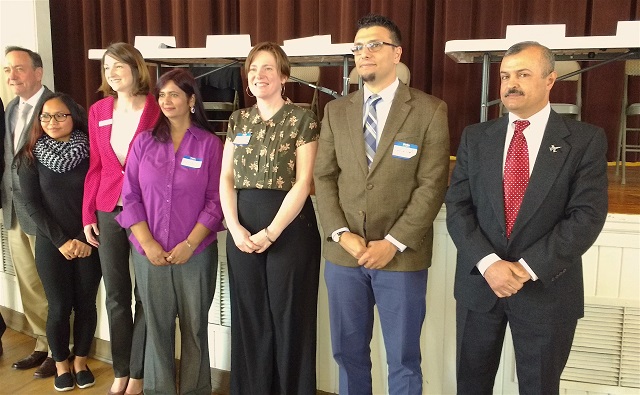 Clarkston is considered the most diverse square mile in the United States, also dubbed the “Ellis Island of the South.”

The city declared Feb. 14 “Clarkston Loves Refugees Day” and the Coalition of Refugee Service Agencies (CRSA) held a press conference in the city to discuss its 2016 report about immigrants and refugees in Georgia.

According to the report, 91 percent of Georgia refugee households are self-sufficient within the first 180 days of arriving in the United States—among the highest percentage in the country.

CRSA is a non-partisan group of 14 local refugee and immigrant service organizations. In the near future, CRSA will provide advocacy programs to help the public to understand a recent executive order signed by President Trump as well as related issues pertaining to the immigrant and refugee community.

Trump’s order blocks people from Iraq, Syria, Iran, Libya, Somalia, Sudan and Yemen from entering the U.S. for 90 days, and was initially interpreted to apply to green card holders. Federal judges have ruled against the order, and it’s not clear whether the president intends to fight those rulings or respond with a new executive order.

The event was hosted by Paedia Mixon, CEO of New American Pathways, a Refugee Resettlement Agency in Atlanta.

“What I tell policymakers as well as the public is that ‘Georgia is good for refugees, and refugees are good for Georgia,'” Mixon said.

The panel included Dr. Heval Kelli, a cardiology fellow at Emory University. A Syrian Kurd, his family fled Syria many years before the Civil War, and were the first Syrian refugees in Georgia, after living in Germany for several years.

Currently, Kelli assists immigrant and refugee communities and also helps U.S. veterans. Kelli said that nearly 25 percent of U.S. doctors are immigrants and every 1/10 are Muslim. He said these doctors are filling a much needed void; there are many areas in the U.S.—particularly in rural areas—bereft of qualified medical doctors and immigrants and refugees often serve these areas.

Kelli said he is working closely with recent Syrian refugees who have landed in Georgia.

Other refugees told their personal stories about making it in America.

Before coming to America as a refugee, Kareem Ahmed was a General and pilot in the Iraqi Air Force. When he came to the U.S., pilots were being laid off by large commercial airlines and he could not find a job flying planes.

Instead, he found a new career as the Regional Director for R. James Properties, which owns many apartment complexes in Clarkston and Metro Atlanta. In his position, he hires refugees, and the overwhelming majority of his tenants are from those same communities. “My best employees are refugees and immigrants, and so are my best tenants.”

Mixon asked him how he deals with the language barrier at his apartment complexes.

Ahmed said, “Many of my employees are multi-lingual. One employee speaks Arabic, French, German, Swahili, and English.”

He reminded the audience that, “Historically, there have always been refugees and even many prophets from the various faith traditions were refugees. Some may bring skills with them, while others may not, but they are human beings just the same. A refugee is someone who fled oppression, persecution, and injustice; they did not want to leave their homes, but do not feel safe remaining where they are.”

Beena Dahal, another panelist who hails from Bhutan, is currently the Parent Educator at New American Pathways.

She spent 17 years in a refugee camp in Thailand. Unable to become a citizen of either of those countries due to her ethnicity, she came to the U.S. in 2008 and became a citizen in 2014. She voted for the first time in the November elections.

“I love my country,” she said.

Dahal encouraged refugees and immigrants to “raise their voices, work hard, and prioritize education,” especially for their children. She also urged these communities to “get engaged with the wider community as much as possible.”

Meh Sod Paw, who was the final panelist, is from Burma/Myanmar. She is a Gates Millennium Scholar, a graduate of Clarkston High School, a Global Village Project participant, and current student of Agnes Scott College. Paw was born in a Thai refugee camp, where she lived for the first 11 years of her life. In 2007, she came to the U.S. unable to speak English. When she graduates college, she plans on helping her community and teaching in the United States.

He said there are upwards of 6,000 Somalis in Metro Atlanta. He said that he was at the event, “To support all refugees in Georgia; to remind people that refugees built America; and [to remind them] that refugees are part of the fabric of this country.”