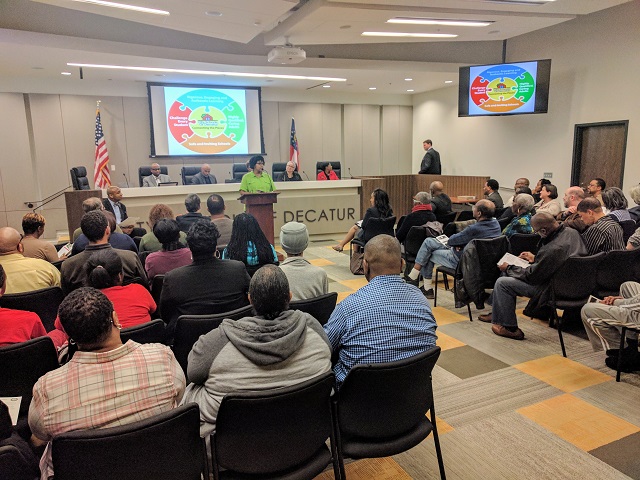 Decatur’s Beacon Hill Branch of the NAACP held a forum at City Schools of Decatur’s Central Office on Feb. 8. Photo by Dan Whisenhunt

“In 2015-16, a Black student in CSD was eight times more likely than a White student to be cited for rude/disorderly conduct,” the report says.

Dude told Decaturish his plan is to hire the equity director “ASAP,” possibly by the start of the next school year.

“Those of you who know me know I’m not naturally very patient,” Dude told the audience. “I don’t feel like we’ve made enough progress already. We will be moving forward quickly with that so that person’s sole role will be making sure things we implement are done with fidelity.”

“We welcome it,” he said. “Because what we know is, when we are concerned about an issue we direct resources toward that issue to try and address it.”

Other speakers offered insights and proposed solutions for parents and teachers of CSD students. At times the atmosphere was church-like with many people in the audience voicing their agreement with what the speakers had to say. Former school board chair and current Georgia School Boards Association Executive Director Valarie Wilson was one of the panelists and said differences in student achievement at CSD have been present for years.

“Seventeen years ago in CSD the student body in Decatur High was about 50-50: 50 percent African American, 50 percent white, pretty evenly put together,” Wilson said. “I was elected … and by the time I got sworn in, I had numerous parents coming to me saying there were two school systems in one in the City Schools of Decatur.”

Aminata Umoja, another panelist, spoke about creating “culturally relevant classrooms” and said the achievement gap – which she said is more accurately described as an opportunity gap – is nothing new and not unique to Decatur. It’s a problem throughout the United States. She said, “America is still racist, classist and sexist.”

“They’ve been talking about the achievement gap for over 40 years and nothing changes,” she said.