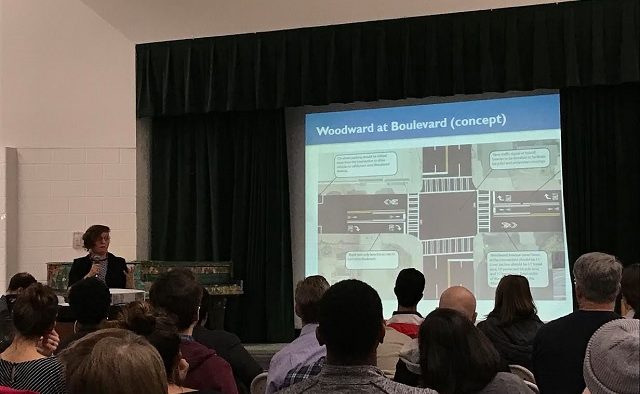 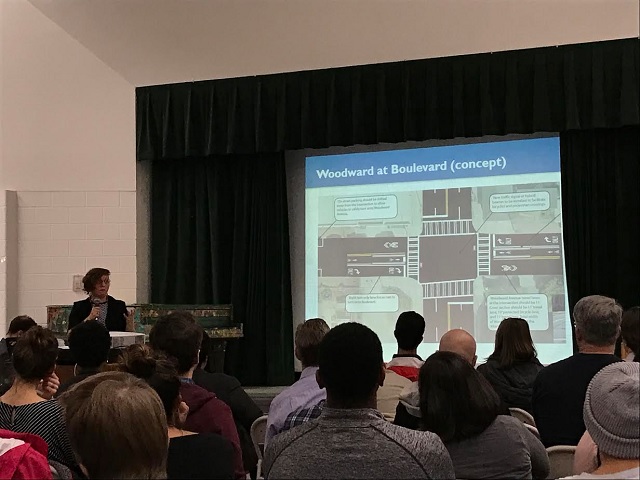 Over 100 people gathered in the cafeteria of Drew Charter School this past Tuesday night to attend an Imagine Memorial update meeting.

The project aims to overhaul and improve the corridor.

They audience hailed from neighborhoods bordering the 5.5–mile stretch of Memorial Drive that comprises the Imagine Memorial project, which stretches from downtown Atlanta to East Lake.

Sponsored by Councilmember Natalyn Archibong, whose council district encompasses much of the project area, the meeting featured a brief overview and updates on various projects along the Memorial Drive corridor.

“[Memorial Drive] isn’t a highway, it’s our front yard,” Councilmember Archibong said at the beginning of the meeting.

During the meeting, it was revealed that the Imagine Memorial project had recently received a $32,000 grant from the Atlanta Regional Commission (ARC), plus $8,000 match of local funds, to update, revise, and adopt the original plan started by Georgia Tech students in fall 2014.

This will allow the project to receive up to $500 million in grants to implement elements of the revised plan through ARC’s Livable Centers Initiative (LCI).

The LCI process enables citizens to take a more active role in the project’s planning and implementation.

“Anyone interested in becoming more involved can reach out to me, Councilmember Archibong, or his local neighborhood association,” said Greg Giuffrida, Memorial Corridor Executive.

He works to continue the Imagine Memorial project by coordinating citizens, public agencies, and development partners to achieve the mission of making the Memorial corridor “a safer, more efficient, and more inviting connection and destination for the communities of Southeast Atlanta.”

Shortly after Councilmember Archibong’s introduction and update about the LCI grant, Giuffrida began the part of the meeting devoted to project updates, which included short presentations by partners including the City of Atlanta, Atlanta BeltLine, and Georgia Department of Transportation (GDOT).

Andrew Heath, State Traffic Engineer at GDOT, explained that a full-length traffic study of Memorial Drive had been completed from Capitol Ave. in Downtown Atlanta to Candler Street.

“Over the past five years, we’ve seen well over 1000 crashes on Memorial Drive,” he said. “That’s almost one per day.”

The traffic study is currently under evaluation and will enable GDOT to explore the effects of different lane configurations and signal upgrades in the corridor.

Becky Katz, Chief Bicycle Officer at the City of Atlanta, focused on improvements to neighborhood streets to create neighborhood greenways.

The greenways would serve as bicycle and pedestrian-friendly thoroughfares offering east-west connectivity. One of these, the Trolley Line Trail, held its first public meeting in July 2016 and will be funded through the sales tax money secured the City of Atlanta in November. She also mentioned intersection improvements to will be implemented at Boulevard and Memorial, which will be funded by the Renew Atlanta bond.

Nathan Soldat from the Atlanta BeltLine Inc. offered updates on the progress of the Eastside Trail Extension. He said that the trail to Kirkwood Avenue in Reynoldstown would be complete by the end of summer 2017 and that funding has been secured to complete the extension to Memorial Drive, which will be completed approximately 18 months from the beginning of construction.

Soldat also confirmed that multiple transit corridor options for Beltline transit will be submitted to Federal agencies for environmental review in the second quarter of 2017.  One option includes a streetcar route directly on Memorial Drive while the other traverses Reynoldstown and crosses Memorial Drive at Bill Kennedy Way.

Giuffrida provided a virtual tour of the proposed and current development along the Memorial Drive corridor from west to east.

– Larkin on Memorial, a mixed use market and housing concept in the former location of Habitat for Humanity

– Atlanta Dairies, a 10.5-acre site that will contain a music venue, 300 apartment units, and office space

Residents voiced concerns at the close of the meeting, mostly related to safety for pedestrians along Memorial Drive.

“My son was hit by a car while walking to school,” explained Rebecca Serna, a resident of Kirkwood.  She went on to say that he is thankfully unhurt, but added, “How will you ensure slower speeds on Memorial and safer crossings?”

Other attendees asked affordability of the hundreds of new units being built along the corridor and how a diversity of housing stock will be maintained.

Giuffrida didn’t pretend to have all of the answers.

“With the Memorial Drive LCI, we will focus on affordable housing solutions in all neighborhoods along the Memorial corridor,” he stated.

At the close of the meeting, Giuffrida joked that the various entities, including City of Atlanta and GDOT, should all have one, large meeting.

“We will all be in touch,” he explained regarding further project updates, “but there are so many meetings, just so many things going on in Atlanta.”

Learn more about this project:

The Imagine Memorial website (http://memorialdriveatl.com) will be updated with additional information periodically. More information about the projects and organizations discussed during the meeting can be found here: