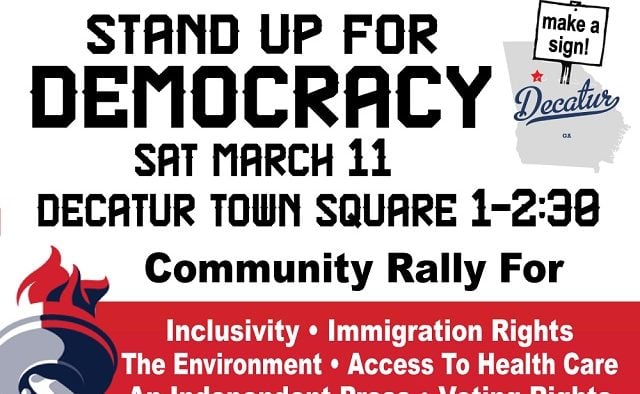 “We saw an upcoming assault of many progressive values that we saw as important,” George said. “We sent out an invitation to businesses to join this group, and now, we have over 75 people connected to the group.”

Since the group started, NAGS has met periodically to talk about current politics and sends out daily and weekly action alerts to members. After creating a solid group, they worked to generate more political involvement at the local level, deciding to organize a rally.

This Saturday, March 11, a family-friendly rally called Stand Up For Democracy will take place on the Decatur Square from 1 p.m. to 2:30 p.m. 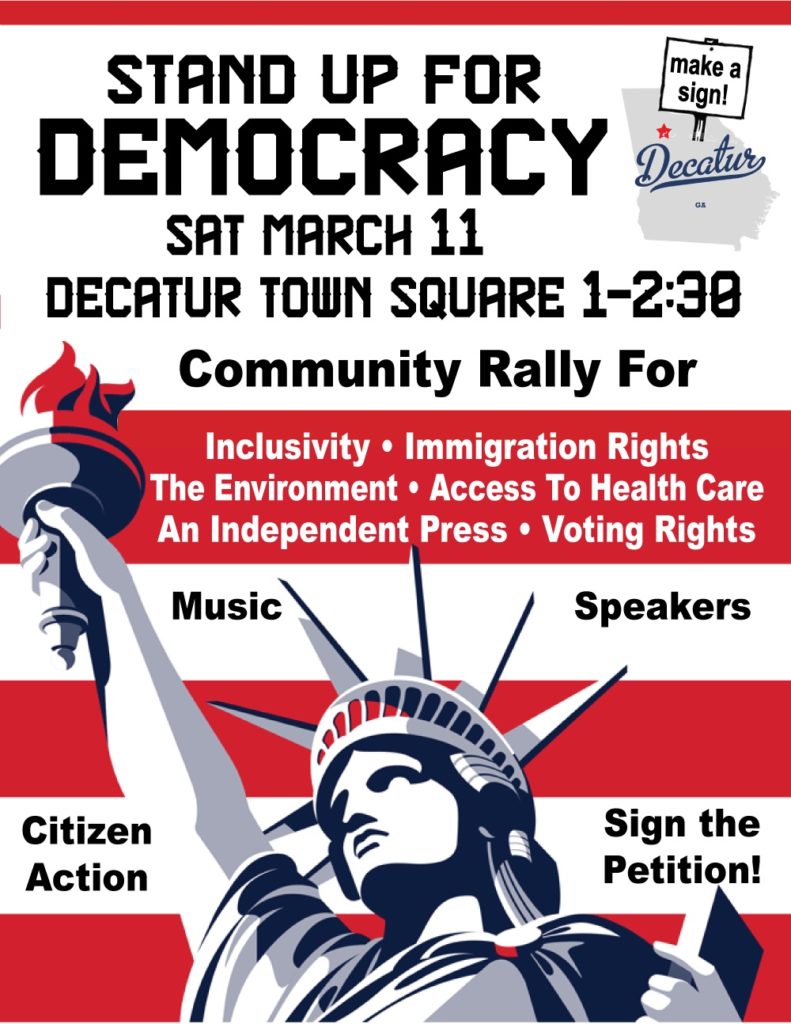 George said that the rally is “an opportunity to network and connect with other people that want to get involved with these common sense principles that we want to protect.” He said that can be as simple as, “showing up, signing up, and linking up.”

George thinks there’s great value in rallying with “basic values that are coming under attack.”

“Protection of the environment, inclusivity, welcoming immigrants, freedom of the press – these are core principles of America, and they’re directly threatened by the political conversation coming from Washington today,” George said. “I think it’s important for people who support, what we feel, are the best values in America to stand up and be heard.”

Stand Up For Democracy is nonpartisan, designed to be “informative and engaging.” George said that this rally’s guest speakers are familiar with issues, such as protection of voting rights, immigration reform, environment, and access to healthcare.

The list of people expected to speak at Saturday’s event include:

– George Chidi, former staff writer for the Atlanta Journal-Constitution, contributes to The Guardian and other publications and is part of the GeorgiaPOL team blog covering Georgia politics. George has been on the front line of free-speech issues in Georgia for many years.

– Asma Elhuni, Executive board of CAIR, The Council on American-Islamic Relations

In addition to guest speakers, the rally will include local live musicians and poets as “a celebration of values and people coming together” and to “represent the balance of life that we find important.”

With hopes of finding a balance, NAGS is petitioning for the city of Decatur to pass a resolution in support of progressive principles that locals will be rallying for on Saturday.

– Inclusivity and equality regardless of race, religion, sexual orientation, or disability.

– The reform of our immigration system where legal residency is attainable and immigrants are respected.

– The protection of voting rights and for access to that right to be strengthened by government.

– Every person’s right to access affordable quality healthcare regardless of income.

– A science and fact-based response to global warming, including increased commitments to alternative and renewable sources of energy.

– Recognition that protection of our environment must be a continuing priority.

– Community policing accountable to the community, where the rights of all citizens are respected.

Petitions have been circulating in the city of Decatur and Dekalb County to gain support for progressive causes, and George reported that there are “several hundred signatures on a petition already.”

“This is a movement. There are people meeting in living rooms and church basements and community centers all over America who are alarmed at the direction of our country. We’re part of something bigger,” George said. “Bring your children. It’s gonna be peaceful and joyful, it’s only an hour and a half, and hopefully people will leave [the event] and eat and drink and shop locally.”

For more information or to check out the petitions, visit www.mytownstandsup.com.