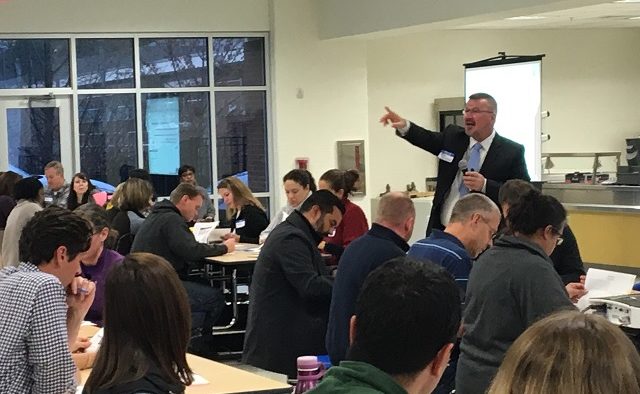 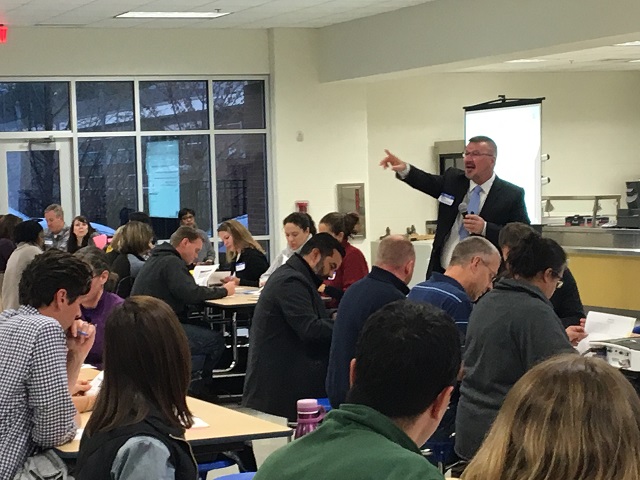 City Schools of Decatur held a public meeting yesterday at Decatur High School to go over three different proposed changes to the system’s elementary school configuration, proposed to be finalized next month.

CSD is adding a new school on South Columbia Drive, and there’s a looming question about how the different kindergarten through fifth grade (K-5) areas and classes will be affected around the district.

“We’re wanting your input,” Superintendent David Dude said during the introduction. “We don’t want any step we make to be made in a vacuum.”

Currently, all CSD elementary schools are K-3 that feed into a 4th and 5th grade academy. Some of the proposals on the table would change that arrangement.

The district hired Cooperative Strategies to work with the community on figuring out the implications of the changes for bus routes, teachers and geography. As of now, there are three plans the steering committee is looking at, and Tracy Richter of Cooperative Strategies presented them to the gathered parents at Decatur High.

“We want transparency,” Richter said. “We want you to see where we’re going with this, as we try to balance community concerns against logistics and school populations.”

The input meeting did not provide an opportunity for public questions. Participants gathered in small groups to discuss the questionnaire and record the results.

The first proposal is Option 1A, which proposes turning College Heights, Clairemont, Glennwood, Winnona Park and Westchester into K-2 schools. Fifth Avenue, Oakhurst, and the new school would become 3-5 grade schools, which gives an even student balance to the schools overall and smaller classroom settings with wiggle room, according to Cooperative Strategies.

But many Oakhurst residents were concerned about what the plan leaves out. The plan would put all three of the 3-5 schools on the south side of town. Many attendees pointed to this logistical issue as one of the biggest drawbacks to the proposed plan, along with removing third graders from leadership roles in the lower elementary schools.

“Moving all the 3-5 schools in the south will create a lot of traffic,” one Oakhurst parent and resident said. “Not to mention a lot of walkers will lose that ability and be moved to buses.”

Option 1B is similar, but changes the 3-5 schools to be Fifth Avenue, Glennwood, and the new school. Many attendees liked this idea better for the spatial layout of the schools across the district, but many also disliked the same change of making K-3 schools K-2.

One educator from a CSD school said that “it’s common for K-2 to be together and in education lines. They are closer as a group than 3-5.”

While the change would be a big shake up for CSD schools, the K-2 model isn’t uncommon around the country.

Option 2 is the one most in line with what CSD residents expected from the original school expansion proposal, many attendees said. The schools would stay K-3 and CSD would construct a new 4-5 Academy.  Richter said the biggest problem with this proposal is that it pushes all the K-3 schools to 103 percent capacity, leaving little wiggle room and the possibility of overcrowding.

“This is the idea I thought we were getting from the beginning, but now that I hear about the numbers per school, I’m less sure about it,” said one parent.  “I’m now a little torn between [option] 1B and 2, but I want more information.”

The school board is expected vote on one of these ideas by next month. A questionnaire given to the attendees to gauge their feelings on the proposal is also on CSD’s website. To take the survey, click here.