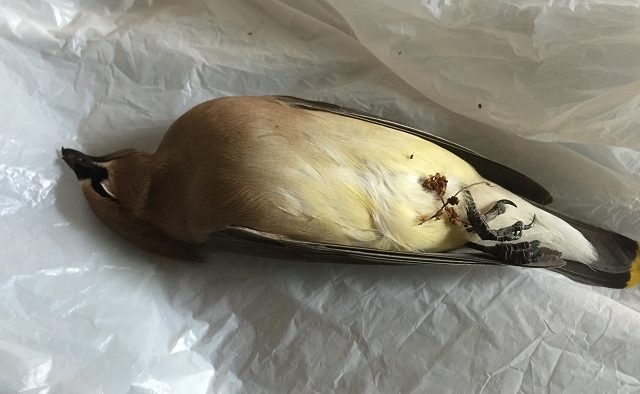 Last April, Decatur resident Charles Reid found a flock of dead cedar waxwings outside of Decatur High School’s front entrance. The flock was made up of 14 birds, and Reid found what was left of them run over in the road.

“Initially, when I stumbled upon them, it was pretty horrific and shocking. You don’t find this that often,” Reid said.

After finding the waxwings, Reid sent an email to a University of Georgia listserv that Steve Holzman manages, called Georgia Birders Online.

Shortly after receiving the email, Holzman reached out to Reid and asked for a frozen sample of the specimen for testing.

“I took it to the Southeastern Cooperative Wildlife Disease Study,” Holzman said, “They did what’s called necropsy on the bird, and they gave me a clinical report. They diagnosed the bird as dying from cyanide toxicosis.”

Back in 2009, a report connected several cedar waxwing deaths in Thomas County, Ga. to eating berries from a plant called Nandina, also commonly called heavenly bamboo, and the fate of the cedar waxwings in Decatur proved to be the same. (To see photos of this plant, click here.)

“[Nandina is] in probably one out of two yards in Decatur and Atlanta – it’s prolific,” Reid said.

For a while, Nandina was extremely popular because it’s easy to grow, but this shrub doesn’t pose a threat just for cedar waxwings.

Nonetheless, Reid points out that “this isn’t just an issue about Nandina.”

“It’s more of a story of not finding and planting invasive plants, but the nurseries won’t stop selling them because they make so much money,” Reid said.

While some states, like New York, have outlawed selling and planting invasive plants, other places still allow it.

Alongside managing Georgia Birders Online, Holzman serves as the president of the Georgia Ornithological Society, which works to conserve bird wildlife. After the flood of bird deaths last spring, Holzman set out to prevent more this year.

“I contacted Dr. David Dude, the Superintendent for the City Schools of Decatur. He talked to his Director of Facilities, Jason Ware,” Holzman said. “Before I knew it, Jason and his crew had removed all the Nandina bushes around the school preventing the deaths of many Cedar Waxwings.”

Still, he points out that removing Nandina bushes from DHS is “just one small little patch.” During this time of year, the early spring and late winter, “waxwings have exhausted most of their normal food supplies,” which is when they turn to eating Nandina berries.

“We don’t need to have this plant in our yards. We want common birds to stay common,” Holzman said. “One of the ways we can protect birds is minimize mortality through easy homeowner stuff.”

In efforts to help the cedar waxwings, Holzman provided some strategies to get rid of the Nandina in local yards: cut off the flowers when they bloom, remove berries and throw them away in the trash – not the ground – or cut the shrubs off at the base and put a herbicide called glyphosate on the stump.

“We can’t solve every environmental challenge,” Holzman said, “but this one is easy.”