The first 30 minutes of the meeting was an "open house," allowing residents to look over potential infrastructure layout options and speak one-on-one with government representatives, engineers and other personnel related to the DeKalb Avenue project. Photo by Duo-Wei Yang
Share 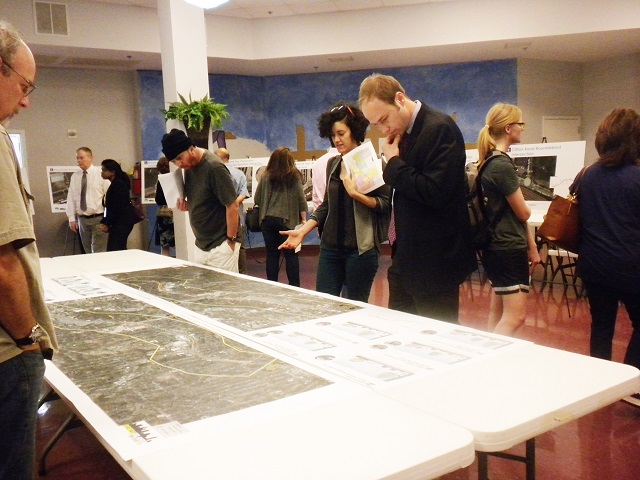 The first 30 minutes of the meeting was an “open house,” allowing residents to look over potential infrastructure layout options and speak one-on-one with government representatives, engineers and other personnel related to the DeKalb Avenue project. Photo by Duo-Wei Yang

Last night, the Renew Atlanta team presented road and infrastructure options for a proposed overhaul of the DeKalb Avenue corridor.

The $4.6 million “complete street” project would cover 4.4 miles of the road, and would involve milling and repaving the road, improving the sidewalks and making them more accessible to people who are disabled. Some ideas on the table include dedicated left turn lanes and getting rid of the  reversible middle lane so the left turn lanes can be longer. There’s been a suggestion that better lighting and bike lanes are needed along the road.

For a full fact sheet on the project, click here.

Renew Atlanta made its presentation at Liberty Baptist Church.

Attendee Rise Pacaha was “excited to see some of the improvements” and has high expectations of this long-term project.

“I want to see the beautification. I love the new trees. The tulip trees are beautiful, so I think we’ll see more of that,” she said. “I worry about crime in our area. We’ve had several break-ins and stuff, so I think that improved street conditions might help that out.” Attendees of the meeting were polled on their top choice among types of cross sections, road layouts, methods to calm traffic, and more. Some people wanted to vote none of the above, but it wasn’t an option. Photo by Duo-Wei Yang

Jim Voris hoped for roads that would be friendlier to cyclists and pedestrians, and be a general “street we would feel safe walking in.”

“We love the Beltline and that has kind of whet our appetite for more safe places to walk in the city,” he said. “For the first time since I’ve lived here, there’s some big investments being made in transportation and infrastructure, so we want to make sure that those investments capture our vision for the city.”

“It’s not a one-size fits all approach. It’s customized to the land use, to what the future is going to look like in a particular area and to the needs of all of the users,” she said. “This is something that will create a system throughout the city.”

DiMassimo emphasized to attendees that the options the team is currently proposing are not final, which was a popular rumor.

“That is absolute and completely fictitious. We are not going to waste your time with meetings like tonight if that were true,” she said. “Your input is extremely important and extremely valued.”

The focus then turned to Project Manager Derek Westfall, who began explaining the biggest topics residents had concerns about from the last input meeting. The top concerns were bike lanes, dealing with turns and signals and pedestrians.

Westfall believes that a majority of the comments addressed ways to promote safety on the road.

“You can see that there’s a theme building here,” he said.

The meeting then largely continued with a series of polls on what some stretches or roads or intersections could look like. Some residents voiced their concerns that their opinions weren’t represented by the examples the Renew Atlanta team designed.

Westfall immediately tried to alleviate people’s worries, saying that “this is only a general thing.”

“After tonight, our plan is to come back in early summer and present to you what we’ve heard and more details on conceptual design,” she said. “We’re still developing and testing. We plan to finalize the concept in the second quarter of 2017.”

Several residents had concerns on how Renew Atlanta was conducting traffic studies and using them to form infrastructure plans.

Whenever studies are done on DeKalb Avenue, intersecting streets are also taken into account, Rice-Singleton said.

“We’re in the process of analyzing what is the traffic count along the corridor,” she said.

Westfall also said that neighborhoods would also be considered in future analyses, but nothing was concrete yet.

Although DiMassimo noted that there’s still plenty of debate on what the community wants to see, she feels optimistic about the next stages of the project.

“I think the thing that is encouraging to me is that we continue to have as much public engagement as possible as we do, and it’s spirited and people are passionate about the community,” she said. “Those are all good things and can only lead to a good outcome.”