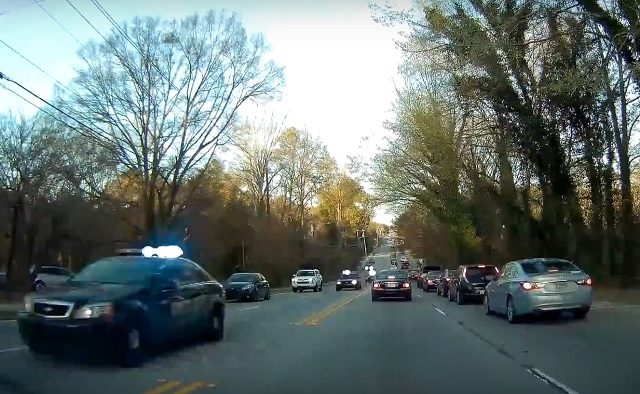 DeKalb Police have released more details about what caused a high-speed police pursuit on Scott Boulevard in north Decatur on Thursday evening.

Police said they also found a mistreated five-year-old boy in the suspect’s vehicle. Numerous readers contacted Decaturish about the incident, which caused at least two accidents and was responsible for multiple near-misses. Several police cruisers were involved in the chase.

A reader captured this dashcam video of the chase along Scott Boulevard:

“The pursuit resulted from a reported armed robbery at the Family Dollar at 3855 Lawrenceville Highway,” Maj. Stephen Fore said. “… The vehicle [a white Honda Accord] was spotted by uniform officers and a traffic stop was attempted. The suspects refused to stop and fled.”

Fore said the chase caused two accidents. No injuries were reported. Fore said the suspect sideswiped a vehicle going through an intersection and there was a second accident at the end of the chase where the officers had placed spike strips to stop the car. The suspect swerved to avoid the spikes and hit another vehicle before hitting a fire hydrant at Patel Plaza. Decatur Police reported responding to an accident on Clairemont Avenue at Michigan Avenue that occurred as a result of the pursuit, but it was not clear if that was one of the two accidents Fore referenced.

“[The suspects] attempted to flee on foot and were taken into custody by officers,” Fore said. “There were no injuries reported. After the incident it was discovered a child about five-years-old was in the vehicle. The child was deprived and turned over to [Department of Family and Children Services]. An adult male and female were taken into custody.”

Police found a gun and the two suspects are facing charges related to the robbery of the Family Dollar, in addition to a charge of a convicted felon in possession of a firearm, child endangerment, possession of a firearm during the commission of a crime, fleeing and attempting to elude police, “plus a host of traffic charges,” Fore said.

“The female also had an outstanding warrant for dangerous drugs,” Fore added. Police have withheld the names of the suspects because they are waiting to see if they are connected to other crimes in the area.

Some Decaturish readers questioned the need for the pursuit on a notoriously busy and dangerous road during a busy time of day. Fore said officers made the right decision.

“The pursuit was initiated on the report of a forcible felony, where grave bodily injury or death was threatened to carry out the crime,” Fore said. “Allowing a violent criminal passage back into the community puts everyone at risk with the likelihood their criminal acts would continue.”

The chase is in line with the police department’s chase policy, which only allows officers to chase suspects accused of a serious crime like armed robbery.