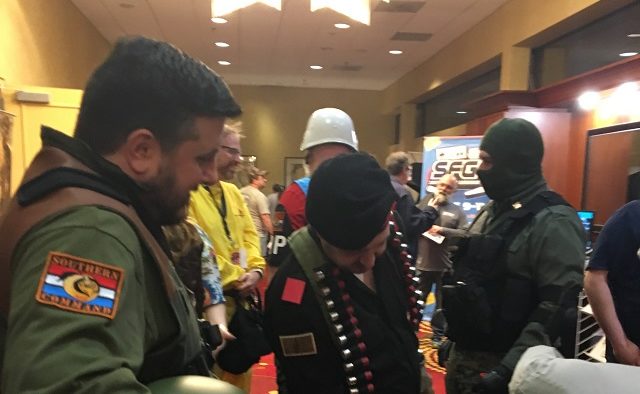 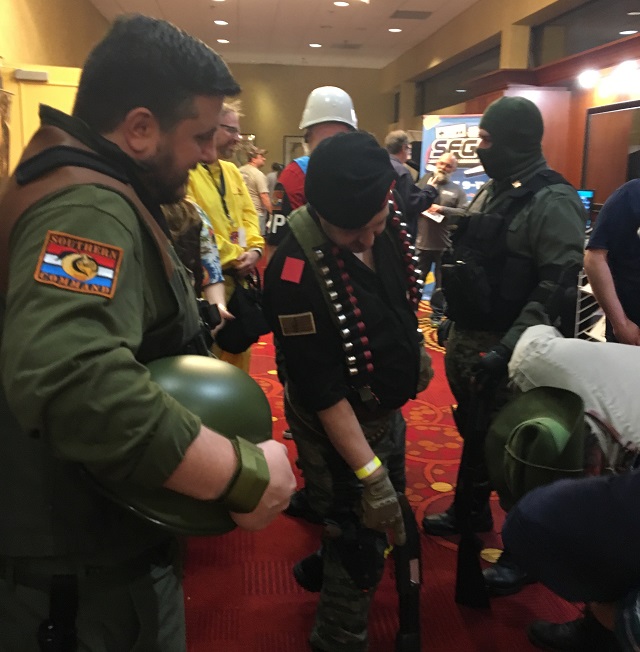 Several “costume players” or cosplayers, gather outside a convention hall in the Century Marriott to trade tips on costume design and wear at the annual “Joelanta” convention March 12. Photo by Gabriel Owens.

Fans of the long-running toy line and cartoon series “GI Joe” and other pop culture icons dressed up and invaded the Marriott Century Center over the weekend for the Great Atlanta Toy Convention, also known as Joelanta.

Running all weekend, this convention was originally created to celebrate the Hasbro toy property GI Joe, dating back to the 1960s with the original first 12 inch “action figure”  through the 1980s’ smaller 3 3/4 inch figures and their enemy “Cobra” (along with the famous accompanying daily cartoon), through today’s incarnations and movies.

“We have been running this convention in Atlanta for 17 years,” said Marten Jallad, director of the convention. “We have been expanding it do beyond just GI Joe, and looking for a place for fans of all different areas of pop culture to come and have fun together.”

The convention featured toy dealers, displays, and panels about various topics relating to GI Joe and other TV shows, movies and toy lines, mostly from the 70s, 80s, and 90s. This included a smaller “Botlanta,” dedicated to another Hasbro toy property, Transformers, which had various panels and displays throughout the weekend inside the Marriott.

“We wanted to test run a smaller Transformer-themed addition to the con,” said Rob Springer, manager of Botlanta events. “With the lessons learned here, we will look to expand next year to a larger ‘Mincon’ event with more guests, panels, and possibly a separate dealer room.”

“With so many big ‘corporate’ conventions running around the country, like [The San Diego Comic Convention] and DragonCon, I think many of the fans like having a smaller, more intimate setting to meet, show off costumes, and basically have a good time without being overwhelmed,” Springer said.

Some of the events included:

“When I was growing up, there was nothing like this [that I was aware of],” said Tom Camberton, a 46-year-old Atlanta resident and super fan of comic books and cartoons. “This is such a fun event for us old fans, and the new. I love bringing my kids and watching them have a good time with the toy booths and displays, and meeting [other kids around their age]  that share their interests.”

Jallad said that the convention will continue next year and they look forward to moving their brand from “Joelanta” to the more inclusive “Toylanta.”