Artists come back to Decatur to finish painting MARTA mural

Artists come back to Decatur to finish painting MARTA mural 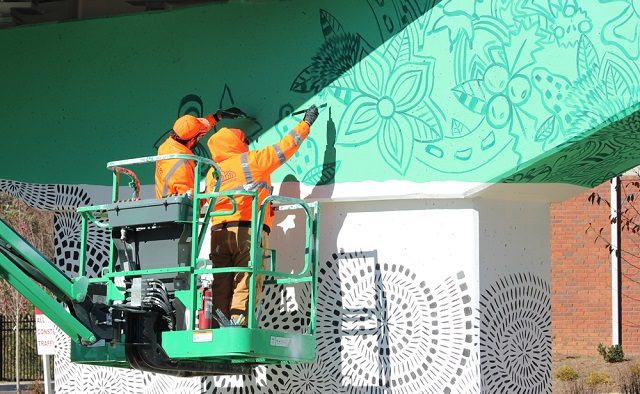 Photo of the artists at work, obtained via the City of Decatur.
Share 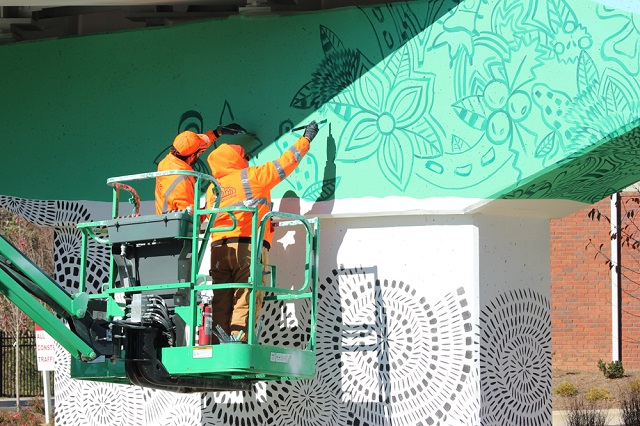 Photo of the artists at work, obtained via the City of Decatur.

The artists painting a mural on the MARTA overpass at West Trinity Place have returned to work after putting down their paint brushes December.

The city hired Milagros Collective, from Miami and New Orleans, to head up the mural project.

Two of the artists working on the project were in a residency program at the Massachusetts Museum of Contemporary Art during January. The team decided to wait until this month to resume its work because the paint will adhere to the surface better in the warmer weather.

The artists started painting again on April 1 and will paint each day until April 9, from 9 a.m. until 9 p.m., the city says.

More from the city of Decatur:

West Trinity Avenue will be closed to through traffic near the overpass so that they will have safe access in order to paint the rest of the mural.

Thank you for your patience as we beautify this area and save the date of Sunday, April 23 for the dedication and celebration of the community mural and new playspace.  Celebration details to follow once they are confirmed.  In the meantime, feel free to walk by the location and watch the progress.

The mural will cost $30,000, and will be partially funded with a $15,000 grant. The area under the bridge will become a playspace funded by a Kaboom! Play Everywhere grant.

“The space will be an extension of the mural and have features such as hopscotch, four-square, an artist-created bench and more,” a press release from the city says. “The space is also used as a bus stop by the adjacent community and once the mural is complete and the space is activated, it will be brighter, more welcoming, and add an element of fun to the area.”

The project has had some setbacks. The discovery of lead paint and the subsequent abatement held the project up for several weeks. Work officially began in the middle of November.