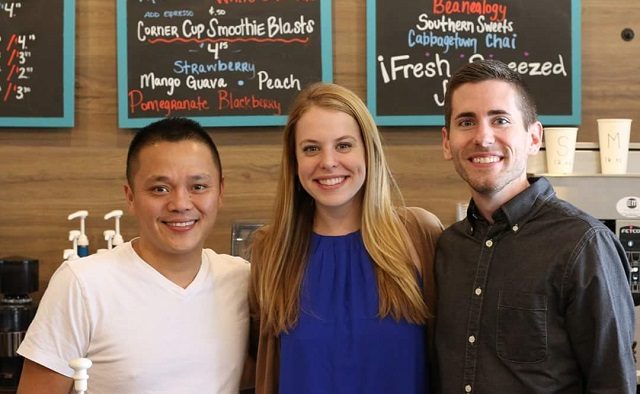 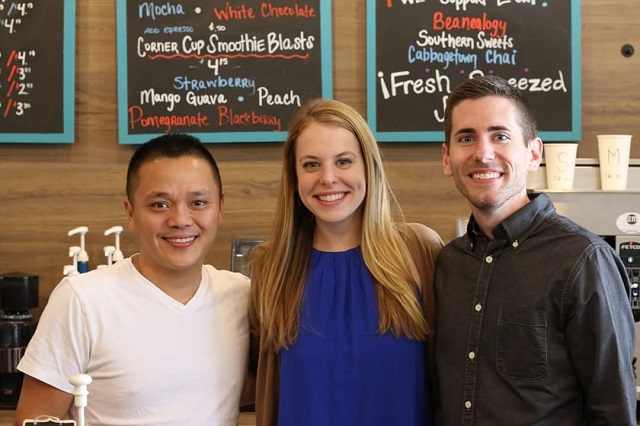 There’s a friendliness and familiarity about Corner Cup, a coffee shop located off of Lawrenceville Highway and McLendon Drive in greater Decatur.

If customers didn’t know better, they’d think the place was a long-standing neighborhood institution. But the store recently celebrated its one year anniversary.

Kimberly Jordan is a new customer. When she walked through the door, she noted that everyone seemed to know each other, like a more caffeinated version of “Cheers.”

She soon became another regular.

“I like that it’s not a Starbucks, but it’s close,” she said. “It’s one of the few things in the area that’s not a chain.”

While Starbucks shops continue to spread across the Atlanta landscape like a weed, Corner Cup has staked out territory as the bright spot in the corner of a woebegone shopping center. It’s located across from Pea Ridge restaurant, where the owners of Corner Cup used to work. The shop is owned by Patrick Hinh, Tess Cook and Rich Lavery.

Since Corner Cup opened a year ago, it’s attracted a group of regular customers who visit several times a week. Hinh estimates about 75 percent of the customers live nearby.

The restaurant sources its coffee from Beanealogy, a local company.

“The reason we went with them is [the owner’s] mother in law owns the estate in Nicaragua where they get the beans,” Lavery said. “We know where the beans come from, and we know [their workers are] paid better than fair-wage value. We like to have this guy as our bean roaster, because the money goes back to the family, and they provide awesome classes for the kids, and they give back to the community.”

Corner Cup carries baked goods from local companies as well, including Duck’s Kitchen in Decatur and Emerald City Bagels in Atlanta. Hinh said the two popular drinks are the Matchai Picchu, a dirty chai and matcha green tea, and the Bee Naughty, a vanilla latte with honey.

“We get to know the customer,” he said. “We talk about stuff. On top of that, our coffee is pretty good.”