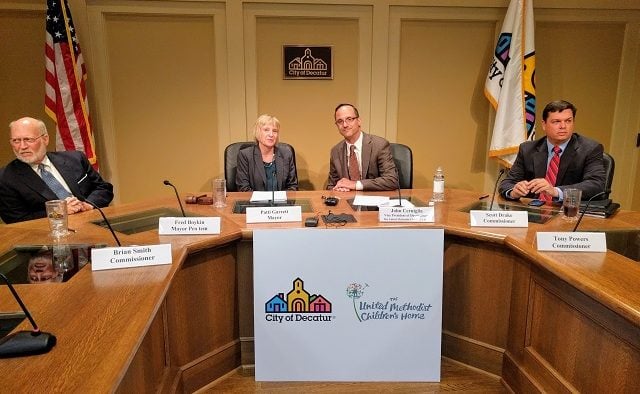 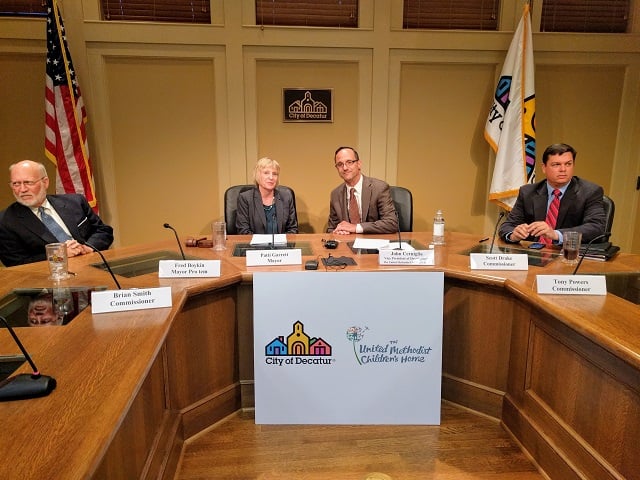 The Decatur City Commission has unanimously approved an agreement to purchase the 77-acre campus of the United Methodist Children’s Home.

The audience applauded after the commission voted to approve the agreement at its April 17 meeting. The purchase price is $40 million. The city will make the purchase through its recently created Public Facilities Authority. The city of Decatur intends to use the property as a public space.

“It is a unique and historic opportunity that we have been presented with,” Mayor Patti Garrett said.

If the city pays for the property by borrowing money, it will mean a tax increase of 1.4 mills to pay off the debt. That would mean an additional $350 in taxes on a home valued at $500,000.

– The UMCH will retain ownership of the Moore Chapel to provide a space for contemplation, weddings, reunions, and gatherings. If the UMCH or an associated organization no longer desires to own the Chapel parcel, the City can purchase the Chapel for a nominal cost.

– Jesse Boring was an important trailblazer in the history of the United Methodist Church, the UMCH and the State of Georgia.  The City of Decatur will respectfully protect Mr. Boring’s gravesite near the existing administrative building, which would be named in recognition of the contributions of Bev Cochran who previously served as the Executive Director of the UMCH for 43 years.

– The City has 100 days to secure financing and then 15 days to close the transaction.  The UMCH would have up to 60 days after closing to vacate the property.

The Children’s Home has been in Decatur since 1873 and was established to care for children orphaned during the Civil War.

The city has had its eye on the property for years, but began conversations with UMCH in earnest back in January. It was never formally placed on the market. The property purchase will add green space, athletic facilities and office space to the city. Once the sale has closed, the city will annex the property, which will take six to eight weeks. UMCH will vacate the property by late summer or early fall.

UMCH is not closing, but is changing how it offers services. People currently living at the home “will enjoy continuous and uninterrupted services,” the organization said in a press release.

“Current residents will relocate to safe and appropriate housing primarily in DeKalb and Fulton counties and they will be actively involved in helping plan this process,” the press release says.

The property is going to add an enormous amenity to the city, and a big planning challenge, too.

After the commission voted to approve the purchase, City Manager Peggy Merriss said, “I keep telling everyone, ‘Now we’re the dog that caught the bus.'”

Once UMCH has vacated the campus and Decatur has taken over the property, it will begin a “community-based master planning effort engaging nearby neighborhoods, UMCH alumni and other community stakeholders” to determine how to use the property.

The city made sure to note that the purchase price works out to be $520,000 an acre. Property within the city limits goes for $1 million an acre for residential and $1.5 million an acres for commercial.

John Cerniglia, Vice President of Development at The United Methodist Children’s Home, said $40 million was a generous offer. If the property remained in unincorporated DeKalb, it would be worth about $34.5 million to a potential buyer, he said.

“We think $40 million is a good price based on the data and analysis we conducted last year,” he said.

The sale stirred up emotions for alumni of the Children’s Home who attended the commission meeting. They agreed the city’s purchase of the campus, which preserves the history there, was preferable to selling it to a developer to build homes on the property.

“It’s bittersweet,” Mike Haynie said. “We’re happy that the city of Decatur decided to purchase, but we’re still sad that the land got sold.”

Like Haynie, Kathy Powell lived at the home and she still considers it home.

“It’s going to be a little different now,” she said. “It’s something you have to process for a long time. I wish the city the best. I hope the alumni will have a chance to actually participate as they have said that they would want us to do.”