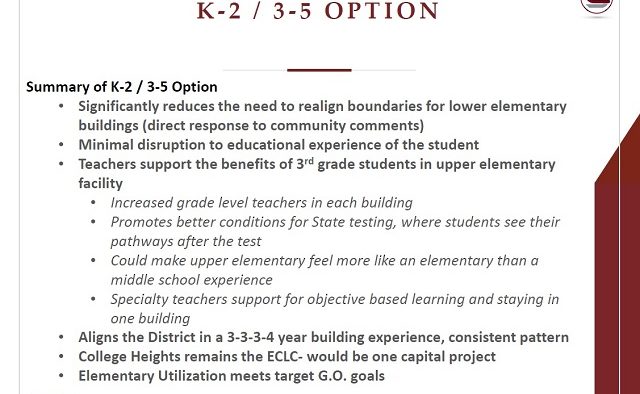 When the Decatur School Board meets on April 11 it will discuss the latest proposal to reconfigure the city’s elementary schools.

Earlier options had proposals suggested making Oakhurst Elementary or Glennwood Elementary into a grade 3-5 school that would be fed by the other K-2 schools. But this new option turns all of City Schools of Decatur’s current K-3 schools into K-2 schools, makes the 4th and 5th grade academy a 3-5 school and recommends the new elementary school become CSD’s second 3-5 school.

Another notable aspect of this plan would be retaining College Heights as an early childhood learning center.

A second option up for consideration would keep the current K-3 configuration while building a new 4-5 Academy.

The note attached to the School Board agenda said the CSD steering committee studying this issue prefers the first option that would make all elementary schools K-2.

One of the stated advantages of that plan is it, “Significantly reduces the need to realign boundaries for lower elementary buildings.”

Translation: it will mean a less painful rezoning process down the road.

It is expected that the School Board will make its final decision about how to reconfigure the city’s elementary schools at its May 9 meeting.

“The [steering] committee will present these options at the April 11 [school] board meeting, along with a draft survey to gather additional feedback from the community on these two options,” the note attached to the meeting agenda says. “Following input from the Board, the survey will be shared with the community for approximately two weeks.”

The April 11 meeting begins 6:30 p.m. and will be held at CSD’s central office, located at 125 Electric Avenue, Decatur, GA.

Here is the presentation about the new option that was attached to the April 11 School Board agenda: