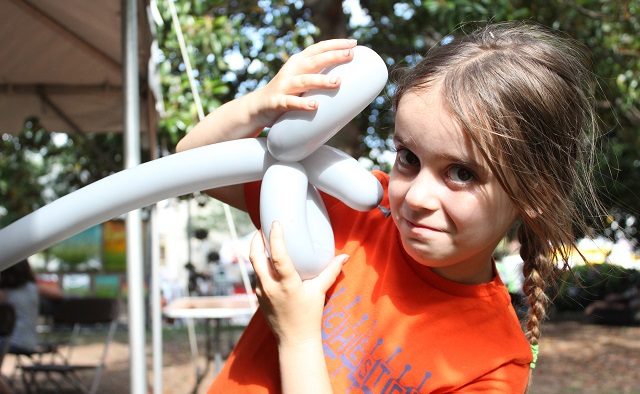 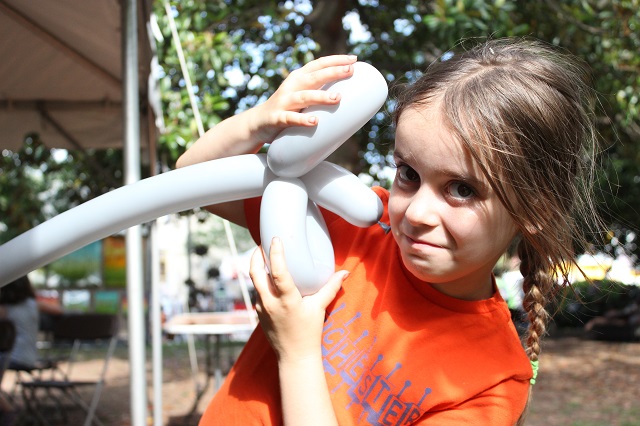 The closing act for the Decatur Arts Festival’s Saturday afternoon comedy tent was not a professional comedian, but an 8-year-old girl with lots of jokes up her short sleeves.

After winning the festival’s Open Mic competition last year, preteen Thelma Wyttenbach was given the final slot for the Decatur LOL tent at the festival on May 27. Before entering the competition, Wyttenbach had no experience doing comedy, but she was a natural.

“I just kind of signed up for the competition last year, and I did a lot of really good jokes. They liked me a lot, so I won,” she said. “I didn’t even tell my mom I was signed up for it. And now I get to come [to this year’s festival] and perform again.”

Though she had no experience with comedy, Wyttenbach’s been on stage before. As a child, she performed original songs at restaurants like Big Tex and Burnt Fork Barbecue with her music teacher.

She also makes balloon art, twisting and selling balloon animals at Woodlands Garden’s M.A.Y. Fair. During her comedy show Saturday, she incorporated her love of balloon animals into her routine. For the first bit, she put a balloon pump up to the mic and giggled in between each pump, immediately drawing laughs from the audience.

“Oh, I’m not even done yet,” she laughed as they applauded.

The rising third grader at Westchester Elementary continued to tell stand-up jokes while pumping balloons and calling on audience volunteers – including some of her best friends – to take part. Most jokes related to animals, especially squirrels and dogs, which she would simultaneously recreate with a balloon.

Wyttenbach’s material for her jokes comes from a love of animals and nature.

“I make mostly jokes about animals because those are my favorite,” she said. “I make balloons out of them, like a squirrel, and then make a joke about the squirrel.”

At one point, Wyttenbach’s humor doubled as a magic trick, too. Making a balloon version of a “crazy dog,” she pretended like the dog bit her, with a red stain appearing on her hand.

“Look! Even real dogs seem to like that one,” she said as a dog passing by barked.

Wyttenbach’s age doesn’t stop her from doing what she enjoys, she said. Although she’s young, she likes getting out to perform, be silly and make other people smile.

“I’m going into third grade but I can already make people laugh,” she said with a smile. “And they’re all older than me too! Well, them and my friends.”

Throughout the performance, Wyttenbach had the support of not only the audience, but her friends and family as well.

“All my friends like to come and watch because they think it’s really funny,” she said. “It makes me laugh and feel happy to see them.”

With all the seats filled, Wyttenbach had one of the biggest audiences of the day. Still, the crowd didn’t petrify her. She kept everyone, adults and children alike, laughing the whole time.

The Decatur Arts Festival will run through May 28. The Decatur LOL tent, hosted by Lew Lefton, can be found in front of the courthouse on Ponce de Leon Ave. There is no cost to attend.