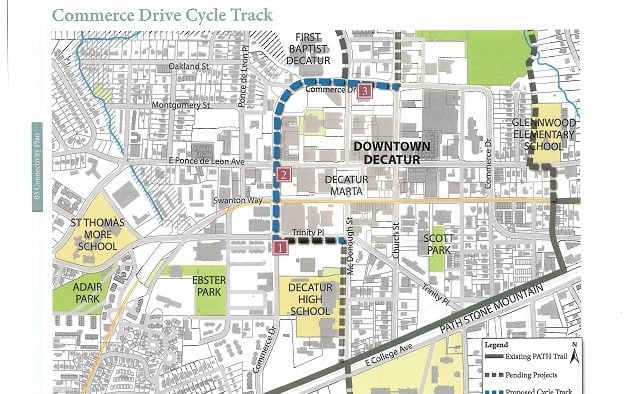 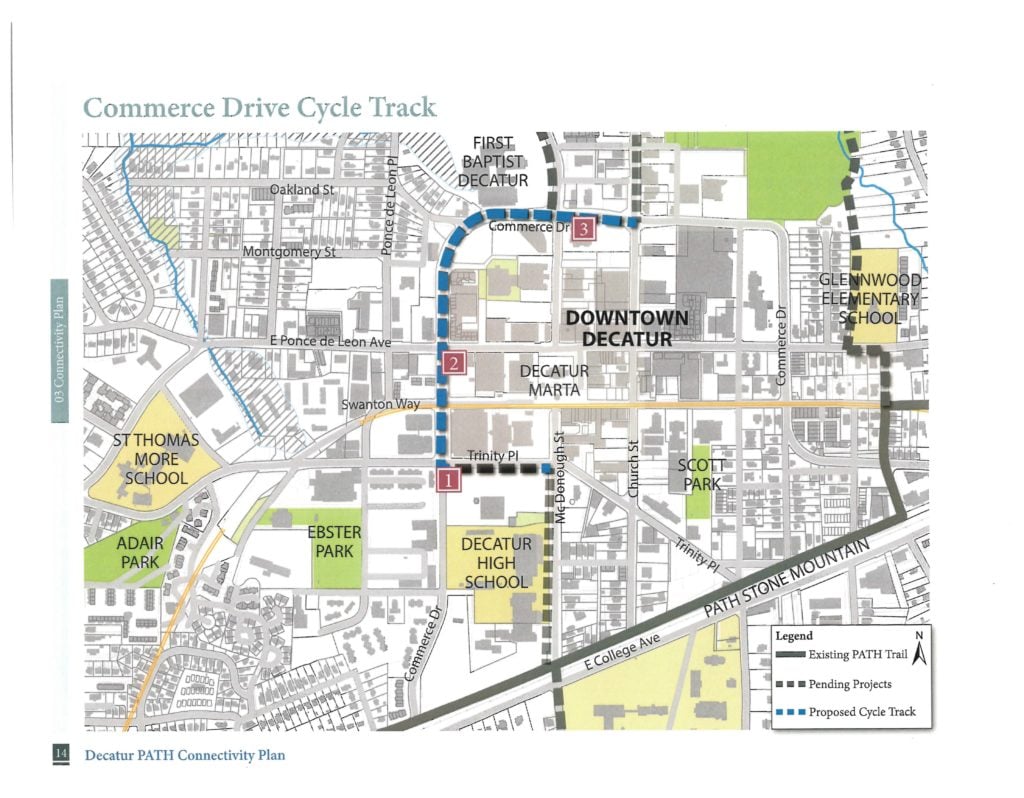 A proposed cycle track on Commerce Drive that would narrow the busy Decatur road is still moving forward.

City commissioners listened to more than an hour of public comments for and against the cycle track at their May 1 meeting. The commission decided back on March 20 to approve the agreement with the PATH Foundation for construction of the track. No one spoke out against it prior to the vote.

Mayor Patti Garrett said even though opposition has organized against it, it’s unlikely the commission will reconsider its earlier vote in support of the project.

“With respect to re-consideration of the cycle track, I did not receive any indication from the other commissioners last night that they would like to revisit the vote,” Garrett said. “I think there are some important takeaways from the public comments last night: traffic signal timing, maintaining a left turn lane and monitoring impacts on neighborhood cut throughs will be important.”

Many people who spoke in opposition to the plan say it caught them by surprise.

“I found out about this plan four days ago,” a speaker said. “I think it’s really important you revisit this.”

The cyclists supporting the track, who showed up in force as well, said the city should move forward.

“The petitioners, I admire the way they put it together,” Tonio Andrade, a cycling advocate, said of the people who spoke against the track. “I understand the concerns. That said, we all know how important protected bike lanes are, how safe they are. The city of Decatur has had a proven track record of making good decisions.”

City Manager Peggy Merriss said the design for the project is underway, but she said the contracts have not been signed. Merriss indicated during the meeting that they had been.

“I misinformed Mayor Garrett when I told her the contracts had been signed,” she said. “What I should have said was that the project had been approved and authorized and that design was underway. It is substantially similar but not exactly the same thing and it was my error.”

The Commerce Drive cycle track will start around Trinity Place and end at Clairemont Avenue. Deputy City Manager Hugh Saxon said construction will start this fall and the track should be completed in eight to nine months, around the middle of 2018.

The proposal, which would reduce a portion of Commerce Drive from two lanes to one north and southbound lane and a center turn lane to accommodate the cycle track, recently caught the attention of people in the community who worry about what the plan will mean for local traffic. A petition against it generated about 400 signatures, the petition organizer Ria Sweeney said.

“These bike lanes were planned to be implemented in 2015 and would’ve gone in at that time,” Garrett said. “We were approached by folks who said we need to make them comfortable enough for people to ride on who aren’t bike riders.”

Sweeney, who organized the petition, said she is concerned the cars that no longer drive on Commerce as a result of narrowing the road will drive on residential streets to get around it.

“The community really didn’t know about this in details,” she said. “I’m telling you people are shocked by this.”

Some of those opposed were themselves cyclists who thought Commerce Drive was a bad spot for a cycle track. As one put it, “Never have I needed to or desired to ride my bike on Commerce because there are so many other nice places to ride.”

The cyclists in support of the cycle track said they want Commerce Drive to be a nice place to ride a bike, too. One father noted that it would make it easier for his children to reach the south side of the city.

After the meeting concluded, most of the audience left, but commissioners reflected on some of the things they heard during public comments. Commissioner Brian Smith counted 23 people speaking in support of the cycle track and 13 speaking against. He said the debate is a good reminder for people to pay attention to local government.

“Voice your opinion, as so many of you did tonight,” Smith said. “You gave us a lot of things to think about. Those opinions are valid tonight, but they are valid throughout the entire process. I want to encourage you to continue to do that, ideally before we have the vote.”

Commissioner Tony Powers said, “This type of stuff keeps us awake at night. We value your concerns, not only because your concerns are valid. It’s our lives, too.”

“I share your concerns on both sides of the issue,” Powers added. “Stay tuned. There’s more conversation to be had at some point.”

Commissioner Fred Boykin, who in 2015 retired as owner of Bicycle South, said he has been a “strong supporter” of the cycle track and conceded, “Change is difficult.”

“I do understand when you change commuting patterns, you change congestion issues,” Boykin said. “It does have an impact on people … In this case, I support the effort and so what I’ve heard tonight won’t change my vote.”

Editor’s note: Portions of this story were compiled by watching the live video stream of the Decatur City Commission meeting.