Decatur School Board considering plan that will reconfigure elementary schools

Decatur School Board considering plan that will reconfigure elementary schools 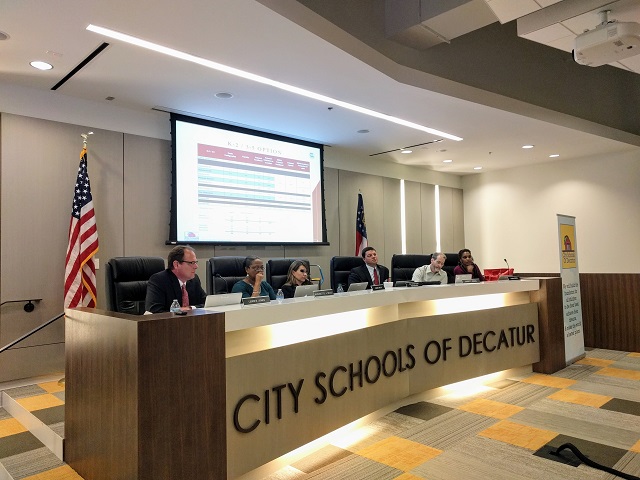 Decatur’s School Board will meet on May 9 and could vote on a plan that will affect every elementary school in the city.

Currently, the board is weighing at least two proposals:

1) Turn all of City Schools of Decatur’s current K-3 schools into K-2 schools, make the 4th and 5th grade Academy a 3-5 school and build a second 3-5 school. Another notable aspect of this plan would be retaining College Heights as an early childhood learning center.

2)  Keep the current K-3 configuration while building a new 4-5 Academy.

CSD conducted a survey about the two proposals last month. Decatur’s steering committee on elementary education supports the first option. But ultimately it will be up to the School Board to pick either option or none of the above. David Dude said it’s important that the board vote before the school year ends so there’s no perception that the board is doing something while the public isn’t paying attention.

At the May 9 meeting, School Board members will also consider a $2.5 million contract to place portable classrooms at three schools. According to the board meeting agenda, Winnona Park Elementary, Oakhurst Elementary and the 4/5 Academy would each receive four portable classrooms.

The letter says that transferring these students to another CSD school is not an option. It says, “each grade level all five CSD K-3 schools are at capacity or too close to capacity this year to guarantee [transfers] will work moving forward.”

The School Board meeting begins at 6:30 p.m. and there will be an opportunity for public comments, as there is at every board meeting. The meeting will be held at 125 Electric Avenue Decatur, GA. All meetings are open to the public.