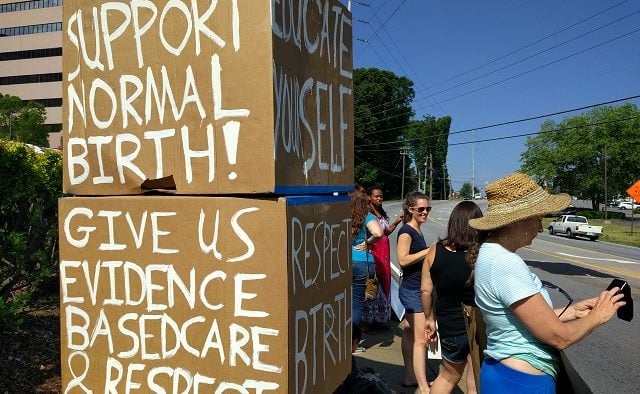 Protesters gathered in front of DeKalb Medical on Friday morning, May 19. Photo by Dan Whisenhunt
Share 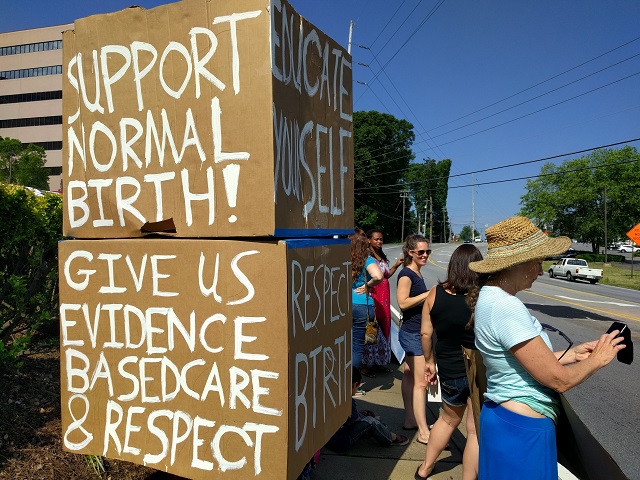 Protesters gathered in front of DeKalb Medical on Friday morning, May 19. Photo by Dan Whisenhunt

For the second time in a year, protesters have stood in front of DeKalb Medical in opposition to the hospital’s birthing policies.

On Friday people held signs with messages like “Support Normal Birth” as some drivers along North Decatur Road honked to show support.

In a statement the hospital said it “strives to provide great birth experiences” to families.

The protest was triggered by the suspension of privileges for Dr. Brad Bootstaylor and his practice, See Baby, after a vaginal breech birth of twins. One of the babies fractured her humerus during delivery, but the parents have vouched for Bootstaylor and wrote a testimonial about their experience. It is the second time in less than a year that the hospital has put restrictions on his practice.

Last August, a controversy erupted when DeKalb Medical temporarily suspended water birth at the hospital. The hospital also barred Bootstaylor from delivering babies using forceps, performing Vaginal Births after C-sections, called VBACs, and performing vaginal breech deliveries, his office said at the time. His ability to deliver babies using these methods was later restored. Prior to that incident, there was a laceration around a baby’s ear during forceps delivery, Bootstaylor said.

Zawn Villines organized the protest last August and held her eight month old daughter Athena during Friday’s protest. She said the protest wasn’t specifically about Bootstaylor and noted that some women there weren’t a fan of his practice. The larger issue,  she said, is about the rights of patients.

“This is a hospital that keeps changing policy without warning affecting what happens to women in labor and then doesn’t communicate with us,” she said.

The end result is laboring women being forced into things they don’t want to do, she said.

DeKalb Medical’s statement did not directly address its decision to suspend the popular delivery doctor.

“DeKalb Medical ‘s obstetrical service is a progressive, high-quality, family-centered program that strives to provide great birth experiences,” the hospital said. “We embrace the use of midwives, doulas, water immersion for labor and water births for low risk pregnancies, and will soon be among the first hospitals, if not the first in Atlanta to offer nitrous oxide as an option for pain management. Patient safety is a top priority so we routinely review our policies around birth options and our policies are aligned with the accepted standard of care.”

Cindy Morrow, a home birth midwife, said DeKalb Medical’s changing policies sent one woman into her care, who opted to have a home birth instead of at the hospital. She doesn’t work for Bootstaylor, but she agrees with his philosophy.

See Baby announced plans to deliver babies at Atlanta Medical Center starting June 1. In a previous interview, Bootstaylor said DeKalb Medical is scrutinizing his practice because he offers women and families choices, which causes other women to question hospital policies.

Morrow said she doesn’t believe the hospital’s decision to suspend Bootstaylor has anything to do with the safety of moms and babies.

Villines said it would be hard to find any obstetrician who hasn’t had something go wrong in the delivery room.

“There are horror stories about a lot of obstetricians and that is because we have a really bad maternal health problem in this country,” she said. “It’s very hard to find an obstetrician who does not have horror stories, and it’s partially due to hospitals like this that allow lawyers to dictate medical policy.”