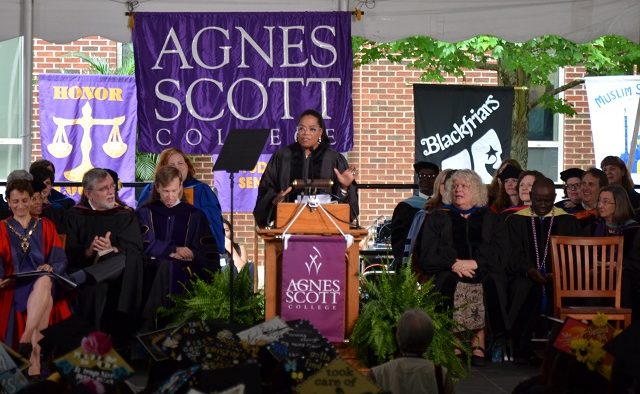 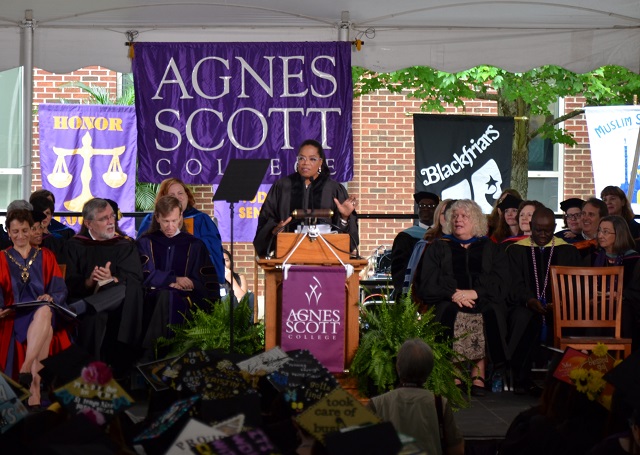 You are nothing if you are not the truth, Oprah Winfrey told a class of Agnes Scott graduates Saturday morning.

She added, “But if I could leave you with any message today it is the biggest reward is not financial benefits. You can get a lot of great shoes. But those of you who have a lot of shoes, a closet full of shoes, or cars, or houses know it doesn’t fill up your life. Living a life of substance can. Substance through service, your offering of your whole self.” 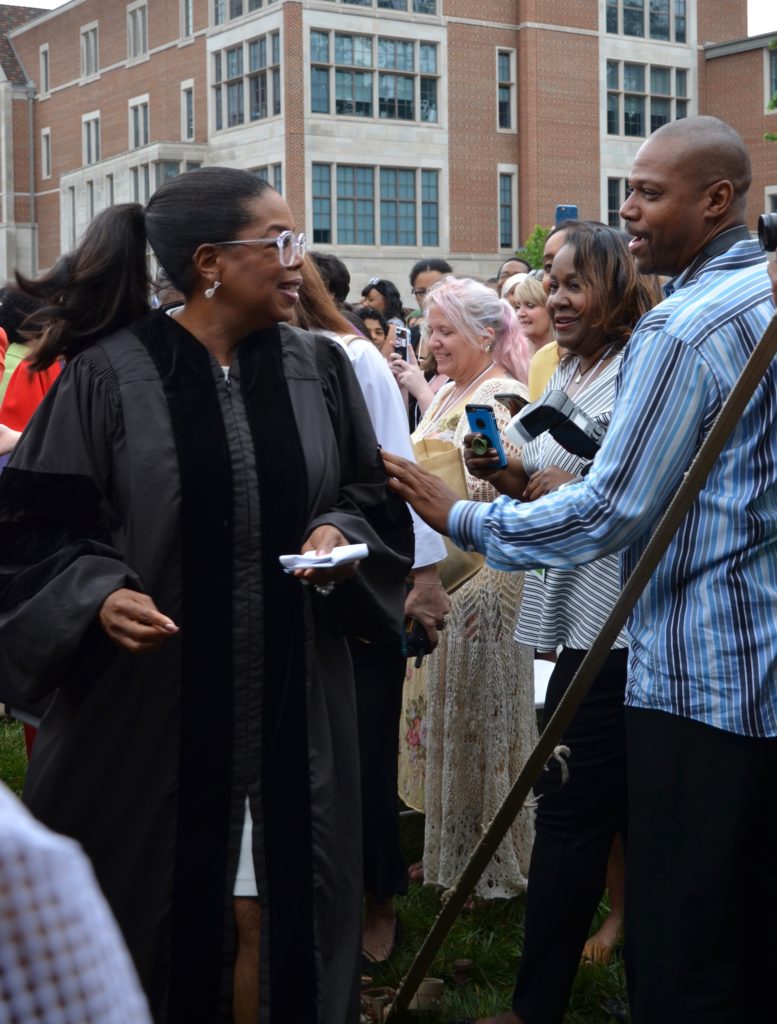 An audience member reaches out to greet Oprah Winfrey as she walks in to deliver the commencement address at Agnes Scott College in Decatur Saturday morning. Photo by Mariann Martin.

Winfrey delivered the 128th commencement address at Agnes Scott College in Decatur to an enthusiastic audience of more than 200 graduates, as well as faculty, families and friends. She was also given an honorary degree during the ceremony.

Nearly two hours before Winfrey began speaking, the large crowd hurried to claim the best seats in the audience, clearly anticipating a glimpse of the famous media icon. When she finally walked down the aisle to take her seat, everyone crowded in to snap pictures.

“I’m starstruck,” one person whispered as she walked by. “I’ve never been starstuck before.”

A global media leader, philanthropist, producer and actress, Winfrey hosted the premiere talk show in the United States for 25 years and runs a multi-media empire that includes a magazine, a cable channel and movie production company. She also has appeared in numerous films and was nominated for an academy award for “The Color Purple.” In 2013, she was awarded the Medal of Freedom, the nation’s highest civilian honor.

Agnes Scott College President Elizabeth Kiss said Winfrey has topped the list of students’ requested commencement speakers for many years. More recently, Winfrey developed a connection with the college when one of the students from her school in South Africa attended Agnes Scott and was part of the 2017 graduating class. Additionally, Winfrey recently starred in an HBO film, “The Immortal Life of Henrietta Lacks,” which was partially filmed on the school’s campus.

“It just shows you that annoying persistence and dumb luck sometimes pay off,” Kiss joked.

Kiss also alluded to Oprah’s popularity and speculation about a future in politics, saying “There really nothing she can’t do. Maybe, just maybe, she will run for president.”

“I cannot think of a more perfect commencement speaker for Agnes Scott…and for this moment in history,” Kiss said. “She created an unparalleled connection with people around the world, making her one of the most admired and respected people alive today.”

Winfrey said she has missed her TV show in the last year because she misses the opportunity for the spirit constructive engagement the platform offered.

She told the story of bringing together a group of women two weeks after the election, half of them supporters of Hillary Clinton and the other half supporters of Donald Trump. No one wanted to come out to the meeting, and everyone was tense to be in the same room. But after two hours the women were listening to each other, holding hands and exchanging phone numbers.

“It is possible. It can happen. So I want you to work in your own way to change the world in respectful conversations with others…And I want you enter every situation aware of its context, open to hear the truths of others, and most important, open to letting the process of changing the world change you.”

Winfrey also urged the graduates to let failure be their friend. She talked about struggling after she ended her show and launched her own cable channel.

“Winning is great. It is fantastic,” she said. “But it is the times when things go wrong, when you fail, you are actually going to learn the most about yourself.”

She described one time she met with her mentor, the poet Maya Angelou. Winfrey was telling Angelou about her girl’s school in South Africa and how that school was going to be her legacy.

Angelou corrected her, saying she has no idea what her legacy will be, that no one does.