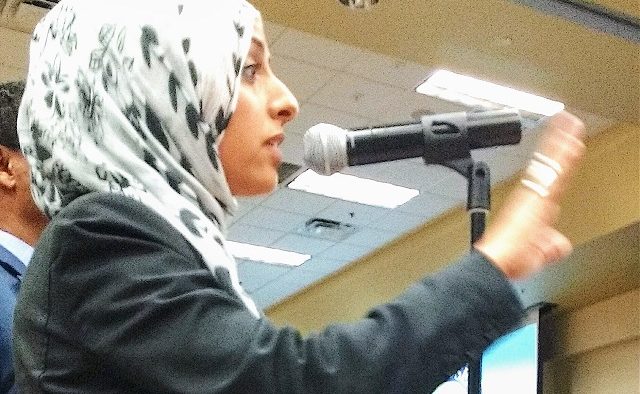 A speaker, Asma Elhuni with CAIR, confronts ICE officials during a May 10 meeting in Clarkston. Photo by Benjamin Kweskin

Over the past couple of weeks, ten Somali nationals have been detained by ICE throughout Metro Atlanta and are now facing deportation. Some were picked up at their jobs, in their homes, and in some cases, it is alleged that ICE used false pretenses to detain them.

It initially appeared that members of the media would be barred from entering. After Decaturish protested the decision, Johnson personally intervened to allow the media to attend.

Dozens of activists were in attendance. There were several representing refugee-resettlement agencies, members of the refugee community in Clarkston, human rights groups, concerned citizens, attorneys, elected officials, and several family members who spoke on behalf of their loved ones. There were also 10 representatives from ICE. Of the ten ICE representatives on the stage, only three spoke at length: Richard Rocha, Brian Cox, and Sean Gallagher. The meeting follows the decision earlier this month by the Clarkston City Council to limit its cooperation with ICE though it faces federal sanctions for its policy. Half of Clarkston’s citizens are foreign born.

Rep. Johnson opened the meeting, telling the audience that “today this [situation] is an emergency and this meeting is a response to the feeling of terror” inflicted upon the local refugee community and the Somali community in particular.

President of the Somali American Community Center, Omar Shekhey, said that while Somalis have been lawfully coming to Georgia since the late 1970s, they now feel that they are being singled out, and profiled. “We are terrified and scared. This policy is not rational,” he said.

During the Q&A period, Naima Musse, whose husband Abdusalam Hussein is currently detained said, “If they go back to Somalia, al-Shabaab [an extremist group allied with Al-Qa’ida] will think these people are too secular, or American spies; here they are profiled as criminals and terrorists.”

She added, holding back her tears, “Who will take care of them there? The pirates? The extremists?”

Until this year, the U.S. State Department did not deport people to Somalia because of the famine and unrest and because the Somali government did not issue travel documents. Earlier this year, the State Department authorized the first US Ambassador to the country in 25 years, which implies in part that the country has become more stable and thus those lacking status for a variety of reasons may be eligible for “removal,” ICE says.

However, as one concerned citizen noted, “the embassy is not functioning. If you call them, no one answers. The ambassador is under guard and heavily protected. What do you think will happen to average people who are deported back?”

In many cases those “eligible” include people who have been in the U.S. for decades, married U.S. citizens, and have U.S. citizen children.

Attorney Latrice Latin, who is representing most of those detained, said that the facilities they are detained in—most are in the ICE detention facility in Irwin County, a three hour drive south from Atlanta—have deplorable, unsanitary conditions. They don’t have clean clothes or underwear, lack proper bedding, and the men (all Muslim) are being fed pieces of bologna, which is against their faith because it is often made out of pork.

Earlier this month, Project South and the University of Pennsylvania issued a damning report highlighting the conditions in Georgia’s two immigration detention facilities. Stewart detention facility is privately run by Corrections Corporation of America. Of particular note is the food, which is often uneatable, and sometimes contains insects, rodents, and other foreign objects.

One detainee, whose son later spoke about his father’s needs, apparently went on “suicide watch” after he became erratic due to being unable to access his prescription medication. Another detainee is already in bad health, yet remains without proper health care to take care of his liver condition.

Yet another, Marian Dine, a legal permanent resident, was evidently detained after ostensibly being told that her fingerprints were needed again. Upon complying as she did every month, she was held by ICE officials. She was arrested several years ago for shoplifting, but was still allowed a work permit despite having her green card revoked.

ICE spokesperson Brian Cox called such allegations “blatantly false,” saying that ICE merely implements and follows the law and that it does not use illegal means to detain people. He added that all of those detained have been seen by a federal judge who ruled that these people are ineligible for status in the US and thus “removable.”

Rocha, another ICE employee, added that ICE “does not do raids or set up checkpoints” and Gallagher, an ICE Field Office Director, said that the ICE detention facility conditions are “over and beyond…our standards are better than most county jails in the U.S. We provide religious meals and our conditions are exceptional.”

Gallagher added, “there are rumors about checkpoints from social media and other ‘fake news’ but what ICE does is targeted enforcement.”

Noting that many in the crowd scoffed and were in visible disagreement with ICE’s response, Cox said somewhat testily, “You can believe what you want to believe but I’ve been to these facilities and eaten their food, and they comply with [federal] standards.”

Cox added, “A person with refugee status has nothing to fear.”

Many advocates and family members told the audience and ICE representatives that, yes, most of the 10 Somalis in question have been convicted of minor crimes and in some cases the crime took place decades ago and that they are now law-abiding citizens.

Rep. Johnson said there were no federal judges nor representatives from the detention facilities present. After urging from the concerned and at times emotional audience, the congressman said that he would soon be traveling to Irwin County’s detention facility to survey the conditions of those detained.

“There seems to be a great deal of injustice in the immigration courts,” he said.

Georgia has the highest percentage of deportation in the U.S., according to the Southern Poverty Law Center (SPLC).