Open House will be held for Moreland Avenue improvements

Open House will be held for Moreland Avenue improvements 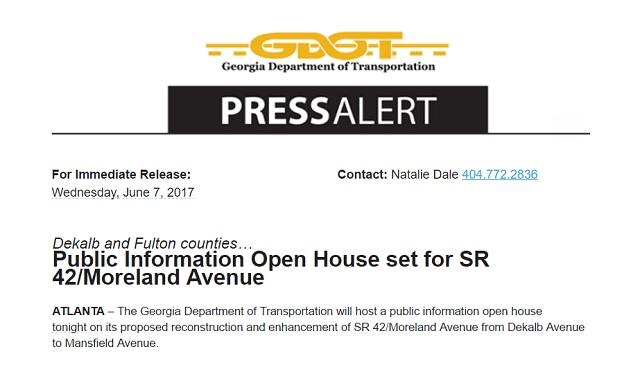 The Georgia Department of Transportation is seeking input on improving Moreland Avenue from DeKalb Avenue to Mansfield Avenue.

The open house will be held from 5 p.m. to 7 p.m. at Mary Lin Elementary School, located at 586 Candler Park Drive NE.

The purpose of this project is to improve operations and safety along the corridor. To that end, Georgia DOT proposed operational and safety improvements include:

Other improvements between Dekalb Avenue ramps and the Euclid/McClendon Avenues include:

The proposed project is approximately .4 miles located within Dekalb and Fulton County. Residents interested in learning more about the proposed project are encouraged to attend the meeting and express their concerns. Project displays and detour maps will be available at that time. Georgia DOT representatives will also be there to discuss the project and answer questions as no formal presentation will be given.

You can provide your comments by Wednesday, June 19th by using the following methods: