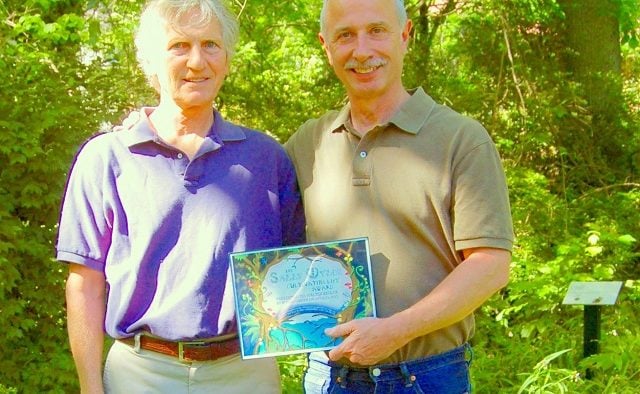 Walter Kellar (right) has received the Wylde Center and City of Decatur’s 2017 Sally Wylde Cultivating Life Award. He was nominated for the honor by his friend Leonard Thibadeau (left). Photo provided by the Wylde Center.
Share Walter Kellar (right) has received the Wylde Center and City of Decatur’s 2017 Sally Wylde Cultivating Life Award. He was nominated for the honor by his friend Leonard Thibadeau (left). Photo provided by the Wylde Center.

The award, which was named for the late activist Sally Wylde, is given to community members who make significant local environmental changes. Kellar was recognized for helping to conceive and create the Tanyard Creek Community Garden on a creekside floodplain in Decatur, a press release from the Wylde Center says.

Kellar owns a home that borders on a parcel of land owned by the city of Decatur and is identified as an overflow area for periodic flooding of Tanyard Creek due to extreme rainfall. While the area was maintained by the city, it was only being used to keep potential floodwater contained. Kellar approached the city and his neighbors with his idea of creating a community garden on the property.

“Walter held meetings in his home to organize a gardening group and enlisted a landscape architect neighbor to create a plan for the site,” Leonard Thibadeau, who nominated Kellar for the award, said in the press release. “He created bylaws and disclaimers to meet the city’s requirements.  Today, there are about 30 gardeners working in 30 gardening plots. The garden is completely organic and maintains a 25-foot natural buffer to the creek, per the city’s requirements. The garden and creek are home to hawks, owls, rabbits, otters, small fish and crayfish. In addition to the vegetables and flowers that are grown, blueberries, figs elderberries, blackberries, mayhaws and pawpaws have been planted and are flourishing.”

“Thanks to Walter’s idea and efforts, he and his neighbors have transformed an underused city greenspace into a beautiful and productive garden,” Van Parys said in the press release. “He and his neighbors have become a community of gardeners and have created a productive oasis in the heart of the city. Just as our founder Sally Wylde did in her own neighborhood, Walter has connected people and plants and exemplified the Wylde Center’s mission of environmental stewardship. He is a perfect recipient for the Sally Wylde Cultivating Life Award.”