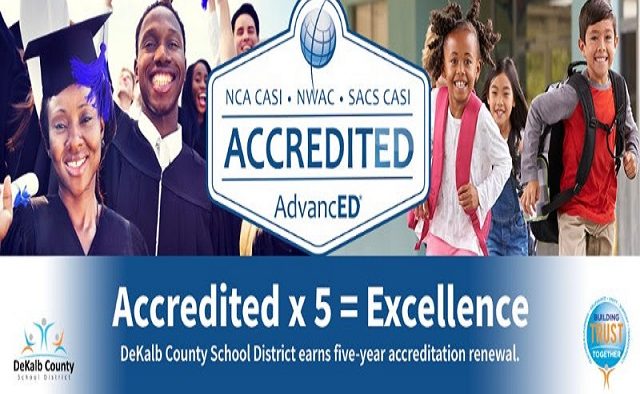 DeKalb County Schools finally has some breathing room now that its accreditation has been renewed for several years.

The county says it received notice from AdvancED that its accreditation, which was fully restored in 2016, has been extended through 2022.

DeKalb was placed on “accreditation probation” in 2012. That prompted Gov. Nathan Deal to remove six school board members from office.

According to an article published by Reporter Newspapers in 2012, the AdvancED report was unsparing in its criticism of the school board, accusing board members of meddling in day-to-day operations and finding that nepotism – the hiring of relatives – was prevalent throughout the system. To read more about the original report from 2012, click here.

The school district said a 25-member AdvancED team studied numerous aspects of the school system over the past year. The team included educators from Georgia, Florida, South Carolina and Alabama.

“DCSD scored at or above the average for reviewed institutions in three core areas: teaching and learning impact, leadership capacity and resource utilization,” the announcement from DeKalb County Schools says.

Here is the full announcement from DeKalb County Schools:

STONE MOUNTAIN, GA. – In 2015, the DeKalb County School District (DCSD) was fighting to regain its accreditation through AdvancED, a global education review organization. Today, the pendulum has swung in the opposite direction. DCSD has received a five-year renewal of its accreditation.

“This school district is relentlessly marching to higher levels of student achievement, and this renewal is proof positive we are on the right path,” said Superintendent/CEO R. Stephen Green. “We’re grateful for the result, and it is the product of much hard work by our students and staff. We’ve moved from just seeking accreditation to a long-term renewal in just 24 months. That’s how you rebuild trust with your community.”

The governing board of AdvancED, a global organization that reviews school districts and education entities, notified DCSD of its decision this week. The renewal extends the district’s full accreditation, which was originally earned in 2016, through 2022.

The renewal marks another milestone for DCSD, which was not fully accredited by AdvancED between 2011-2015.

The results, unveiled in a preliminary report in March, were clear. DCSD scored at or above the average for reviewed institutions in three core areas: teaching and learning impact, leadership capacity and resource utilization.

The review team was able to determine several overall themes, according to its report to the School Board. Those include:

In particular, DCSD was recognized for having two “Powerful Practices” that denote excellence. One recognition went to Coralwood Center for delivering highly effective specialized learning for special needs preschool students. Dr. Green was also recognized, in the words of the AdvancED Review Team, for being a “visionary leader who is passionate, supportive, inclusive, instructionally focused, and dedicated to making decisions that are in the best interest of students.”

“Just two years ago, just earning full accreditation was a goal,” said Green. “We have earned this renewal by doing the right thing: providing quality leadership, enhancing deep teaching and learning for our students, and utilizing taxpayer resources effectively. We’re proud of this milestone, but the work continues.”