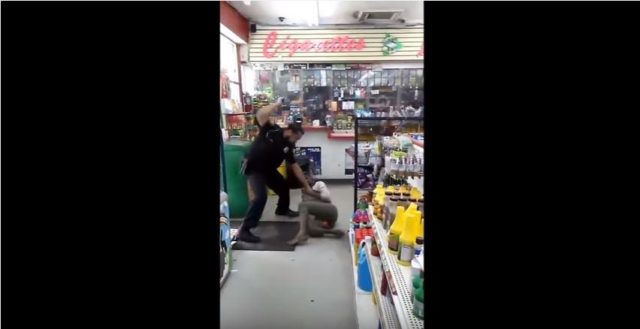 DeKalb County Police are reopening an investigation into a police officer after video surfaced of him beating a woman with a baton. YOUTUBE.COM
Share

DeKalb County Police are reopening an investigation into a police officer after video surfaced of him beating a woman with a baton.
YOUTUBE.COM

The DeKalb County Police Department is reopening an investigation into one of its officers after video surfaced of the officer beating a homeless woman inside a convenience store. The officer has been placed on restricted/administrative duty, the department said.

The video, posted online, shows DeKalb County Police Officer P.J. Larscheid hitting the woman repeatedly with his baton. At one moment, she grabs his baton while he holds her down on the floor with his knee on her back and says “Let it go, or I’m going to shoot you.”

The video shows the woman, identified as 38-year-old Katie McCrary, asking the officer “What did I do?”

The incident happened on June 4 at a Chevron gas station in DeKalb County. DeKalb County Police said the officer was cleared following an internal investigation. But the department said it’s now reopening the case because of the video evidence.

“The investigation will cover all aspects of the use of force incident as well as the original investigation conducted by the officer’s immediate supervisors,” the police department said in a statement.

Francys Johnson, president of the Georgia NAACP, called for an independent investigation and for the officer to be fired.

“We’ve got to find a better way. No one seeing this video can walk away and say this should be the standard of policing,” he said.

The initial police report said McCrary tried to push the officer out the way when he walked into the store. According to the report, she was taken to the hospital for evaluation and was charged with obstructing a law enforcement officer.