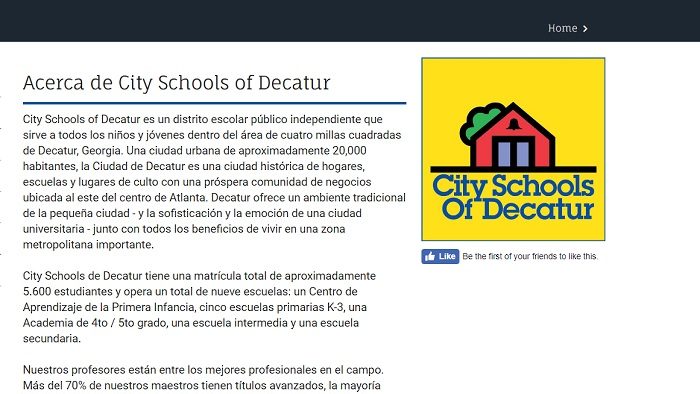 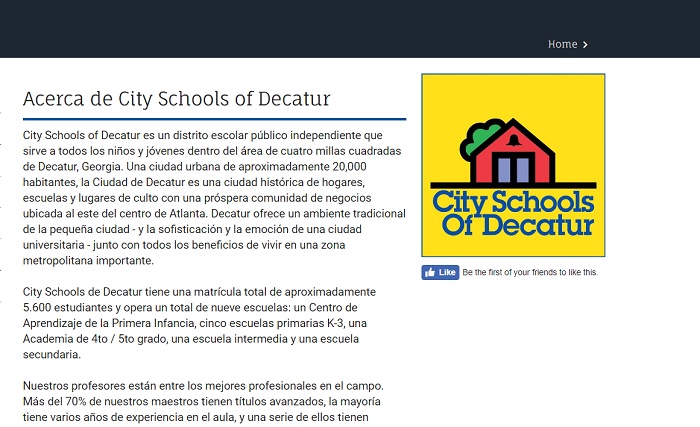 Screen shot of the City Schools of Decatur website translated in Spanish.

Beginning this school year, CSD will change the Spanish instruction time across its elementary schools from 120 minutes to 90 minutes per week.

The Spanish classes will be taught in 30-minute blocks, as they have been previously, which will now occur three times a week, instead of four.

The cuts were met with opposition from several community members. At the May 9 CSD Board meeting, twin sisters Michelle and Nancy Jones, both recent graduates of Decatur High School, spoke against the cuts.

Michelle, who is “diametrically opposed” to the cuts, spoke at the meeting because she “was lucky enough to benefit from the original, full program, which was intended to promote fluency in Spanish.”

“Elementary school is a critical time biologically/neurologically for foreign language learning in children, as it is the time they learn the quickest and easiest,” she said. “But it is also vital in instilling a young, early love of foreign languages and diversity in students.”

In a time where American perception of Spanish culture is becoming politicized, the Spanish program is more important than ever, according to Carmen Schlig, a longtime Decatur resident, who also spoke at the meeting.

“This issue is extremely important given the xenophobic anti-Mexican climate that prevails in our country since President Trump took office,” Schlig said. “Research has shown that bilingualism – in any languages – helps develop higher functions of the brain. Bilinguals obtain better grades overall and acquire a better understanding of humanity and other cultures.”

On the other hand, Westchester Elementary principal Rochelle Lofstrand believes the program will not actually hinder students’ ability to become bilingual. Rather, the changes will allow Spanish instruction to be integrated into the curriculum in other ways.

With the previous Spanish schedule, Spanish teachers were on such a tight schedule that they were unable to go to collaborative meetings with grade-level teachers and couldn’t participate in other parts of class, Lofstrand said. Now, they can interact with other teachers and students more, including during the daily morning meetings each class holds, which Lofstrand says are an “integral part of who we are as a school community.”

“We’ll be essentially continuing the 120 minutes without having it be a set-aside Spanish block,” Lofstrand said. “Now, [the teachers] can go to the morning meetings and participate in those in Spanish. The students are getting the same amount of Spanish education, but in a different way.”

Lofstrand and the other elementary principals saw other benefits for teachers, as well.

“There’s literally not enough time in the week for everything we have to do curriculum-wise,” she said. “Now, we’re able to have more wiggle room in the schedules, so Spanish teachers can come to other classes and participate in those as well.”

While Michelle Jones understands that the cuts were proposed to benefit the staff and curriculum across CSD’s elementary schools, she believes they will weaken the Spanish education program in the long-term.

“The quality of the overall education we are providing our kids, not simply the Spanish program, would decrease, and we would be less able to attract qualified Spanish instructors to ensure the little time given is quality instruction in a foreign language,” she said.

Because more and more Decatur students like herself take classes through the IB Diploma Program, an internationally based system, Jones thinks Spanish education should begin early. Although Decatur’s elementary schools are not a part of the IB program, the IB curriculum begins soon after, so Jones says it’s key to begin as early as possible.

“This is something we should be promoting as part of our participation as an International Baccalaureate district, not slashing,” she said.

Schlig, who also teaches Spanish at Georgia State University, agrees. She believes students who start early on with Spanish education have more success with bilingualism.

“I have seen the results of students taking Spanish at an early age and becoming fluent by the time they graduate,” she said. “My neighbors’ kids, my friends’ kids, and the students who spoke up at the school board meeting [have benefitted greatly].”

Michelle Jones also believes that more care could have been taken with the school system’s decision.

“I do not believe that Dr. Dude and the Board allowed sufficient research to be conducted on how this cut would impact our kids or provided sufficient time for the Decatur community to fully understand the cuts and present valid concerns or support,” she said.

While Lofstrand understands the opposition, she hopes that people can see the underlying ways Spanish is continually being integrated into elementary education.

“They see it as a slippery slope, like if we cut a little here and cut a little there, we will ultimately cut down the program altogether, but that’s absolutely not where we’re headed,” she said. “If people could come to the elementary schools and see how integrated the learning is, they would realize that it’s still just as big of a part of our identity as it always has been.”