Navy veteran finds success with YouTube channel about the military

Navy veteran finds success with YouTube channel about the military 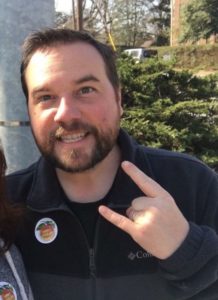 With more than 1 million views on his videos, Gabriel Owens is making a name for himself on YouTube as the Salty Seaman. The Decatur resident, a 20-year Navy veteran who left the service as a E6/Petty Officer First Class, uses his channel to “give his opinion, insights, and humor about military related issues,” according to his profile. And, of course, “the occasional geek related topic,” too.

Owens, who is also a freelance writer for Decaturish and Atlanta Loop, began his channel to satisfy his imagination while stationed abroad. He found that making videos was the best solution. His videos focus include discussions about military news and also poke fun at movies with his “Military Movie Bull$hi+” series.

“I’ve always had a creative bug in me and wanted to get it out, whether it was story writing or half-baked plans to make amateur documentaries,” Owens said. “When I was stationed in Japan at a radio and TV station my last tour, it inspired me to start publishing content, and YouTube was the perfect platform.”

Owens originally wanted to cover pop culture, like movies, and whatever else he “fancied to talk about.” Then, he decided he needed to do something more unique.

“There are 800 billion people on YouTube who do that, and a lot of them do it a lot better than I do,” Owens said.

Owens noticed that his only military-related video, about tips for joining the Navy, was by far his most popular. He also noticed a lack of military content, beyond a limited number of channels. So, he decided to focus his videos on the military instead, while still incorporating his other interests.

Now, Owens’ experiences in the Navy and familiarity with media and culture have shaped his channel into a thoughtful collection of commentary, one that has almost six thousand subscribers.

“Without my experience as a Navy mass media specialist, I wouldn’t have the skills to execute [the videos] properly, and if I didn’t have 20 years’ experience in the Navy, I wouldn’t know what I was talking about,” he said.

Owens has published around 50 videos has no plans of stopping any time soon.

“I enjoy it when something gets really popular. It’s validation that I’m not just talking to myself,” he said. “I hope to keep making the kind of content I want and hope my channel continues to gain subscribers and fans. The kind words and even the trolls I get on my page keep me coming back to make [better] stuff.”