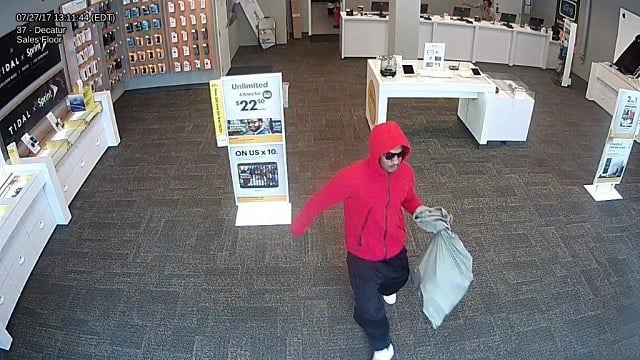 Photo of a suspect in the Decatur Sprint store robbery, provided by Decatur Police.
Share

Photo of a suspect in the Decatur Sprint store robbery, provided by Decatur Police.

Decatur Police are looking for a man who robbed the Sprint store on West Ponce de Leon on Thursday, July 27.

According to police, officers responded to the call at 1:11 p.m.

“The complainant reported the suspect entered the store and ran toward her with his hand under his shirt as though he had a weapon,” the Police Department said. “The suspect demanded she open the safe and took miscellaneous phones and fled westbound on foot.”

Anyone with information about the suspect is asked to contact Inv. Melvin at 678/553-6664 or [email protected] Tipsters who wish to remain anonymous can call Crime Stoppers at 404/577-TIPS(8477).