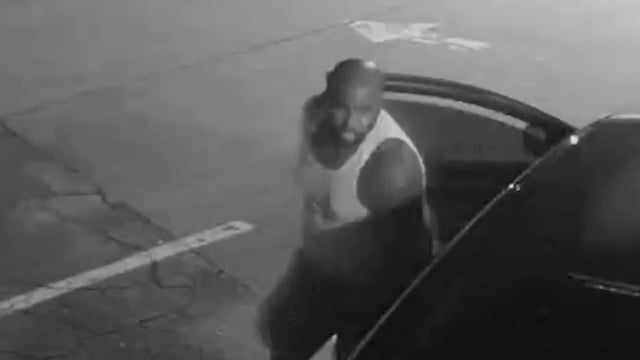 Atlanta Police are seeking the identities of suspects accused of breaking into Fox Bros Barbecue on Wednesday morning, July 5.

Police released surveillance camera footage which shows the suspects and their vehicle as they backed up to the business to load the safe into the vehicle.

Atlanta Police responded to the call around 4:12 a.m. Wednesday morning. The officers found the front door ajar and saw the bolt to the lock was damaged. Officers did not find the suspects inside the business.

“The business office appeared to be ransacked and disorganized,” the police report says.

The suspects made off with a 200-to-300 pound safe containing around $9,383.  The surveillance video showed two suspects walking up to the business at 3:55 a.m. coming from Elmira Place Northeast.

“As the suspects were inside they pried open the door to the office and removed the secured safe from its foundation and rolled it to the front door,” the police report says. “At 3:59 a.m. a dark colored newer model Ford Fiesta or Fusion entered the business’ parking lot from Elmira Place Northeast and stopped near the front door.”

The first two suspects walked out off the business and got into the vehicle. The first suspect was apparently on his phone as he was leaving the business. The vehicle returned at 4:03 a.m. to retrieve the safe.

“As Suspects #1 and #2 did this, Suspect #3 exited the vehicle from the driver seat smoking a cigarette and helped with moving the safe into the back seat of the vehicle,” the police report says. “Once the safe was inside of the vehicle, Suspect #1 drove away from the scene going west on Dekalb Avenue.”

Police described the suspects as follows:

– Suspect No. 1 is a black tall male carrying a long handle tool. Suspect No. 1’s attire was a black hoodie, black skinny pants and Jordan retro 12’s shoes (black and white). Suspect No. 1 also has a low trimmed beard and a low hair cut.

– Suspect No. 2 is a black medium built male wearing a black hoodie, black pants and red shoes. Suspect No. 2 has a clean shaven face and a medium length hair cut. Both suspects initially had their faces covered but removed the cover during the crime, police said.

– Suspect No. 3 is heavy set black male wearing a white tank top (wife beater) and shorts. Suspect No. 3 also appeared to be bald.

The report says at 4:34 a.m., an officer received a call at 207 Haygood Avenue S.E. The caller said men were trying to break into the caller’s vehicle.

When the officers arrived, they saw two to three men running from a black 2016 Ford Fusion. One of the suspects matched the third suspect’s description. Officers weren’t able to catch the suspects, but they found the safe on the ground near the vehicle. The safe had the Fox Bros logo on it. Everything inside the safe was accounted for, the police report says.

“Anyone with information on this case is asked to contact Crime Stoppers Atlanta,” an alert from the Police Department says. “Any information on the case can be submitted anonymously to the Crime Stoppers Atlanta tip line at 404-577-TIPS (8477), online www.crimestoppersatlanta.org or by texting CSA and the tip to CRIMES (274637). Persons do not have to give their name or any identifying information to be eligible for the reward of up to $2,000 for the arrest and indictment of the suspects.”