The monument in downtown Decatur. Photo provided to Decaturish
Share

The monument in downtown Decatur. Photo provided to Decaturish

The city of Decatur reports that it had to clean off the controversial Confederate memorial on the square this week after someone smeared feces on it.

While the monument is technically the county’s responsibility, the city says it moved in to take care of the mess.

“We have full time regular staff assigned to maintain the Square,” City Manager Peggy Merriss said. “It was a public health issue that needed to be resolved. Our staff acted appropriately in addressing an immediate issue.”

The monument has been in the cross hairs since a violent white supremacist rally in Charlottesville, Va that resulted in the deaths of three people. A petition for its removal has received nearly 2000 signatures. The monument is located by the old DeKalb County courthouse and was constructed in 1908. It is widely seen as a symbol of the Jim Crow era south, a not-so subtle message to black residents who would question the status quo.

City leaders have said they are listening petitioners and talking about how to move forward on their request, and state Sen. Elena Parent said she would support a bill to change state law to allow communities to decide for themselves whether these monuments are appropriate. State law prohibits the removal of such monuments and the prospects for changing it in a Republican-controlled Legislature don’t seem likely. However, the state law says local governments can take  “appropriate measures for the preservation, protection, and interpretation of such monuments.”

On Friday, the group behind the petition demanded the city act quickly to remove the monument.

“Despite a similar law in place in Alabama, Birmingham Mayor William Bell ordered his city’s 1905 Confederate memorial be covered with plywood Tuesday evening,” the group said via email. “In a statement, Mayor Bell said ‘We look forward to the court system clarifying the rights and power of a municipality to control its parks absent state intervention.’ Likewise, DeKalb is now faced with the question of local choice and control, issues tantamount to the American political state. Though this section of Georgia law does not prohibit relocation of Confederate monuments, violation of the statute would constitute a misdemeanor charge. There are two possible punishments for a misdemeanor under Georgia law:  (1) fine of not more than $1,000 or (2) confinement for no more than 12 months.

“We ask, would the County Commission be willing to relocate this monument? Will they make a statement for our city and county that we do not support a symbol of hatred, violence, and white supremacy in our space? Can we not rise to the occasion like our sibling city in Birmingham?”

This Saturday evening, Aug. 19, there will be a discussion held around the monument to discuss plans for its removal. The event starts at 8 p.m.

The Beacon Hill Branch of the NAACP, based in Decatur, announced it is participating in a “Take Down White Supremacy March and Rally” in Atlanta at 6 p.m.

“The Beacon Hill Branch is inviting city of Decatur residents to join them as they travel via Marta 4:15 p.m. to Atlanta at the Decatur train station near the gazebo,” an announcement from the group says.

Here is a flyer for the event. 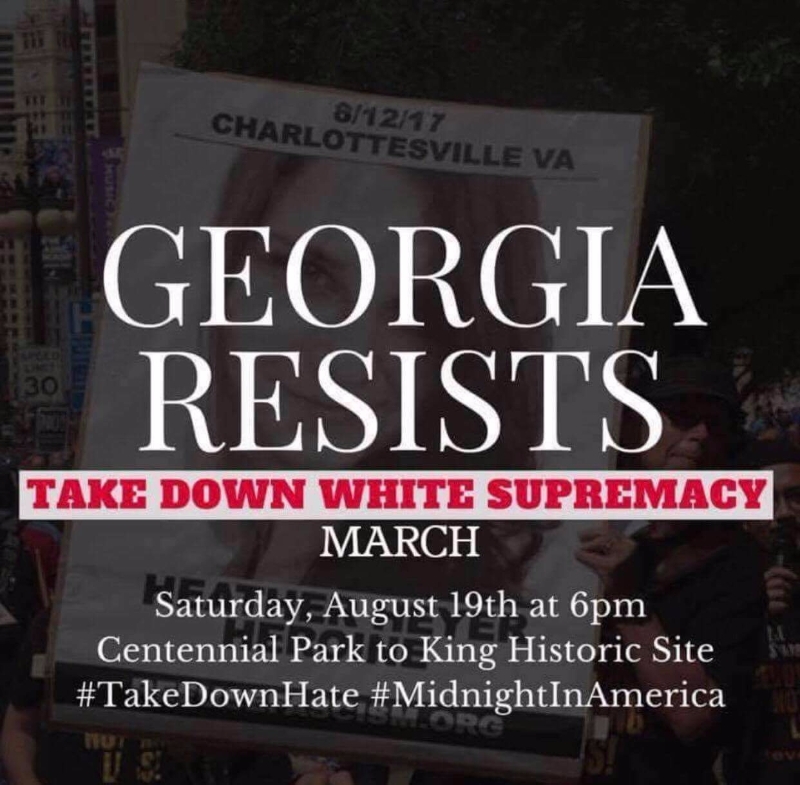