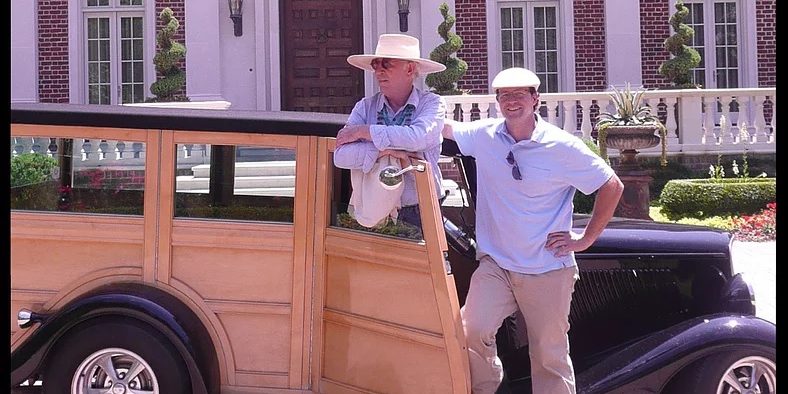 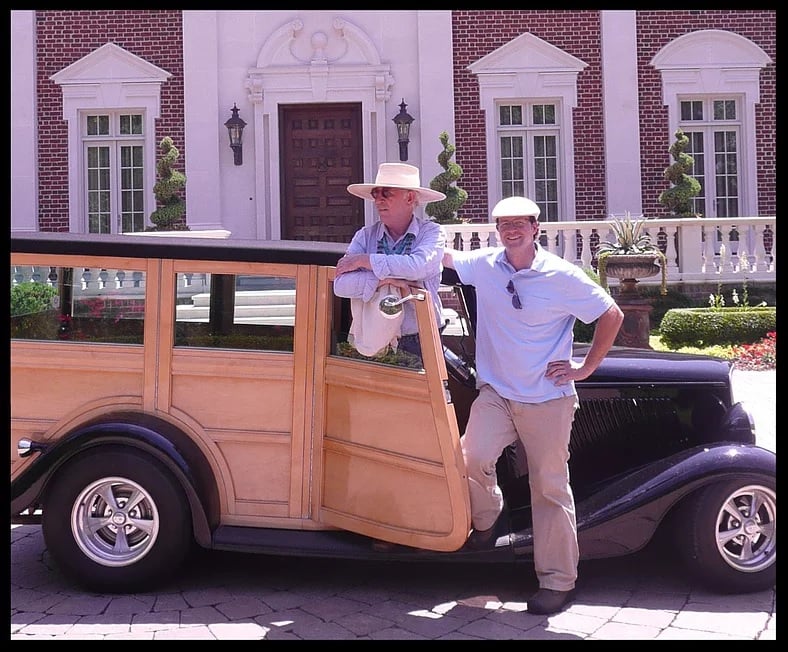 In early March 2010, I was on a quick trip to the Gulf Coast on my vintage BMW motorcycle. On the final day of my journey I decided to stop into Bellingrath Gardens just outside Mobile, Alabama. As I pulled into the visitor parking lot, little did I know my life was about to change forever. I dismounted my cycle, pulled it back up on the center stand with a thrust, peeled my sticky leather gloves off, removed my helmet and placed it on the seat. As I knelt down to open one of the attached hard luggage bags, my Motorola flip phone rang.  The Velcro on my pocket crunched as I fished for my phone. The screen read “Ryan Gainey Calling” as it shook violently and rang loudly. I answered with a hello and he cut right to the chase in his South Carolina drawl asking,“Mr. Wolfe will you buy my house next door?” I was caught off guard as this came completely out of the blue. I wasn’t in the market to buy a house at the time but told him I would come and take a look as soon as I got home.

It was six and a half years, a marriage, two children, a dog, a labor of love garden paradise, and several garden tours later on the warm summer night of July 29th, 2016 that my iPhone 6Plus rang and I got another call that would change the track of my life. It was about 8:40 p.m. and the caller ID displayed “Rick Goodness Grows”. I knew it was not going to be good. I didn’t want to answer, but I knew I had to. In a terrified tone, he said to me: “Tim I didn’t know who else to call but Ryan’s house is on fire, the fire department is here, and Ryan is missing.” It was less than an hour later that Rick called to confirm that they had found Ryan. That night, and every night for a week after, I left the greenhouse lights on next door to honor him and light his way home. 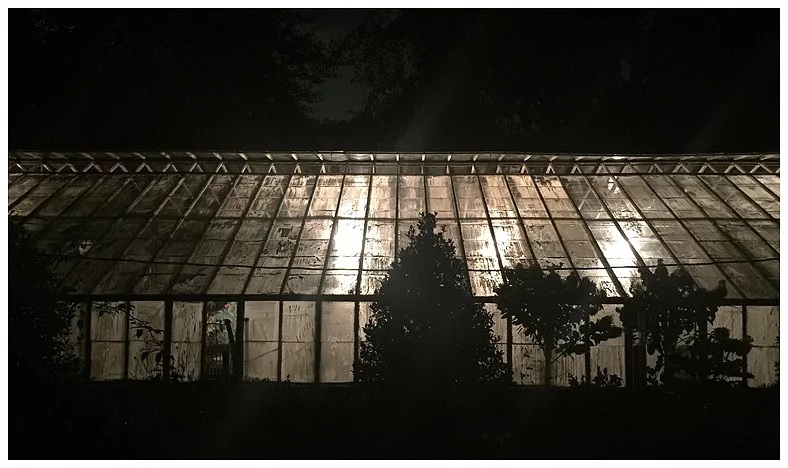 We didn’t know that night, but that summer would be the last summer we would spend sitting in our house and garden next door to Ryan’s Garden of Poetry and Prose.  Our world and many others’ worlds were forever changed and it just hasn’t been the same since. In the future, I plan to write more about our time living in our little, Decatur cottage and the unique experiences we had during the time we had with him. For today, I’d like to share with you some lessons I learned from him as a tribute to him.

1. Always carry a shovel: You never know when a horticultural-acquiring opportunity may present itself. This may be in the form of digging up a found or rare plant. Perhaps it’s growing in a roadside ditch or even on someone’s property. As Ryan would say, “They don’t even know what they have, therefore, they don’t deserve it, and I’m going to take it!”

2. Every day you are creating your legacy: Early in our friendship, I remember showing him a plan I was proud of which I had drawn for a client. He gazed at it and said, “This all looks fine but why are you only using common names for your plant names?” I gave some reason like the clients didn’t understand them or appreciate them. He said, “Mr. Wolfe, in everything you create, you are creating your legacy. How do you want to be remembered?” 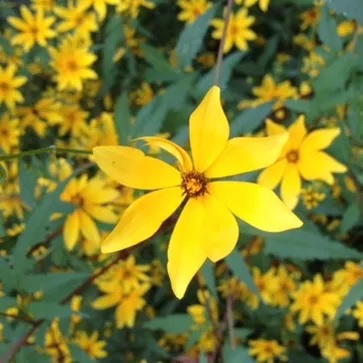 3. Keep your field guides handy: On one of my favorite hiking trails, beautiful yellow daisy-like flowers grow. Over the course of a couple years, I attempted to identify them. I spent hours searching Google images and various other online sources. I even asked several of my plant ID expert friends and we could not come up with a positive identification anyone was satisfied with. One day, I asked Ryan to drive with me to take a look. We arrived and walked over to a beautiful stand of the unknown flowers at the edge of a marshy field in full bloom. He touched them and began inspecting. He then touched a leaf and turned it over to inspect the underside. He said, “It’s Bidens. You need to get a wildflower book. I’m ready to go home now.” Sure enough, there in my wildflower book was Bidens aristosa Tickseed Sunflower. A world of information at my fingertips couldn’t help me in the way that good, old-fashioned knowledge could. Barely a day goes by that I don’t miss being able to call him with plant or plant identification questions or just to check in.

4. Educate your clients: I remember sharing a story with him where one of my clients wanted me to do something for them I didn’t agree with. As a design professional, this concept is nothing new and sometimes we have to do it anyway. This time was different. I don’t even remember what it was but I do remember that I felt pretty passionate about sticking with my guns. I knew he wasn’t too interested in my predicament, but he looked me in the eyes and with his stern, commanding voice told me, “Mr. Wolfe, as a designer, it is your job to educate your clients!” 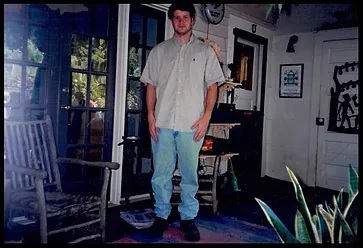 5. Always be dutiful in your vision: To the left is a photo of me from Mother’s day 1997. I was 23 years old and a young, aspiring designer. I knew I was somewhere important because look at me, I’m standing at attention. It was Ryan’s back porch during the Connoisseurs’ Garden Tour. My mom bought me a copy of “The Well-Placed Weed” while we were there. More than 10 years later, on one of my first visits as Ryan’s friend, for some reason I took my copy of his book to him. He saw it in my arms and said, “Where did you get that?” as he snatched it out of my possession and began to autograph it with a quill. In it he wrote: “Mr. Wolfe, Always be dutiful in your vision and your garden on earth will exceed all boundaries.

6. Leave the Leaves: These days, the air on any given day in the fall is filled with the whine of backpack blowers. Ryan once said to me “I like looking at the leaves on the ground. They are quite pretty. I don’t know why people feel the need to blow them all the time.” He used them as mulch in his garden and when he ran low he would acquire more by  grabbing bags from curbsides in the neighborhood. He told me he would think to himself, “I don’t know who you are, or why you put all these oak leaves in these brown bags, but I thank you.”

7. Be a resource: Many days would we would start with a discussion about a particular plant. From there, our conversations would usually continue throughout the day by phone. Each time we spoke, he had researched deeper and deeper by looking in his books or working his extensive phone network until the mystery was not only solved, but he knew what nursery had them for sale, how many they had, and how much they were.

8. You can find inspiration anywhere: As a seasoned designer, this was not a new concept to me. But I had to reevaluate the jurisdictions from where to pull those inspirations when one day Ryan said he wanted to show me something fabulous. We left his garden and headed to, of all places, Suburban Plaza in Decatur (this was before Walmart and recent renovations). Outside the building was a defunct courtyard. He said, “Look at those yaupons (Ilex vomitora), look how they are sheared, wouldn’t they look phenomenal in a formal garden with a geometric boxwood parterre under them?”  He then got out and photographed them like the paparazzi would a celebrity who just walked out of rehab.

9. Every plant has its place: This is no secret. Most people who knew of him know about the concept of ‘The Well-Placed Weed’. But on my first visit as a personal guest, I noticed poison ivy (Toxicodendron radicans) growing outside his kitchen window. I said “I like your poison ivy” in a sarcastic tone. In neither a bothered or unbothered tone, he said back, “It has beautiful fall color and it provides food to the birds.”

10. Give thanks simply: Ryan was a strong, eccentric, and often difficult personality.  But he never forgot to express thanks to anyone who gave him something or helped him in any way. Whether it be a card with a personal note of thanks, an old tin can filled with flowers, a jar of quince jam, or your dish returned clean with a Debutante Camellia resting upon it, Ryan’s old-fashioned manners have reminded us how much little things can mean.

I had no idea where I would end up, but between that call in 2010 and the call in 2016, I can look back and say I probably had one of the best adventures of my life.  As we closed the door of 121 Emerson for the last time on April 18th and drove away, I knew the story had ended. Today we had a picnic lunch in Ryan’s driveway in Lexington and left a tin can of flowers for him on his front steps.  Who knows when I’ll get the call that begins the next story? 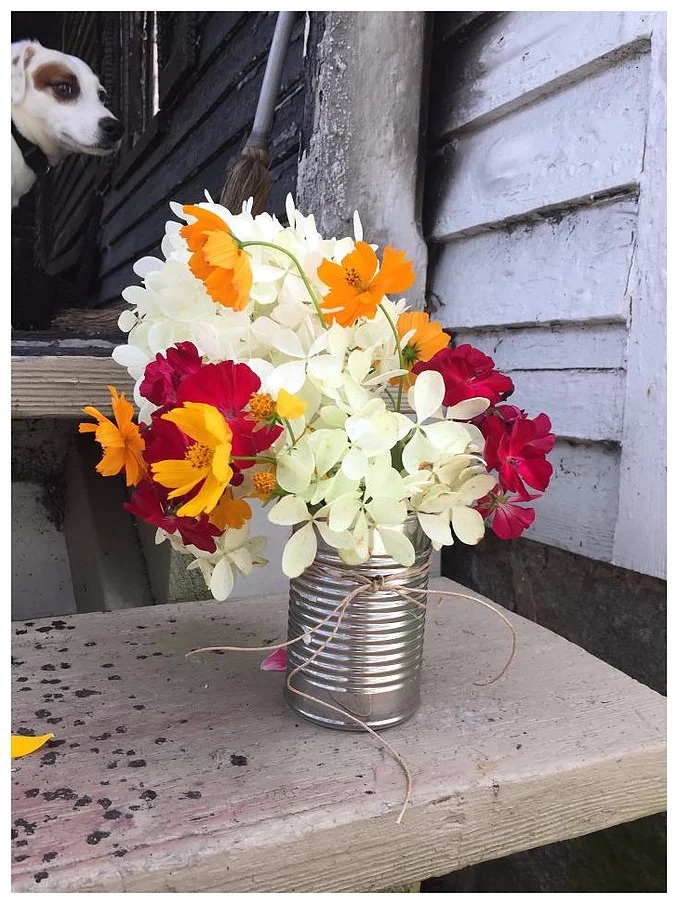