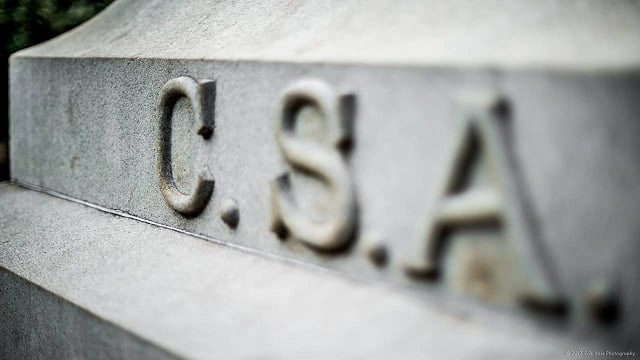 Photo of the inscription on the Confederate memorial in the Decatur Square, provided b Erik Voss.
Share

Photo of the inscription on the Confederate memorial in the Decatur Square, provided b Erik Voss.

We, the citizens of DeKalb County and the City of Decatur, petition you today for the removal of the Confederate memorial historically known as the DeKalb Monument.[i]

First, we hold that the Confederacy – created solely to serve the interests of the slave regime of the Old South – needs to be historicized as such. For African Americans, the Confederacy represents hundreds of years of terror, rape, brutalization, and enslavement; its monuments function as a constant reminder of an extremely painful past.

Second, even for a large percentage of white southerners, slavery was deeply harmful. It spurred forces that drove down their wages, took their jobs, pushed them off the land, denied them civil rights, and kept them languishing in cycles of poverty. The Confederacy sought to perpetuate their impoverishment.

Confederate monuments represent nothing more than fiction, an uncomplicated fantasy in which all whites proudly and bravely fought for the South – a South that is re-imagined without the attendant horrors of slavery.

Third, we contend that for all the viciousness, violence, and oppression associated with the Confederacy, it is even more important to understand the historical context in which the DeKalb monument was erected.

The earliest mention of a Confederate monument in Decatur occurred in early 1898, with an Athens paper proclaiming that “The Confederate veterans of DeKalb county are preparing to erect an imposing monument to the memory of the Confederate dead of that county.” That very same year, racist Democrats who ran the state promoted the all-white primary while turning a blind-eye to widespread lynchings and mob violence – leading to the de facto disfranchisement of African American men.[ii]

However, for some reason the monument was not erected until 1908, right on the heels of the incredibly violent Atlanta Race Riot of 1906, when angry whites slaughtered dozens of African Americans (some estimates are as high as one hundred), and injured many more.[iii]

As local observer George Chidi wrote, these monuments were largely “spurred by the United Daughters of the Confederacy and their Klan-linked push to move monuments from cemeteries to town squares and to civilize the concepts of white supremacy and Jim Crow in a post-Reconstruction South.”[iv]

The original obelisk was supposed to be dedicated on Nov. 9, 1907, but during inscription at the Butler Marble and Granite Company in Marietta, a cable snapped and the statue shattered, requiring several additional months to rebuild. The Agnes Lee Chapter of the United Daughters of the Confederacy raised the funds of around $2,000 from about a thousand local donors. By early March of 1908, Atlanta papers were eagerly anticipating the dedication of the new memorial.[v]

The DeKalb Monument’s official unveiling occurred at 10 o’clock in the morning of Saturday, April 25, 1908, in honor of Memorial Day. Confederate General Clement A. Evans, who was to accept the monument on behalf of the South’s veterans, had “three or four” other monument dedications to attend around the state as well. This fact resulted in each town “fixing separate dates for the observance of Memorial day, so that they might have General Evans with them.” Evans’ presence was necessary, local newspapers claimed, because “he will declare that the Confederate movement was founded in absolute truth.”[vi]

On the day of dedication, “youthful cadets…in khaki” from the Donald Frasier school stood in “battle formation” beside students from Agnes Scott. As “silence fell upon the thousand persons gathered in the courthouse square,” Rebecca Candler – dressed all in white – unveiled the obelisk by pulling “gently at the cord.” Candler was the youngest daughter of Charles Murphy Candler, an extremely wealthy Decatur politician.

“A cheer—a rebel yell perhaps—broke from the throng,” Atlanta papers reported, as “Confederate flags waved.” While the crowd reveled in the spectacle of the “splendid shaft,” former Confederates gave historically inaccurate, propagandistic speeches in which they tried to convince the crowd that disunion occurred over states’ rights – not slavery.[vii]

Although it remains unclear if he was actually in attendance, newspapers had advertised the previous week that Gov. Hoke Smith would give a brief address. Smith, one of the main instigators of the bloody Atlanta Race Riot, would also go down in Georgia history as the primary proponent of the state’s Grandfather Clause, which effectively disenfranchised all African Americans.[viii]

General Clement A. Evans accepted the monument on behalf of Confederate veterans, giving a short speech defending secession and lauding the bravery of southern whites. Placing the blame for the Civil War upon the North, Evans ironically concluded that Confederates “loved the union as they love it still.”[ix]

The primary speaker of the day, however, was Georgia Congressman Hooper Alexander, who issued the dedication of the monument in a winding speech detailing the state’s history. Deeming white southerners “a noble race,” he bragged about the incredibly deadly and inhumane process of Native American removal. “[S]trong in the high purpose of a civilizing instinct,” Hooper bellowed, brave white Georgians “pushed back the Creeks and the Cherokees towards the Western hills.” Much like his predecessor, Hooper ended his speech by referring to “the faiths of a covenant-keeping race.”

As soon as the speeches concluded, local public school children erupted “in a spirited Confederate song,” and Wedemeyer’s band played “The Bonnie Blue Flag,” “America,” and “Maryland, My Maryland.” They of course concluded with a rousing rendition of “Dixie.” To conclude the ceremony, the children and cadets the marched over to the Decatur cemetery to decorate the graves of the Confederate dead.[x]

Thus, in petitioning for the removal of the Confederate monument, it is also essential to understand what, exactly, the structure itself continues to memorialize in the present day. According to Gould Hagler, the obelisk “includes a tasseled funereal drape over the apex, four shells at the top of the plinth, and a flag meant to represent either the Second or Third National Flag of the Confederate States of America.” The dates of the Civil War are inscribed on the north and south-facing panels, and “C.S.A.” is etched onto the east and west sides.

While the obelisk itself may not appear overtly racist at first look, however, its inscription reveals the monument’s true intention. Pro-slavery Confederates, it asserts, “were of a covenant keeping race who held fast to the faith as it was given by the fathers of the Republic.”

Almost anticipating the South’s future association with treason and slavery, the monument continues: “How well they kept the faith is faintly written in the records of the armies and the history of the times. We who knew them testify that as their courage was without a precedent their fortitude has been without a parallel. May their prosperity be worthy.”[xi]

Just two years after the Civil War, U.S. General John Pope wrote a letter to Ulysses Grant, expressing his concerns about how the War—and the causes of the Confederacy—would be remembered in history. “The rebellion was the result of a tremendous conspiracy, to destroy the nation’s life. It sought to obliterate civil liberty throughout the South – to reduce the Southern white laborer to the condition of the free negro, and the free negro to slavery; to re-open the African slave trade, and to establish over the South the despotism of an oligarchy founded alone on slavery…How cruel and remorseless its career was,” he lamented, “how little it respected individual rights and the common laws of humanity when they stood in the way of its remorseless schemes.”[xii]

In closing, we are urgently requesting – in the name of what is right, and good, and moral about this city and county – that you consider removing this painful reminder of the worst of our history. Take down this daily remembrance of violence, white supremacy, and hate. Take down this horrific statue – a statue that lauds the ownership of human beings; a statue that rests upon a land soaked with the sweat of unfree labor, and stained by the blood of untold thousands. Take down this monument to racist cruelty and division, and perhaps as a community we may finally begin to come together and heal.