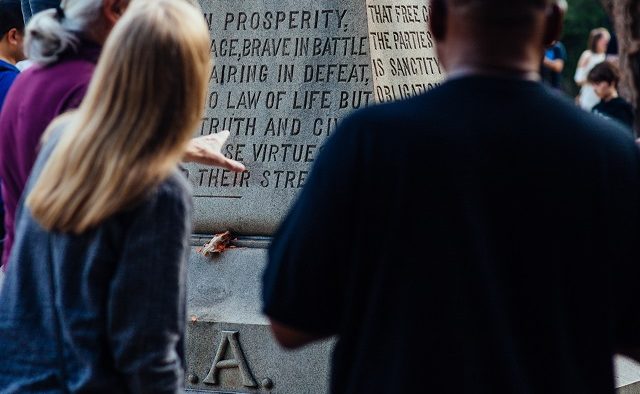 After the Stand With Charlottesville candlelight vigil on August 13. 2017, in Decatur, Ga., attendees gather to discuss the controversial "Lost Cause" monument in Decatur Square. File Photo
Share 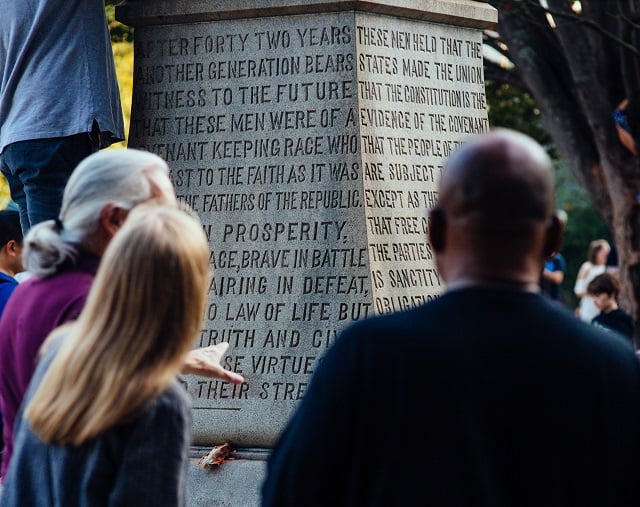 After the Stand With Charlottesville candlelight vigil on August 13. 2017, in Decatur, Ga., attendees gather to discuss the controversial “Lost Cause” monument in Decatur Square.

Note: This letter was originally addressed to the DeKalb county Commission.

I write to you as an Assistant Professor of History at Georgia State University, as a resident of Decatur, and as the mother of two young boys to demand the removal of the Confederate memorial in the Decatur Square.

A monument is a celebration, an explicit and public articulation of a community’s values at the time it was created. It is intended to sustain or revive a certain set of values.

In contrast, we study history to increase our ability to confront the most pressing questions of the world in which we live. History does not give us answers to these questions, but rather provides perspective on them. In studying the past, we do not gloss over the parts we don’t like; rather, we undertake rigorous research on all aspects of various times and places to learn about the consequences of the actions and decisions of our ancestors.

On the day that the Dekalb “Monument of the Confederate Dead” was erected, the ambition was to celebrate a viewpoint that today our community does not wish to celebrate; a viewpoint that believed in a right to own human beings as property and in the right to use violence to maintain white supremacy. Hooper Alexander, whose words are inscribed at the base of the monument, claimed that the city would fail to be active participants in “that heritage” if “we are here content to write our testimony upon stone, and grave it not upon the hearts of our children.” The monument was a reminder to engrave racism on the hearts of the children.

According to newspaper reports at the time, the obelisk was paid for by donations from 1,000 individuals in Dekalb County; many of them were school children. And, according to Alexander, it was the children of Decatur who were the intended audience.

This is obviously not a message that we would like to pass on to our children. Should we let this monument, a celebration of the legal ownership of human beings as property—“that heritage”— continue to announce that the behavior that we witnessed in Charlottesville last weekend is acceptable to us in Decatur today? That it should be celebrated?

Our children play in the square; and we cannot continue to send them the message of hate promoted in 1908. More than a century later, haven’t we moved to a far better understanding of how we can build a successful community for all in Decatur?

By removing this monument, we are not erasing history; we are publicly condemning the celebration of slavery and racism and the terror tactics used to maintain a system of white supremacy long after Emancipation. These were the reasons why it was erected. These motives should never have had a place in our society and the urgency of our contemporary moment demands that we act immediately.