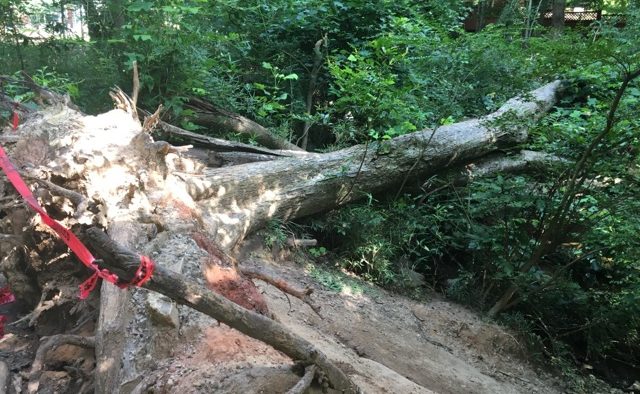 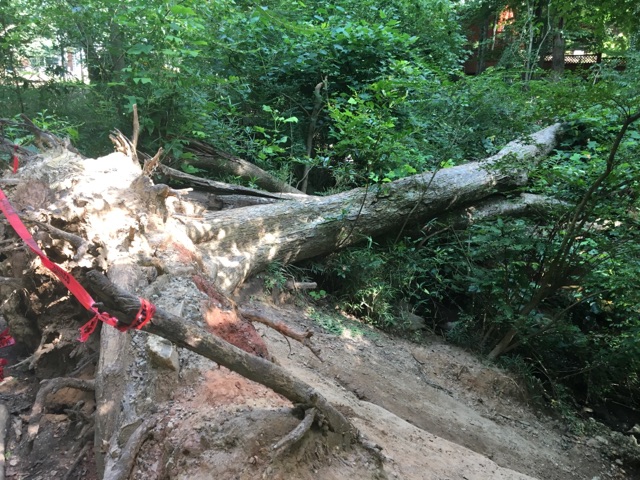 As a parent of a first grade daughter at Westchester Elementary School, I was concerned when I received a message from the school yesterday, indicating that unsafe trees along Hidden Cove Trail behind the school led to closure of the trail.

As part of City of Decatur’s ongoing work with the Urban Forest Management Plan to evaluate the health of our city’s trees and tag high risk trees for removal, several trees along Hidden Cove Trail were recently marked with red tape and tagged as high risk. After an open letter to Decaturish was published Aug. 1, City Schools of Decatur shut down a portion of Hidden Cove Trail until the high risk trees are removed.

Pedestrian and cyclist traffic along the trail has been rerouted to dangerous Scott Boulevard and to Westchester Drive, which has no sidewalk on the school side of the street. Though actions taken to tag the trees and close Hidden Cove Trail were intended to keep families accessing Westchester Elementary safe, the unintended effect has pushed young students out onto streets ill-equipped to handle additional foot traffic safely. Additionally, neighborhood residents who use Hidden Cove Trail are inconvenienced by the closure.

City of Decatur and City Schools of Decatur must work together quickly to address the trees and reopen the trail. These recent events highlight the importance of effective collaboration between the city and school district leaders. The situation also lends more urgency to needed cyclist and pedestrian safety upgrades on the Scott Boulevard corridor.

Ultimately, taming Scott Boulevard to the benefit of its many users and surrounding neighbors is dependent on both road modifications and safe, enjoyable alternative routes of travel. Long-term success will require strong, ongoing, and productive collaboration between the city, our schools, and neighborhood stakeholders.

Editor’s note: After the original letter published City Manager Peggy Merriss provided additional information concerning the trees that had fallen on the trail. Here’s what she had to say:

The city’s arborist Kay Evanovich, inspected the area on City Schools of Decatur property a number of months ago and there was one tree that had fallen and another one was leaning. The tree had fallen across the creek but not into the creek causing an obstruction. Our practice in natural areas are when trees fall, we let nature take its course. Kay noted the area for a future re-inspection. Last week she reinspected the trees and noted that the fallen tree had disintegrated and was blocking the flow of the creek and that an additional tree had increased its leaning angle. She recommended both be removed.

Kay let the City Schools of Decatur know late afternoon on Wednesday, July 26.  This was just several days before school was scheduled to start and I am sure that the maintenance staff was very busy making sure that the schools were ready for students. Kay reminded CSD officials … of the trees’ condition. It is my understanding they have taken steps to secure the area and the trees will be removed in the near future.