Decatur Welcoming Week will feature ‘I Am Decatur’ photo series

Decatur Welcoming Week will feature ‘I Am Decatur’ photo series The city of Decatur will be celebrating “Welcoming Week” starting on Sept. 15 and it will feature an art installation by photographer Beate Sass.

Her “I Am Decatur” photo project chronicles the lives of everyday Decatur residents and employees. Sass came up with the idea following the presidential election last November.

“I was just so disturbed during the election and the campaigning last year and how divisive the country had become and I came up with the idea of really sharing the diversity in our city and wanting to highlight people’s stories,” she said.

The photo project was sponsored by the Decatur Education Foundation and the Decatur Arts Alliance.

Sass has allowed Decaturish to reprint a few of her photos and essays. For the full gallery, click here.

Wiley Roberson was born on Atlanta Avenue in Decatur in 1934. When urban renewal and white flight occurred it provided the African American community the chance to expand and live in other areas of town. “I have had a wonderful life in Decatur, but I’ve seen it change dramatically.” Wiley Roberson’s parents traveled from Walton County, Georgia to Decatur in 1921. They settled down in the African American community of Beacon Hill, where they raised 11 children. “I was born on Atlanta Avenue in 1934. The Beacon Hill community was our village. We had everything that we needed, a doctor’s office, grocery stores, a movie theater, restaurants, and a funeral home where the courthouse is sitting now. We thrived.”

In the mid 1960s, urban renewal and white flight occurred. Wiley states that these changes proved to be positive for the people living in his community. “We had a chance to get out of this village and expand and go live in other areas which wasn’t possible back then because the railroad track was our dividing line. The white people started moving out and blacks started buying over there. I have had a wonderful life in Decatur but I’ve seen it change dramatically.”

Wiley is a talented singer and is often asked to sing gospel songs at funerals. He also loves to cook. Wiley bakes cakes from scratch and he sells them during the holidays. Wiley’s secret for baking a successful cake? “Take your time, have everything at room temperature, and have a good attitude.”

When Robert Griffin and Andrew Currie were invited by friends to attend a festival in Oakhurst, they were struck with the feeling that Decatur was where they belonged. “There was this incredible feeling of welcomed diversity, old and young, black and white, gay and straight, and everything in between.” 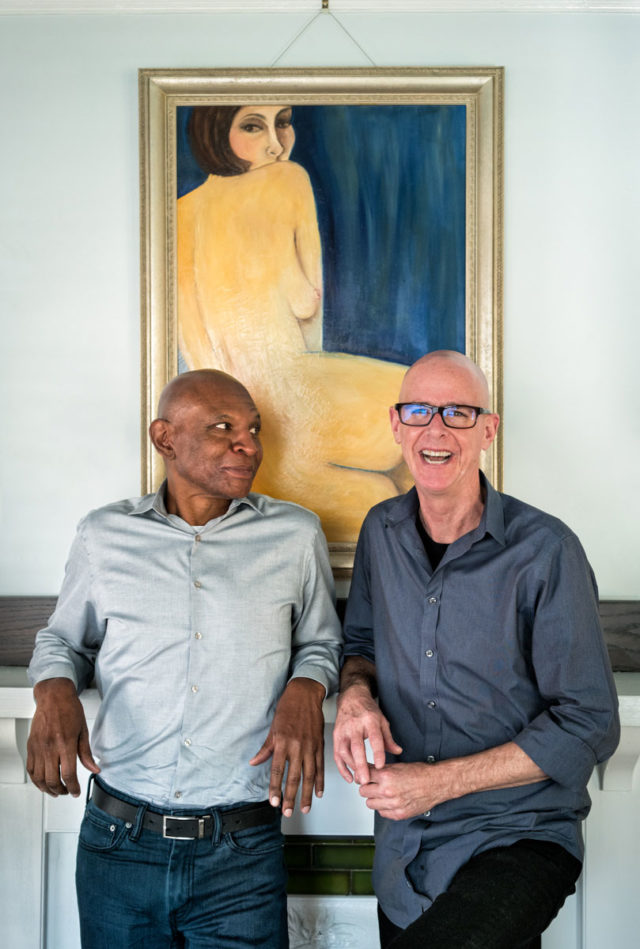 In 2003, Robert Griffin and his partner, Andrew Currie, were invited by friends to attend a festival in Oakhurst, a neighborhood in Decatur. Although they lived in Midtown, only 6 miles away, they had never visited this area of town. That day changed the trajectory of their lives. Andrew recalls, “Honestly, I will never forget this. It was a beautiful Sunday afternoon with great music. We looked around and there was this incredible feeling of welcomed diversity, old and young, black and white, gay and straight, and everything in between. It felt like we belonged.”

Not long after, Andrew and Robert drove by a house in Oakhurst that caught Andrew’s attention. Robert was resistant. “I was like, no! The property was overgrown, the windows broken, and the porch was terrible. It was just awful.” Andrew insisted it had good bones and structure. They bought the house, and it is where they have resided for the last 14 years.

Although Robert and Andrew have embraced living in Decatur, they have witnessed a shift in the diversity which leaves them concerned. Robert points out, “The changes since we have moved here have been dramatic. We left Midtown because it was becoming gentrified. It has followed us here to Decatur.” Andrew adds, “We are a victim of our own successes. Decatur was smart enough to invest in all the right things. The schools are a magnet, and that is a great thing. As a result, we are bringing a lot of people in, but the mix is getting off. I have grown to love the inclusiveness, the range of people and the attitudes. It can’t be beat. But, I fear that Decatur may lose a bit of its soul if we’re not careful.”

As Decatur Fire Department Support Service Captain, Ninetta Violante fights fires and stereotypes. “When I started it was difficult. I had to prove myself because of my gender. Today our department is very open and accepting. I think we’re ahead of the game compared to what’s occurring nationally and internationally.” Captain Ninetta Violante joined the Decatur Fire Department in 2001. She arrived at this post by a circuitous route. Because of a strong desire to help others she had sought to work on the AIDS campaign in California, but couldn’t land a job, so traveled to Africa and worked as a volunteer. From there she came to Atlanta to enroll in the Master’s Program in Public Health at Emory. To shore up her finances she enrolled with a temp agency that referred her to a job in the Decatur City Hall. While there the staff questioned Ninetta about her aspirations. Then they asked, “Would you like to become a firefighter?”

“I had gone through boot camp, I had been a personal trainer, and I am an athlete. I have always wanted to save people. And here they were, ‘you should be a firefighter!’ I had never considered that. Then I got really excited. I was so scared because I thought it was a really good fit and thought, what if I don’t get it? But here I am.”

“When I started it was difficult because I was 5’2”, 125 pounds, and female. I was also unsure about letting them know about my sexual preference. I’ve always been okay in male-dominated scenarios, whether it was the military or just growing up participating in athletics. Often I was the only female on a team. But at the fire department, I had to prove myself. It was probably the first time where I wasn’t accepted by some because of my gender. It was hard. It took about three years before I gained the trust and respect of all the firefighters. Today, our department is very open and accepting. If I didn’t work for the City of Decatur, I don’t know if I would work for a different department. I think we’re ahead of the game compared to what’s occurring nationally and internationally.”

Stay-at-home dad Huckleberry Starnes and his family moved to Decatur three years ago. “The reason we came was for the schools, and we haven’t been disappointed. One of the things we like so much is the diversity, but it is changing. We’re conflicted about it. I think it will probably level out at some point. It’ll be interesting to see how that works.” Huckleberry Starnes has pursued many creative endeavors in his lifetime. He was a sculptor, furniture maker, product designer, and even studied toy design. His creative inclinations and gifts prepared him handsomely for becoming a stay-at-home dad. Huckleberry had also grown up assisting his mother in running a Montessori-type school and enjoyed being around kids. “I love to play, have fun, and get down on the floor. The best part for me is being able to spend the time with my kids. Hands down. Being able to support my wife, Hester, who works tirelessly and travels extensively is really rewarding as well.”

Huckleberry and his family are known for erecting the most spectacular light display, inflatables, and props during all the holidays. “My kids have the same level of amazement and joy that I do. We really enjoy doing it together and love teasing Mommy about how ridiculous it’s going to get.”

Huckleberry and his family moved from the west side of Atlanta to Decatur three years ago. “The reason we came was for the schools, and we haven’t been disappointed. We also love the walkability and that it is a bike-friendly city. One of the things we like so much is the diversity, but it is changing. We’re conflicted about it. We obviously moved to Decatur because the city has great schools and is very safe. But what has come with this is gentrification and a lack of respect for what this neighborhood and city were and where it came from. I think it will probably level out at some point. It’ll be interesting to see how that works.”

Sass’ photos will be displayed during the Welcoming Week Decatur reception on Sept. 15. It kicks off at 5 p.m. on the bandstand in the Decatur Square.

“During this annual week of events, communities are encouraged to bring together immigrants, refugees, and native-born neighbors to raise awareness of the benefits of welcoming everyone,” the announcement from the city says.

Here is the full list of events, provided by the city:

This year Decatur will host a Welcoming Week kickoff event on Friday, Sept. 15, at the community bandstand on the square. Bring your family and friends as we celebrate what it means to be a member of the Decatur community. There will be artists, refreshments and speakers from the community sharing their stories of immigration and what being a Decatur resident means to them, and the unveiling of the I Am Decatur photo project. The event is free and open to all who wish to join.

*A public art installation based on Decatur photographer, Beate Sass’ I Am Decatur photo project will be on view beginning Sept. 15 at the community bandstand on the square. You can also view the exhibit online at IamDecatur.com. Subscribe to receive new stories as they are published.

The Atlanta Panyarders Caribbean Arts and Cultural group invites the community to the bandstand on Friday, Sept. 22, to embark on a journey through Caribbean culture. The program will include steelpan music, a display of elaborate festival costumes and interactions with the audience.

We Are Decatur: Building Community through Conversations
Sunday, Sept. 24• 5-7:30 p.m.

The Decatur community is welcome to participate in community conversations around Sunday supper on Sept. 24. This event will feature the I Am Decatur photo project.

Read the personal stories of fellow community members, and then join in on a broad community conversation across differences. Participants will be supported by table facilitators and invited to share experiences and perspectives on various topics. The event will take place at Beacon Municipal Center, Ebster Gym, 105 Electric Ave., and is free to the community. Reservations are required as space is limited. RSVP at goo.gl/tPa55D(use password WeAreDecatur17).