Discussion held in Decatur Square about future of Confederate monument

Discussion held in Decatur Square about future of Confederate monument 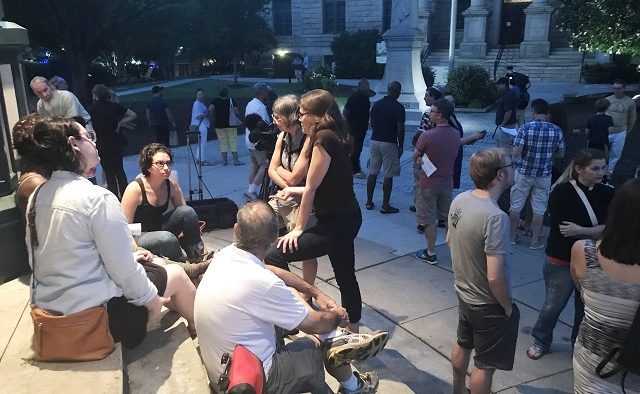 "I think it's productive," attendee Danny Shumpert said of the meeting. "Anytime people can sit down and have a civil discourse — that's what America's about." Photo by Duo-Wei Yang
Share 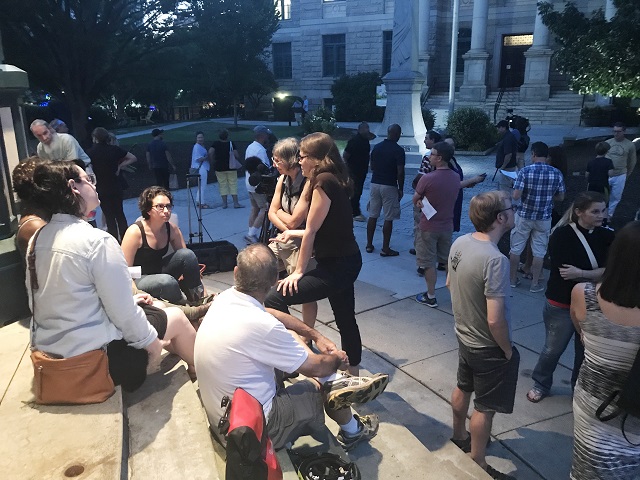 “I think it’s productive,” attendee Danny Shumpert said of the meeting. “Anytime people can sit down and have a civil discourse — that’s what America’s about.” Photo by Duo-Wei Yang

In response to white supremacist violence in Charlottesville, people gathered in front of the DeKalb courthouse to discuss Decatur’s own Confederate monument Saturday evening.

Hannah Hill, who created the discussion event on Facebook, began by setting the ground rules for the meeting.

“We know that there’s going to be different opinions,” she said. “Feelings of discomfort will let us grow. It’s about listening to both sides and coming to a place of understanding.”

Georgia State University history student and speaker Sara Patenaude said how unpleasantly surprised she was when she saw the Decatur Confederate monument for the first time.

Hill then invited attendees to introduce themselves.

Michael Hughes, an immigrant and Decatur resident for 40 years, says that Confederate monuments like Decatur’s has “always struck me as really, really weird.”

Resident Mike Warren said how “striking” the monument was to him.

“It’s smack dab in front of the courthouse,” he said. “When this went up, the courthouse was very much the seat of justice in this town. And here we have a monument telling black people that that this courthouse is not their place.”

Stan Cawan, previously involved in helping to change the Georgia State flag, believes that changes to this monument could be made.

“If people get together and get behind her legislators to sponsor the legislation to change the Georgia law, then it will allow the City of Decatur and DeKalb County to do what I think they already want to do,” he said. “But their hands are tied right now by state law.”

Following introductions, Hill invited attendees to split themselves into small groups for civil conversations on the topic.

Although there were varied opinions on what to do with the monument, attendees were generally in favor of changing its current state.

Ryan Brian believes that the monument should be moved to a museum.

“What’s inscribed on it presents a very inaccurate record of history,” he said. “If you weren’t from this country or even if you were from this country and hadn’t had much education, when you [read] that inscription, you would think that the Civil War was all about a contract dispute. You don’t see the words slavery anywhere there.”

Elliott Robinson thinks that contextualizing the monument or adding to it are great solutions.

“The biggest thing is that it’s always been ‘it’s only one side of the conversation’,” he said. “’It’s heartening that people are willing to come and have a discussion about it and it’s not just the same kind of discussion of ‘okay, yes it just has to come down’ but ‘what do we need to do?’”

After small-group discussions, Hill brought attendees back together to reflect and share ideas with the entire crowd.

As current Georgia state law makes taking down Confederate monument is practically impossible, Gina Livingston suggested inviting artists to respond now with several pieces, such as a video production or sound installation. “If we just tear it down and put we something back up, does our conversation stop? The answer is probably yes. So how do we take that and move forward? Art is a really good way to ask those questions and keep it running.”

In the middle of her speech, a passerby interrupted, outraged by what she was hearing.

“You don’t have any business taking down anything you didn’t pay for or put up,” the passerby said. “It’s a part of history. I know my history. I just think you don’t because you’re so anti-America.”

Listen: Audio of the outburst during the discussion about the Confederate monument.

Attendee Emma Crumpton shot back, talking over her.

“I love America and I would love it to be an accepting wonderful place where all people can come together because that is what America is about,” she said to applause. “It’s about coming together.”

To conclude the meeting, Patenaude gave her reflection of the evening.

“I feel really encouraged,” she said. “Not just encouraged of the possibility of moving this monument, but encouraged about what this says about our community in Decatur and who we are and how we come together.”