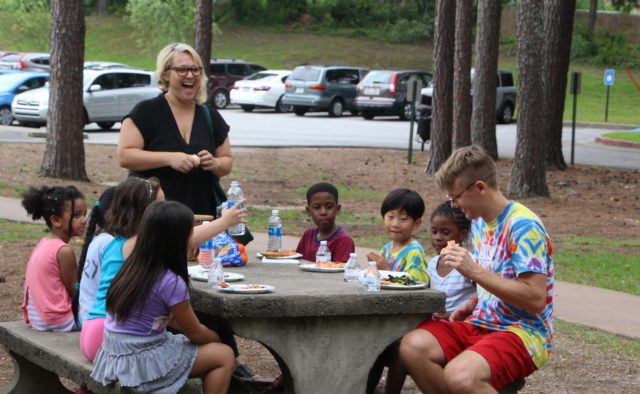 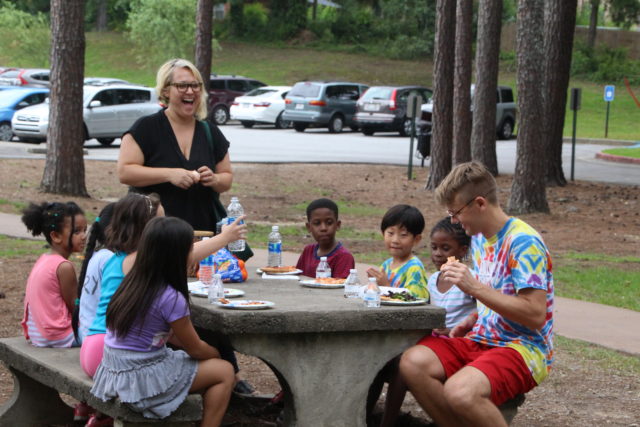 If you were to walk into any classroom in the DeKalb County school located next to Medlock Park, you’d see the excited faces of students who are Iranian, African, Syrian and more. The charter school is made up of more than 400 students, both refugees and Americans.

Since it was founded in 2002, ICS has almost quadrupled in its enrollment and now serves kindergarten through 5th grade students. According to its website, the students at ICS “represent an economic mix seldom seen in U.S. public schools,” with 49 percent being child refugees or immigrants and 68 percent eligible for free or reduced lunch.

Although they’re young, the students realize how diverse their school is – and they love it. 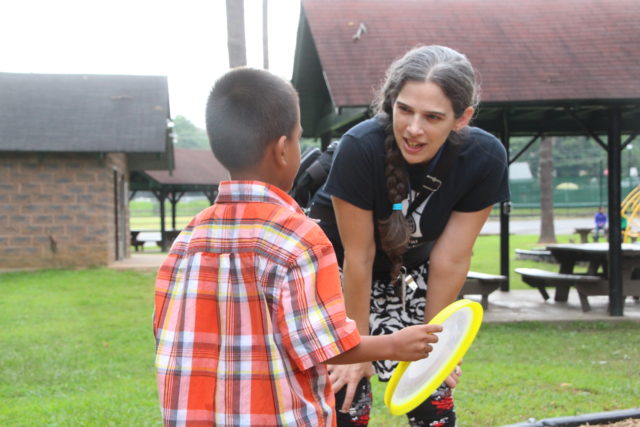 One of the ICS ESOL teachers catches up with a student about their summer break. Many students at ICS speak English as their second language. Photo by Ellie Ritter

“ICS is my favorite place because there are so many different types of people and cultures being blended,” Parsa, a rising 6th grader from Iran, said. “All of my friends are from all sorts of different places, and it makes us all unique, but we’re still able to become friends.”

Parsa will leave ICS this year to start middle school, but he’s just as close as ever to his ICS family. One of his favorite memories, he said, was the school’s “U.N. Day,” where they each dressed up to represent their culture and shared their culture with their peers.

“It was really cool to get to see all of the different places my friends were from,” he said. “I didn’t realize before then how many different places I know people from. I got to try their food, which was one of the best parts, but I just liked hearing all of their stories.”

“I like things like U.N. day and field day and all the fun activities we get to have because we learn all about each other, even things we had no idea about,” she said. “And my best friends are from other countries across the world so I get to see more of their culture than anyone else I know.”

It’s not just students who love the school, though. The faculty all share an eagerness and passion for learning, teaching and interacting with their students. On Aug. 2, the entire ICS staff took a school bus to Clarkston, where many of their students live, to see their neighborhoods and meet up with the kids for food and games.

According to Beth White, a 4th grade teacher also in charge of community outreach, the faculty outing allowed the teachers, students and even parents to achieve an important connection.

“When we as teachers know where a student is coming from, both physically in terms of where they live and mentally, we are more prepared to help them, but we also can understand them as people better,” White said.

On the morning of the trip, the staff boarded a school bus and began driving to Clarkston with White pointing out certain apartment complexes and neighborhoods along the way.

“Over here on the left, we’ll be passing by Park Point and Jackson Square apartments,” White called out across the bus before naming the seven or so families who lived there. She continued to point out dozens of other apartments, always listing the names of students who called those places their homes.

“We have teachers that intentionally create classroom cultures of deep connections and celebrated diversity,” he said. “The community we have built is what sets ICS apart from any other school.” 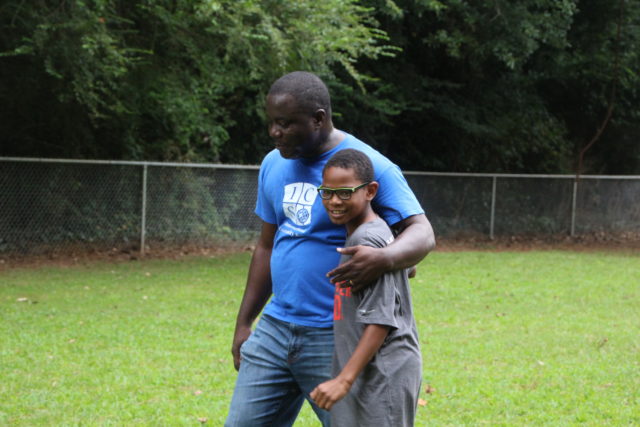 An ICS teacher and student hug after a friendly soccer match between the staff and kids. Photo by Ellie Ritter

After driving through dozens of students’ neighborhoods, the bus eventually dropped the staff off at Milam Park, where plenty of students met them to play soccer and catch up after summer break.

Soccer, among many other sports offered, is a point of pride for ICS. Many of their students play soccer for the school team and other local club teams, including ICS graduate Lagos Kunga, who now plays for Atlanta United.

In fact, soccer is what eventually draws many parents closer to the school community. Nicole, a longtime ICS parent, became involved after giving students rides to and from soccer practice. Now, she says she’s “practically family with dozens of other kids.”

“I’ve found that ICS, and volunteering with ICS, is a sort of chaotic happy place for me,” she said. “The diverse families make it so eye-opening, and you get to know these really amazing children.”

The teachers said they want to do anything they can to help their diverse school community thrive.

“We just want to provide hope for the students,” White said. “Especially now, we want to give them brighter outlooks and a safe place to be. We want this to be a place they love to go.”