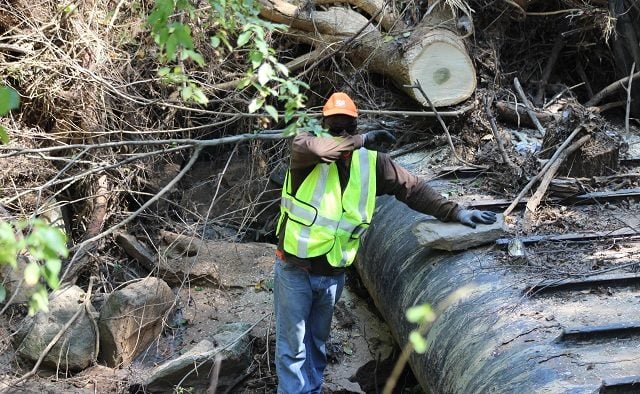 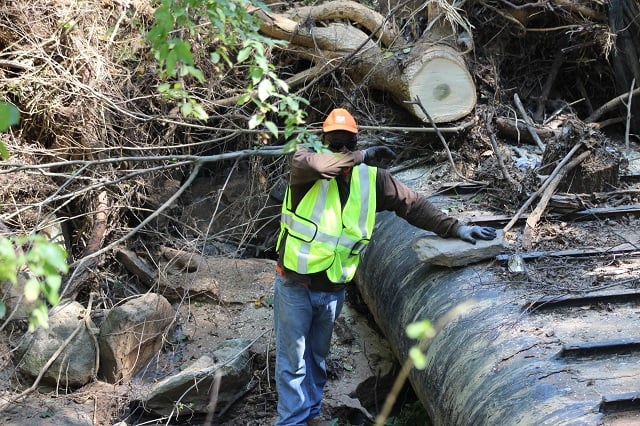 A reported sewer spill at Snapfinger Creek in Lithonia is worse than DeKalb County officials thought.

The spill occurred north of the Snapfinger Wastewater Treatment Plant. It was discovered on Aug. 23 near Eagle’s Beek Circle, the county says.

According to the county, “DeKalb County and emergency contractor crews working overnight to contain a major sewer spill discovered more extensive damage to the [54 inch] creek crossing than initially observed yesterday morning [Aug. 24]. High bacteria counts in the Snapfinger Creek area alerted inspectors to the spill, which was caused by a 16-inch-diameter tree growing out of the concrete junction box where two pipes converge. The location of the pipe, along with the extent of the deterioration, is making containment difficult.”

There are more than 40 people and a dozen pieces of heavy machinery working on the site, the county says. They plan to install a temporary pipe to bypass the river crossing and install a permanent fix once the spill is contained.

On Aug. 17, the county reported a spill  in the tributary that feeds into Nancy Creek near Mill Creek Road in Brookhaven. That spill has been contained.

“The two recent major spills clearly indicate that DeKalb County’s inspection of its sewer system has been deficient,” DeKalb CEO Michael Thurmond said in a press release. “The regular inspection and maintenance of our sewer infrastructure is now a top priority.”

Thurmond is touring the site today and said he has directed Department of Watershed Management staff to do emergency inspections of all creek crossings and inspect all pipes along Snapfinger Creek.

DWM also has been instructed to implement a plan of regular inspections of sewer lines, the press release says.

The county urges residents to avoid the area of the spill and keep their pets away from it, too.