There’s still more work to be done, but four days after a tropical storm blew through Atlanta, the city and county say they are making progress.

The city published this updated list of road closures. There’s less red on it than there was yesterday … 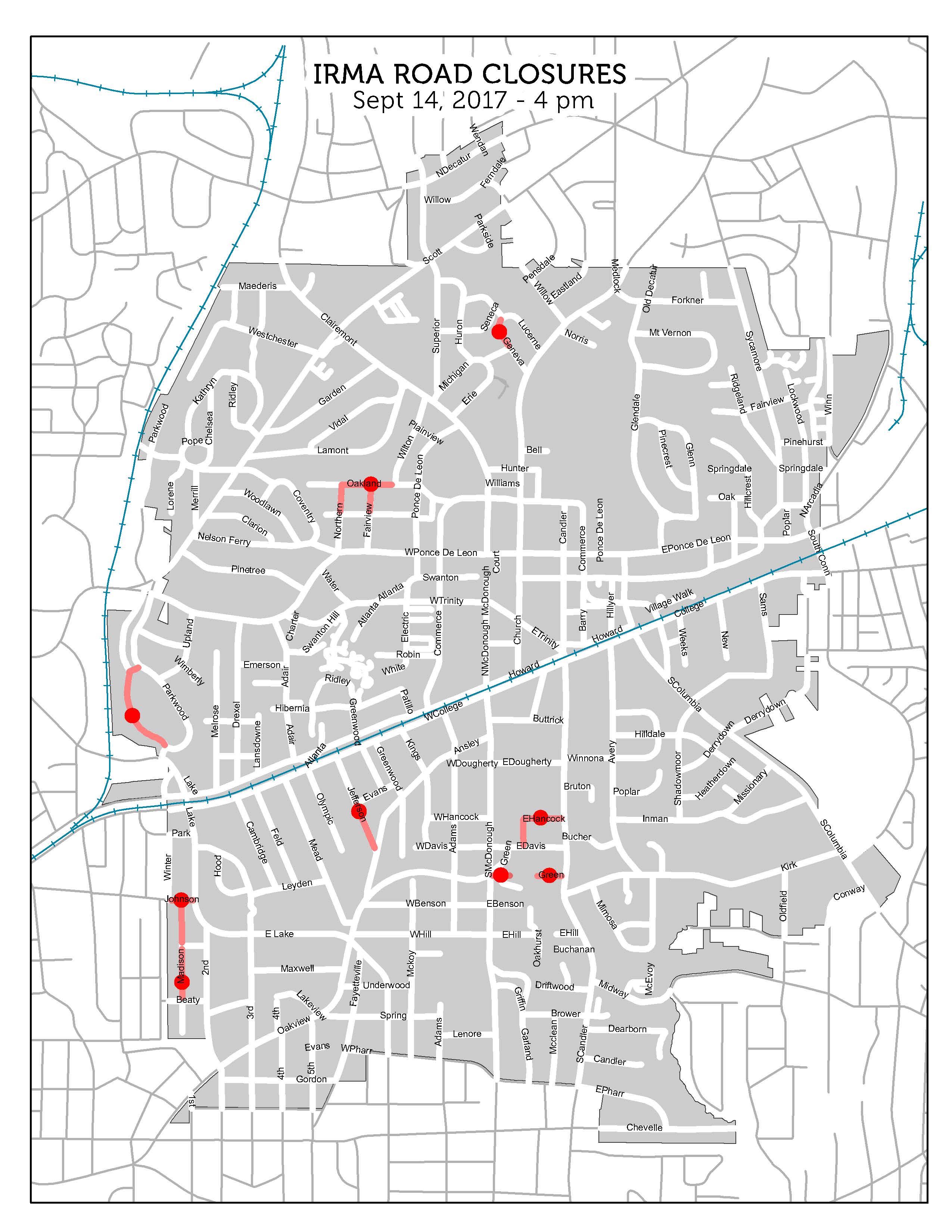 An email sent by City Commissioner Brian Smith said storm cleanup could still take several more weeks. The city has resolved most of the 110 reported tree and power issues. As of Thursday afternoon, only 10 issues remain. All City Schools of Decatur school have power, according to Superintendent David Dude.

Here is the full email:

The City started today with 73 out of Monday’s 110 reported tree/power issues resolved, leaving us with 37 on the list.  By Thursday at 3:30 p.m., the list of unresolved issues within the City is down to 10.  … All of the CSD schools have power.

All of the large power outages have been resolved.  Unfortunately there are spot and smaller scale areas that are still without power.  The Oakland/Fairview and Oldfield/McKinnon neighbors are the main smaller areas that are still without power and the City is working with Georgia Power to try get those addressed ASAP.  At the intersection of Lucerne/Geneva there is a tree and pole down but the wires never lost power.  In order to repair the pole and remove the tree, the power will have to be shut off for some period of time so regretfully this will have to be done in order to get the repair completed.

Tomorrow (Friday) the City will provide specific information on collecting yard debris and sanitation collection.  We expect that debris collection will take several weeks, if not much longer.

The Decatur Police Department also had reasons to celebrate.

The county still has numerous roads closed. Since Monday, the county has removed more than 130 tons of debris, including about 180 trees, and has reopened 75 roads.

“As of 3 p.m. Thursday, DeKalb had 20 roads closed and 112 trees to remove,” a press release form the county says. “Sixty-eight of those trees are entangled in wires, which for the safety of county crews, must be confirmed by Georgia Power to be de-energized before they can be removed.”

DECATUR, Ga. – DeKalb crews are working around the clock to remove trees and reopen roadways throughout the county. Since Monday afternoon, more than 130 tons of debris, including 180 trees, have been cleared and more than 75 roads reopened.

“DeKalb bore the brunt of Irma’s wrath in the metro area, and we saw a lot of trees fall across power lines and roads,” said DeKalb CEO Michael Thurmond. “We have been able to make a lot of progress clearing the roads, but substantial work remains. We are working diligently alongside Georgia Power to return the county back to normal.”

As of 3 p.m. Thursday, DeKalb had 20 roads closed and 112 trees to remove. Sixty-eight of those trees are entangled in wires, which for the safety of county crews, must be confirmed by Georgia Power to be de-energized before they can be removed.

For updated information about road closures, safety tips, phone numbers and other pertinent information on Irma recovery, go to www.dekalbcountyga.gov/irma.