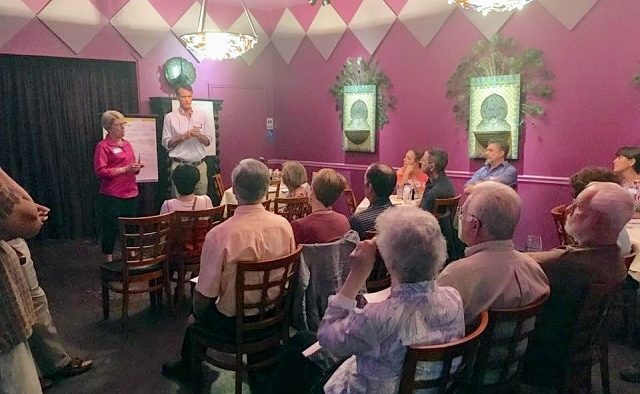 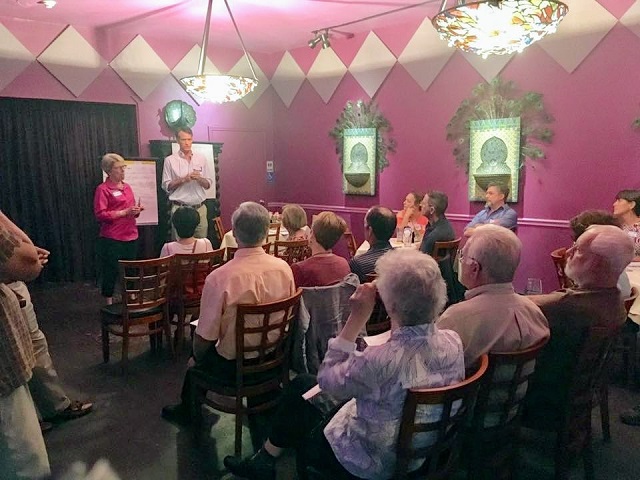 A group of business owners along West Ponce de Leon Avenue in Decatur held its first official meeting on Sept. 21 at Café Lily to discuss their concerns about the area’s future.

The area of town under discussion spans from the Commerce Drive CVS down to the Post Office. The group discussed how to attract the right mix of businesses to the West Ponce corridor while maintaining locally-owned businesses. Mixed-use developments have been cropping up all over town, and with them often come high rent prices that drive out the smaller shops and restaurants.

Nearly two dozen attendees, ranging in age from mid-20’s to senior citizens, showed up to participate in the conversation and voice their concerns.

The meeting was conducted by Dan Reuter, a fellow with the American Institute of Certified Planners, owner of Reuter Strategy, and DeKalb County Commissioner Kathie Gannon. After the meeting, Gannon called to clarify she was there in her capacity as a resident, not as a commissioner.

Many attendees said that the West Ponce area of Decatur needs a specific identity and “brand.”

Some attendees had a disdain for big developers, whom they felt are squeezing out small, local, long-standing businesses in favor of more recognizable, national chains.

Anthony Pitillo, Chef/Owner of Café Lily, pointed to the Wal-Mart at the intersection of North Decatur and Scott as an example of a quickly-developing area filled primarily with big-box retailers.

One possible solution? Some local business owners were interested in exploring the creation of a private equity group to purchase available West Ponce real estate and develop it themselves, free from the influence of large developers.

One common theme throughout the evening was a focus on how to get shoppers and restaurant patrons to branch outside the Decatur Square and into the West Ponce district, which boasts 17 restaurants in its small stretch of less than a half-mile.

Several attendees noted that the festivals and events that take place on the square often don’t include or benefit the shops and restaurants just down the street.

Jason Shadix, Founder of Found Co. Decatur, a shop of collected objects and apothecary for the home and body, said, “It’s great that you get [patrons] to the square, but there’s a lot off the square, too.”

Reuter chimed in, “We give credit to Decatur, but we still think there’s room for improvement.”

Commissioner Gannon and asked the group to consider what types of initiatives might make W Ponce more appealing and meaningful, and a myriad of ideas were proposed, including increased involvement in existing festivals on the square, better marketing of neighborhood perks such as free street parking after 6 p.m., and enhanced street lighting to create a friendlier after-hours environment.

While the questions raised were plentiful and varied, the feasible solutions – and the identity of the W Ponce area – will take more time to pinpoint.

For now, the West Ponce Decatur Dialogue group intends to continue meeting and creating action steps to enhance the area. The group is holding another meeting on Monday, Sept. 25, at 6:30 p.m. The meeting will cover the same topics for people who couldn’t make the first one and is open to the public. It will be held at the Ebster Recreation Center, located at 105 Electric Ave., Decatur, GA.

Michael Minga, co-owner of Vivid Boutique, said, “We want to stay here and help continue to be a desirable place for people to live, work, and play.”

Correction: An earlier version of this story included an incorrect date for the next meeting. This story has been updated with the correct information.