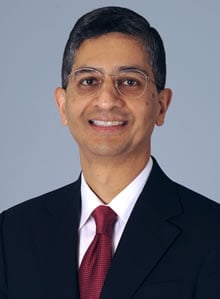 Emory University’s School of Medicine recently named Vikas P. Sukhatme the new dean after a year-long search for someone to fill the position.

While serving as Dean of the School of Medicine, Sukhatme will also function as Chief Academic Officer of Emory Healthcare and as a Woodruff Professor. He starts at Emory on Nov. 1.

“I am deeply honored to have been selected as the Dean of Emory University School of Medicine,” Sukhatme said in a recent press release. “With a stellar leadership team, an extraordinary faculty, an outstanding cadre of staff, trainees and students, and distinguished alumni and supporters, Emory’s future is bright. Now is the time to take on some of the most challenging problems in medicine and biology, and to tackle them through innovative, interdisciplinary approaches.”

Before taking his position at Emory, Sukhatme will finish serving as Chief Academic Officer and Harvard Faculty Dean for Academic Programs at Beth Israel Deaconess Medical Center in Boston and the Victor J. Aresty Professor of Medicine at Harvard Medical School.

As for Sukhatme’s background, he was born in India but grew up in Rome, Italy. He tackled his bachelor’s degree and doctorate at the Massachusetts Institute of Technology, and he earned his MD from Harvard Medical School in their Health Sciences and Technology program in 1979.

“Vikas is a superb researcher with remarkable breadth and sophistication, all in the service of improved human health. He has a deep, discerning intellect and is dedicated to the success of his colleagues and students,” Provost of Harvard and physician Alan Garber said in a recent press release. “Emory is fortunate to have attracted him as dean.”

Speaking to his breadth, Sukhatme also works in the world of entrepreneurs. He co-founded GlobalCures with his wife, Vidula Sukhatme, which is a non-profit organization formed “to conduct clinical trials on promising therapies for cancer not being pursued for lack of profitability.”

“Dr. Sukhatme is a highly recognized and exceptional biomedical scientist, clinician, and teacher,” Emory Healthcare CEO Jonathan S. Lewin said in a recent press release. “I am confident that under his leadership, the medical school will continue its upward trajectory in reputation and impact and will further enhance the Woodruff Health Sciences Center’s place as one of the world’s premier academic health centers.”