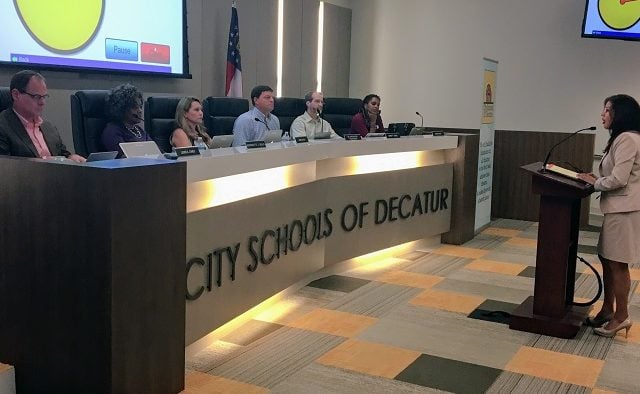 Vernadette Broyles, a lawyer from Georgia Adoption and Family Law Practice out of Norcross, speaks to the City Schools of Decatur Board regarding their policies on transgender students. Photo by Gabriel Owens
Share 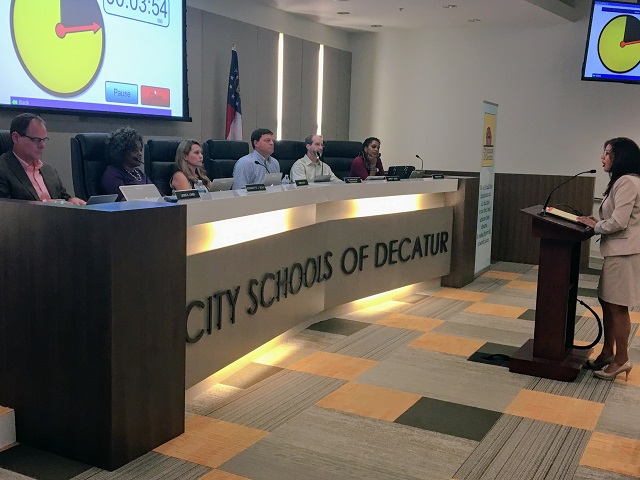 Vernadette Broyles, a lawyer from Georgia Adoption and Family Law Practice out of Norcross, speaks to the City Schools of Decatur Board regarding their policies on transgender students. Photo by Gabriel Owens

During public comments at last night’s Decatur School Board meeting, three people spoke out against the transgender policies being implemented in the district.

The parents’ coalition cited an internal memo to City Schools of Decatur faculty that they claim gives full Title IX rights to students, including the right to use bathrooms, showers and other same gender quarters to those that identify as a gender other than their biological one. It’s unclear how many parents are in the coalition and whether it only consists of the people who spoke during Thursday’s meeting. An attorney who spoke on behalf of the three speakers declined to comment beyond what was said in public comments.

During public comments, three members of the coalition made statements urging the board to consider parents’ rights, scientific studies on transgender students, and claimed the blog post made false equivalence to the civil rights movement of the 1960s.

“We just want to make sure they are including everyone that would be affected by the policy,” CSD parent Mark Major said. “I believe this policy is not considering parents’ rights and students’ rights.”

His wife Gena Major said, “When a transgender walks into a room, no one knows their status. When I walk into a room, everyone knows I’m black. I find the comparison [to the fight for African American Civil Rights] insulting.”

Vernadette Broyles, a lawyer from Georgia Adoption and Family Law Practice out of Norcross, was one of the speakers for the coalition. She declined to confirm if she was representing the Majors in an official capacity when asked by Superintendent Dude.

Broyles cited a Swedish study of transgender individuals and transgender children, saying the study showed a high suicide rate for those that complete the transgender process. She urged the board to take this information under consideration before future official policies regarding the treatment of transgender students are made.

While the specific issue of transgender students did not come up during the rest of the meeting, CSD’s Title IX policy was one the topics of discussion.

Title IX is a federal statute created in the 1970s originally designed to help provide equal rights to women’s athletics in institutions that receive federal funding. In recent years, the scope of the law has been expanded to include more equal rights issues.

Lillie Huddleston, CSD’s equity director, was named the Title IX head and lead investigative officer for reported Title IX violations. Huddleston announced that each school in the district will have a Title IX liaison.

The changes are in response to a Decaturish investigation that uncovered potential issues with CSD’s Title IX compliance. To read the full story, click here.

Superintendent Dude said CSD will make people aware of what the laws says, train staff and teachers, and create a process to file a Title IX complaint.

“We will be ready to process [Title IX issues] quickly to handle any complaint,” he said.

The Decatur School Board was due to receive a report this month about whether the school system is fully complying with federal discrimination law. Superintendent Dude said on Monday, Sept. 25, that he was not aware of any such report. He said, ” It’s not unusual, though, for a request in a meeting to change once there is further discussion with the person requesting. That may be what occurred in this circumstance. … There is no other Title IX update scheduled at this time, although I imagine we will provide periodic updates to the Board.”