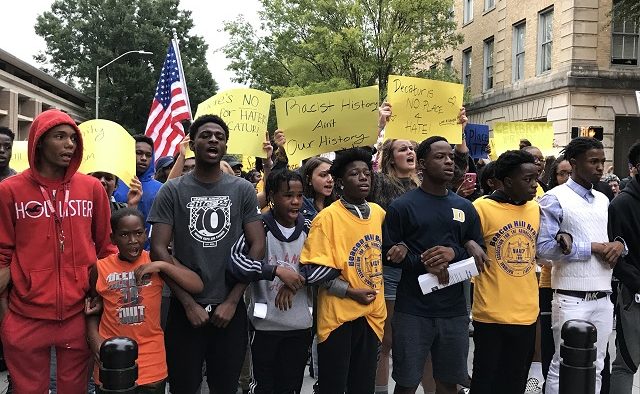 On NAACP leader Miwuli Davis' suggestion, younger protesters headed the march towards the square. "I know you saved your voices for today, for right now, for this moment," he said. Photo by Duo-Wei Yang
Share 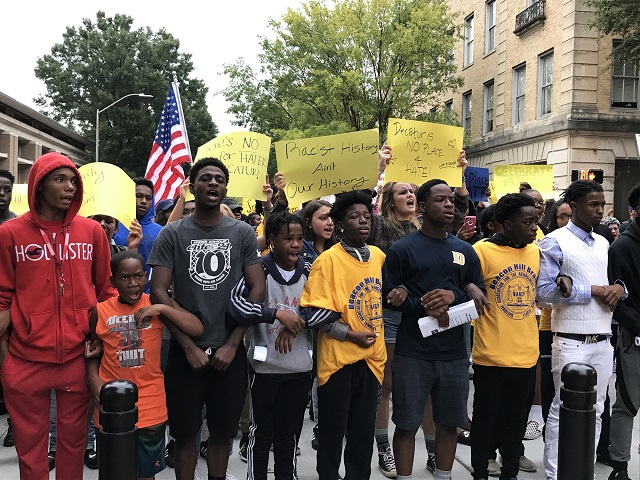 On NAACP leader Mawuli Davis’ suggestion, younger protesters headed the march towards the square. “I know you saved your voices for today, for right now, for this moment,” he said. Photo by Duo-Wei Yang

Condemnation of Decatur’s confederate monument brought people of all races and ages together in last night’s march.

“This is such a wonderful group of young people, older people, everything in between, that are excited to stand here together,” she said.

Patenaude reiterated their unity as she gave the first speech of the evening.

“How can we in Decatur in 2017 still have this monument to white supremacy standing over our square in Decatur? How can we accept this anymore?” she said. “And the answer is: we are here because we will not accept that anymore.”

“It hurts me to my soul to know that in my own city, less than a mile away from my home, there is something that represents such an evil time in history,” he said. “I would like this monument to be replaced by a statue representing the strength of my ancestors.”

Multiple speakers at the rally representing other minority groups came to back the message of the march. Carlos Medina, a member of the Georgia Latino Alliance for Human Rights, was one such representative.

“We don’t want monuments in our community, or living monuments, that promote hate,” Adrian Bernal said, translating for Medina.

Edward Mitchell, a member of the Council on Islamic American relations, argued that the Confederacy would not be forgotten after its symbols would be removed from public spaces.

Following eight speakers, attendees began marching from Beacon Municipal Plaza to the Decatur Square. The youngest protesters lined in the first row linking their arms and leading the crowd, who held their banners and posters high up. Mawuli Davis, with the Beacon Hill NAACP, and Atlanta NAACP vice-president Gerald Griggs led the march.

As the attendees marched, choruses of “show me what democracy looks like” and “take it down” rang in the streets, attracting curious onlookers and more marchers. 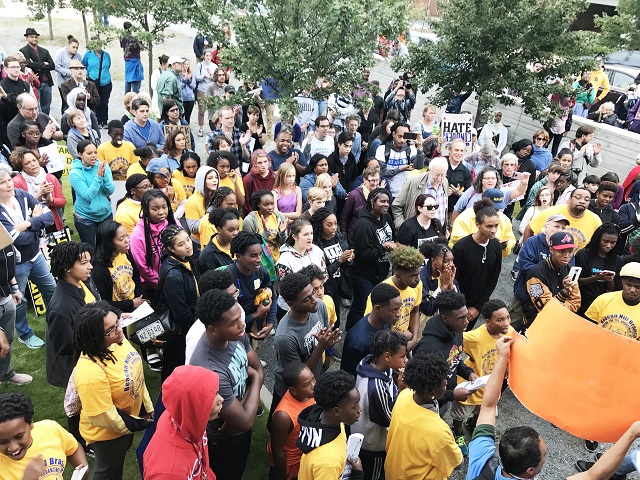 Last night’s rally program was packed with speakers from different advocacy and religious groups. “When neo-Nazis and white supremacists walk openly with their hate, it is certainly time again to rise up and never be silent,” Bethh-Ann Buitekant from the Jewish Voice for Peace said. “Let us not simply be allies, but accomplices.” Photo by Duo-Wei Yang

After marchers arrived at the monument, the evening concluded with another series of speeches.

DeKalb NAACP’s President Teresa Hardy iterated the lack of dignity the “lost cause” monument had.

“Here in 2017, people who respect the dignity of all humankind recognize that there is nothing noble about one race of people keeping another race of people as their slaves,” Hardy said to tumultuous applause.

Minister Jon Spencer believes that some people’s fear of losing their Southern heritage by taking Confederate monuments down is misguided.

“My Southern roots go back many generations on my mother’s side, but I don’t have to be a cheerleader for a cause designed to perpetuate slavery to be a proud Southerner,” he said.

Spencer says that it is time for people in the South to stand and get rid of symbols promoting intimidation and fear.

“We cannot change the past, but we can walk boldly into the future saying no to fear and hatred and yes to justice and truth,” he said. 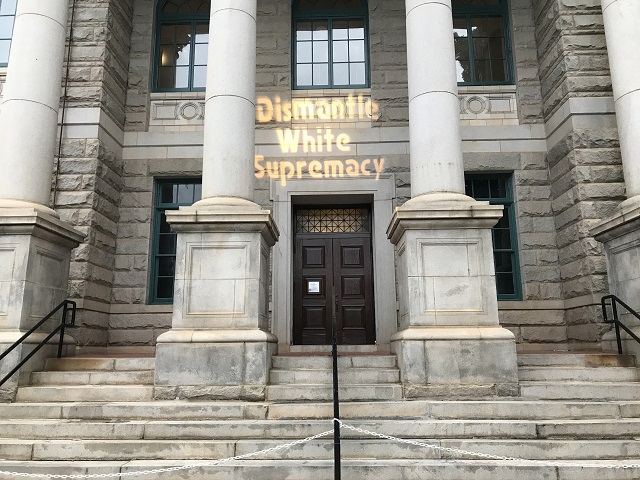 Daniel Hanley from the Metro Atlanta Democratic Socialists of America sets up a light projection onto the courthouse as a backdrop to the Confederate monument. Photo by Duo-Wei Yang