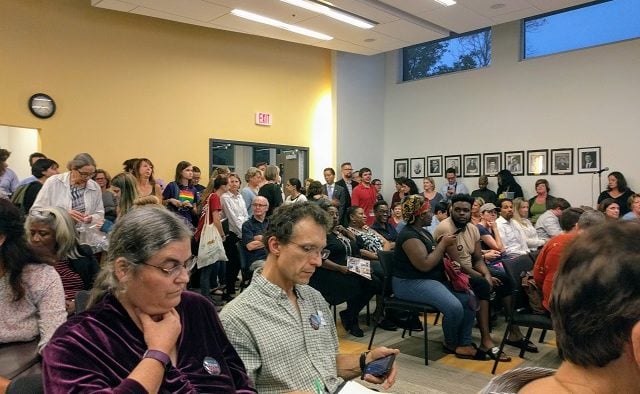 Hundreds of people attended the Oct. 10 Decatur School Board meeting to speak about the school system's policy on transgender students. Photo by Dan Whisenhunt
Share 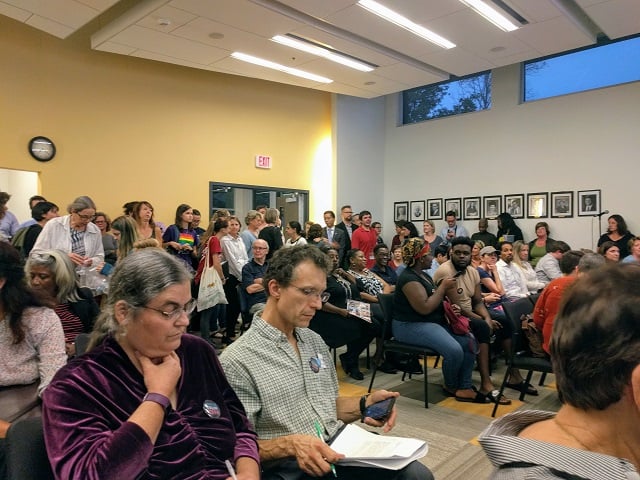 Hundreds of people attended the Oct. 10 Decatur School Board meeting to speak about the school system’s policy on transgender students. Photo by Dan Whisenhunt

Thank you to the school board for holding a meeting the other night seeking community input on City Schools of Decatur’s transgender policy. My husband Michelangelo Grigni and I both spoke on behalf of our son Noah, who transitioned seven years ago as a Decatur High School freshman, and the trans youth who have come after him.

I know the school board is seeking an evidence-based approach to refining its transgender policy, and I want to contribute information toward that.

I want to address some of the tired, discredited tropes invoked by our opponents at the meeting. They may not have won the evening, but they’ll come back again and again, and those unfamiliar with transgender people will remain susceptible to them until we take them on.

1. “My feelings are as good as your science.” No, they aren’t. The two ‘experts’ cited are outliers guided by their own convictions, and not representative of any medical consensus. Quentin van Meter, who “offered himself up as an expert” pediatric endocrinologist, and claimed there is no consensus on how to treat trans youth and whether they’re better off treated, long-term, can hardly act as an expert when he’s not current and consonant with his own professional medical society. Here are the Clinical Practice Guidelines as updated by the Endocrine Society, “dedicated to providing the field of endocrinology with timely, evidence-based recommendations for clinical care and practice,”  in 2017.

Note the standard of care for trans youth:

Clinicians may add gender-affirming hormones after a multidisciplinary team has confirmed the persistence of gender dysphoria/gender incongruence and sufficient mental capacity to give informed consent to this partially irreversible treatment. Most adolescents have this capacity by age 16 years old. We recognize that there may be compelling reasons to initiate sex hormone treatment prior to age 16 years, although there is minimal published experience treating prior to 13.5 to 14 years of age. For the care of peripubertal youths and older adolescents, we recommend that an expert multidisciplinary team comprised of medical professionals and mental health professionals manage this treatment. The treating physician must confirm the criteria for treatment used by the referring mental health practitioner and collaborate with them in decisions about gender-affirming surgery in older adolescents.

The second expert alluded to, Paul McHugh at Johns Hopkins, is a crusader for outdated, biased, and cruel “medicine.” He kept Johns Hopkins on the wrong side of medical progress for decades, but he’s finally failed in that quest, being renounced by the current transgender health center there. See the following article in the Washington Post, “Long shadow cast by psychiatrist on transgender issues finally recedes at Johns Hopkins”

Here is the role he has played:

Nearly four decades after he derailed a pioneering transgender program at Johns Hopkins Hospital with his views on “guilt-ridden homosexual men,” psychiatrist Paul McHugh is seeing his institution come full circle with the resumption of gender-reassignment surgeries.

McHugh, the hospital’s chief of psychiatry from 1975 to 2001, still believes that being transgender is largely a psychological problem, not a biological phenomenon. And with the title of university distinguished service professor at Johns Hopkins Medicine, he continues to wield enormous influence in certain circles and is quoted frequently on gender issues in conservative media.

“I’m not against transgender people,” he said recently, stressing that he is “anxious they get the help they need.” But such help should be psychiatric rather than surgical, he maintains.

Hopkins, however, is moving beyond McHugh. This summer, it will formally open a transgender health service and will resume, after a 38-year hiatus, an accompanying surgical program.
Again, if a true expert in psychology (gender therapy specifically) is sought by the board, one who’s a member of WPATH and follows all current standards of care, and treats hundred of local trans children, we have plenty available locally – Ana Adelstein, for example.

2. Parents should “have their faith respected” and have their school children shielded from exposure to gay or transgender children until the parents wish to bring up those “topics” with them. No, this is not a society with a state-sanctioned religious sect. You cannot expect the public schools to cooperate in denying the existence of a vulnerable minority, and segregating your children from them because you fear and wish to ignore them. Public schools are for everyone, in all our diversity, and if you expect us to screen your child’s schoolmates and allow only those you agree with and approve of, you are living in the wrong country.

3. Bathrooms and locker rooms are special intimate spaces where schoolgirls need privacy to tend to their “bodily functions” in their state of “partial undress.” No, it wasn’t about bathrooms and water fountains in the Jim Crow era, and it isn’t now. Denying bathroom access is about denying trans people the right to exist in public spaces, because you can’t study and learn when you can’t pee all day – that leads to illness and anxiety. That is denying an unpopular minority access to a free and fair and equal education.

Furthermore, we’ve had dozens of trans students use restrooms consonant with their gender identity in CSD schools over the past six years, with no fanfare, no trans-on-cis harassment or violence, and no complaint. Girls face hazards, yes, but they don’t come from trans girls. And if you want to send trans women to men’s restrooms, where they face harassment and violence, does that mean you want my trans son Noah (pictured below) in your daughter’s restroom? You can’t have it both ways. 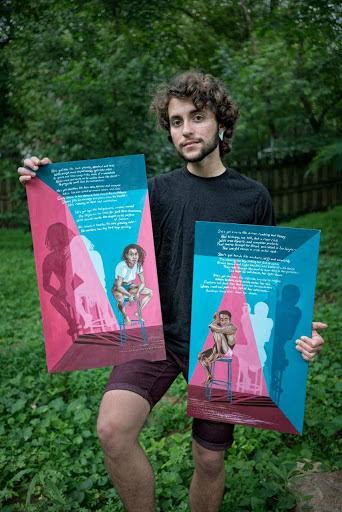 4.) Trans girls and women have an unfair advantage in sports and deprive our cis girls of their Title IX rights to make teams, earn trophies, and win athletic scholarships. Extensive medical study has achieved the consensus finding that, after one year on estrogen therapy, trans women have blood testosterone levels, and strength and speed, indistinguishable from cis girls. That is why the NCAA and professional athletic associations have the common policy that, after one year on estrogen therapy, trans women can play on women’s teams. And trans men, once they start testosterone therapy, can no longer compete on women’s teams. I know college athletes who have delayed their own hormonal transitions so they could finish out their college years on their women’s athletic teams.

And, as announced at the recent School Board meeting, we have a new ruling by the Georgia High School Association:

The Georgia High School Association (GHSA) updated its policy for 2016-17, removing the requirement that a player’s gender be determined by their birth certificate. The 2016-17 policy reads as follows:

1.47 A student’s gender is determined as follows:

(c) The GHSA will attempt to accommodate requests for private restroom or locker/dressing room facilities for students requesting the same at GHSA playoff events or contests provided notice of the request is made as soon as possible to the GHSA office. No student shall be required to utilize the private facilities.

Now, I have been active in these issues for seven years, and I have high stakes to get my facts right – because my “opinions” determined the health and welfare of my child, on a serious and complex medical journey of gender transition. However, these are tired and recurrent claims, and I was able to google authoritative and objective refutations to them in 15 minutes. Why our neighbors do not do the same, on a subject they are less familiar with, before exerting their credibility and professing these “facts” in front of the school board and 200 of their fellow citizens, I do not understand.