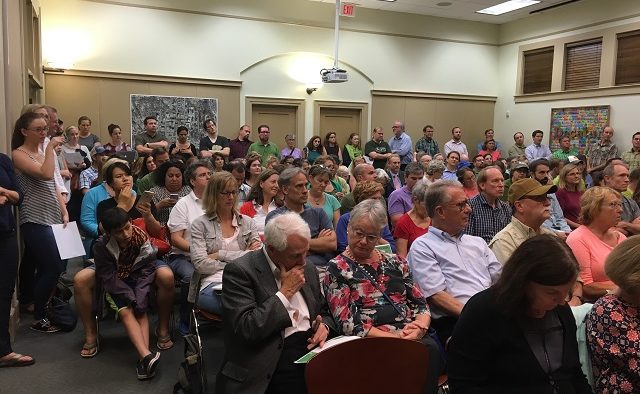 A standing-room only crowd attended Monday's Zoning Board of Appeals meeting. Photo by Mariann Martin
Share 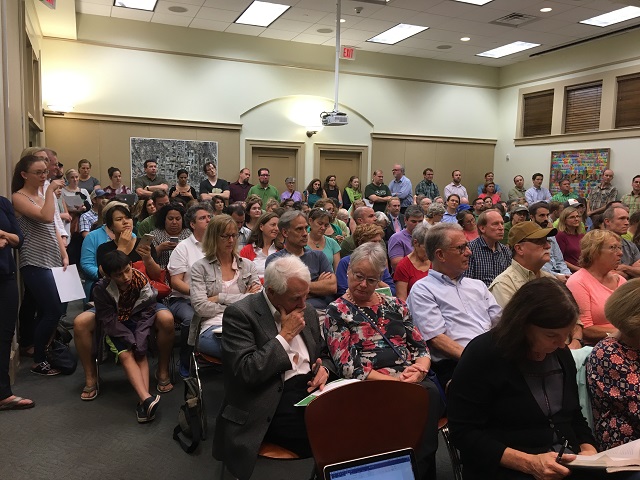 A standing-room only crowd attended Monday’s Zoning Board of Appeals meeting. Photo by Mariann Martin

After three hours of discussion and public hearings on Monday, Decatur’s Zoning Board of Appeals punted on a decision to allow development plans near Dearborn Park to move forward.

Nearly 200 people packed the room at City Hall, lining the walls and sitting on the floor during the meeting that continued until after 11 p.m. More than 20 people spoke during the public comment, voicing their opposition to the proposed development.

At issue is a nearly 4-acre proposed development site at West Dearborn Circle and Chevelle Lane. Kudzu Capital LLC purchased the land in June 2016. The property is divided into 16 lots, but does not have a road that provides easy access to the lots. Kudzu filed for a variance from the requirements of the city’s Unified Development Ordinance to allow for a private driveway onto the property.

The property has not been previously developed and has a rugged terrain. It is also adjacent to the county-owned Dearborn Park, which is a 7-acre green space with a nature trail and a creek running through it.

The development has been met with vehement disapproval from many residents. More than 50 emails protesting the proposal were sent to the city, city officials noted.

During the meeting, no one spoke in favor of the development, but resident after resident lined up to speak against it. They noted how important the greenspace is to the entire city. They talked about the old-growth forest, the creek, the owls, and a coyote found in the park. The area also has a ravine and provides needed storm water run-off, residents said.

“It would be devastating to take this away,” said Sonja Benjamin, who lives nearby. “This is not for the greater good of the people of Decatur. We don’t want you to do this.”

Residents also said Kudzu had not tried to reach out to them or consider their objections.

The property has been a point of contention for nearly two years. In December 2015, Decatur City Commissioners voted to pay $500,000 to buy the land with plans to expand the park. The city discovered later that the property was already under contract with Redwater LLC. Redwater filed a lawsuit against the previous owner to resolve the issue, and the purchase was completed in June 2016, according to documents filed with the city.

Neal Hightower, who attended the meeting Monday night, is associated with both Redwater and Kudzu.

The city has since tried to purchase the property from Kudzu, but Kudzu says the city is not willing to pay fair market value. The current city zoning map designates the area as greenspace, even though it has been privately owned.

“Its dedicated for green space. It shows it right there on the wall,” said board member Seegar Swanson, as attendees applauded and cheered.

Attorney Linda Dunlavy, representing Kudzu, presented the request to the five members of the zoning board. Dunlavy argued that the request for the 20-foot wide driveway is well within the city’s ordinances and should be approved. The site actually calls for a public road, Dunlavy pointed out, saying Kudzu has decided not to push for the road because a private driveway would have less environmental impact on the surrounding property. Dunlavy also said Kudzu had plans to develop only 11 of the 16 available lots to allow for more greenspace to remain.

“I recognize this is a very emotional issue for some people,” she said. “I do think it is important to focus on what exactly before this body tonight. This is not about whether you prefer see this property as a park or prefer to see it as something else.”

She later added, “This application tonight is a compromise position that is more environmentally friendly and would allow the path to stay.”

When board members asked why Kudzu had not tried to present their case to the city commission or to work with city officials, Dunlavy said they had only gotten pushback and resistance when they tried to approach the city.

Angela Threadgill, planning director for the city of Decatur, disputed the claim. She said Kudzu had not requested a pre-submittal meeting to work through differences or questions in the application. She said Kudzu had not discussed anything with city officials from January 2017 until September 2017, when the variance request was filed.

Threadgill said she did not think the plans for the private drive Kudzu submitted met the requirements to allow fire department equipment access to the proposed development.

Members of the zoning board expressed some confusion and frustration about the lack of clarity in the application, which referenced both the private driveway and an alternative public road.

“I’m trying to figure out if I have significant information to make a determination on your request,” said Michael Leavey, the board chairman.

Dunlavy asked if the board would consider approving the request and allowing Kudzu to file additional plans and information to address their questions.

“We don’t do that with a porch, much less a road,” said board member Seegar Swanson. “We’ve always approved plans as submitted.”

Several board members said they believed the Decatur City Commission would be a more appropriate place to address the development. The Zoning Board of Appeals is typically more of a last step rather than a beginning of the process, they said. Kudzu had not exhausted their alternatives before coming to the board, they said.

“We are trying to find a way that works for everyone,” Hightower, the developer, said when asked why he had not gone to the city commission or tried to pursue building a public road.

After three hours, the five board members agreed they did not have enough information to decide on the request. They voted unanimously to table the application.

Residents who stayed throughout the entire meeting were not happy with the decision. Undertones of dismay and disapproval swept through the room.

“They should have just voted against it,” several people said as they walked out.