Editorial: The road that leads into town

Editorial: The road that leads into town 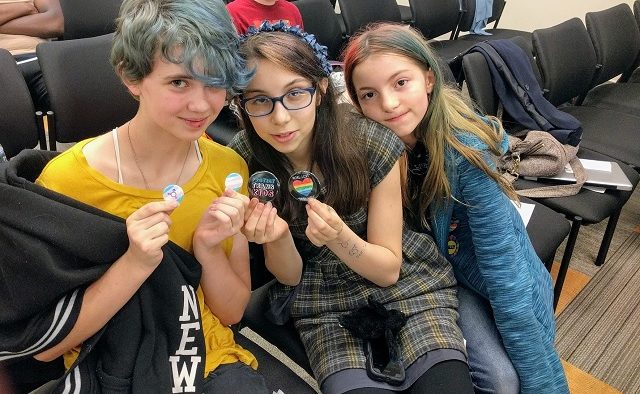 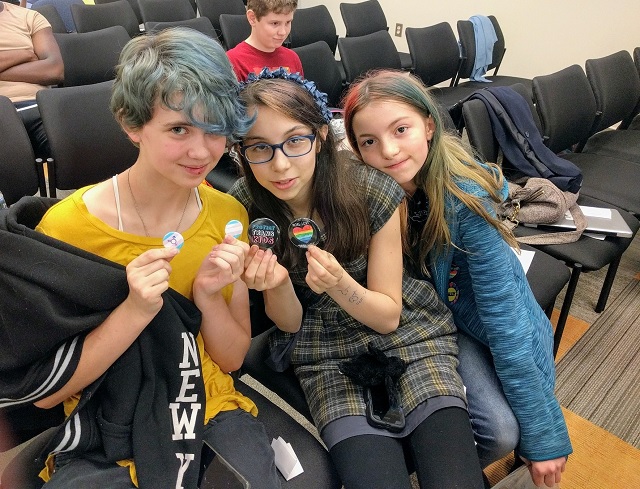 City Schools of Decatur students students passed out buttons to show support for CSD’s LGBT community before the Oct. 10 School Board meeting. Photo by Dan Whisenhunt

There’s an old saying. The road that leads into town is the same one that leads out.

Decatur didn’t just happen. It is the city it is today because it had leaders with vision. No, not everything worked out well for everyone. And, the city isn’t perfect. But its motto of inclusiveness is well intended and one that should be adopted by every community.

Recently, an unknown number of parents in our community along with some people who don’t live in the city have taken issue with City Schools of Decatur’s policy regarding transgender students. The policy, a decade old, and guidelines for implementing it, in place for more than a year, haven’t caused problems, unless you consider making sure students who are different feel welcome to be a problem.

People who have taken issue with it believe the policy puts kids at risk. Who or what are they afraid of? Every transgender student who spoke during the Oct. 10 school board meeting looked the same as any other teenager I’ve known. They were more understanding of the other side of the debate than some of the parents who spoke against the policy. They wouldn’t hurt a fly. Why, then, are some people in our community treating them like predators?

The only people who are a threat to our children are people who assume that all transgender students are potential sex offenders. Those beliefs are misguided, based on ignorance and fear.

I will admit, that I wasn’t always sure that a policy like City Schools of Decatur’s was prudent. I didn’t even know anyone who was transgender until I moved to Atlanta. But I’ve always tried to keep an open mind about things. After I got over my initial shock and got to know transgender people better, I realized that my own attitudes were based on ignorance and fear.

Public policies shouldn’t be based on ignorance and fear. As one of the students who spoke last night so aptly put it, “No matter how scared you are, how much you don’t know this uncertain territory, it’s not OK to deprive students of their rights just for that reason.”

It’s not only not OK, it’s wrong, mean-spirited and not at all what this city is about. Intolerance didn’t make the city and its school system great. Progressive thinking and caring parents did. (In fairness, being a small school system helped, too.)

The parents who spoke have some concerns about the process (or lack thereof) Superintendent David Dude followed when he issued his guidelines last year. I think those are fair points. Transparency is always the best policy. (I think it’s funny and ironic that the same parents who are demanding the school system be more transparent are refusing to be transparent about who they are and their numbers. Who is a part of this “coalition”?) But Dude’s heart was in the right place, even if the execution could’ve been better. A flawed process is not a good reason for ostracizing some of our most weak and vulnerable students. There is no good reason.

Several of the speakers who were against the policy don’t even live in Decatur. Most of the speakers in favor of it do, and that’s who the School Board serves and ultimately who they should listen to.

I write this because transparency is important to me. There should be no doubt where I stand personally on this issue. My job is to protect the powerless from the powerful. As long as I have any say in the matter, that is exactly what I will do. I’ll be fair to the parents who have a problem with the policy. I’ll listen to your views and strive to report what you say accurately. But I vehemently disagree and will always make protecting these kids my top priority.

It says a lot that some of the kids affected by this policy had the guts to defend themselves in a public meeting. They are braver than the critics cowering in the shadows. The people who are against this policy are not powerless in this process. They just don’t want to experience the social consequences for airing their views publicly in a city that overwhelmingly supports these students.

With all due respect to them, the road that leads into this town is the same one that leads out. If you aren’t happy that Decatur is a model of acceptance and inclusiveness, perhaps you would be happier elsewhere.