Lt. Governor Casey Cagle, who is running for governor, says he wants to cut off state funding to the city of Decatur for being a “sanctuary city.”

Cagle said in a Facebook post, “Liberal politicians in the City of Decatur are trying to put the interests of criminal illegal aliens ahead of our safety – and I will not allow it! I have led to outlaw and defund sanctuary cities, and we will always enforce our laws. If Decatur wants to provide sanctuary to criminal illegal aliens then they will have to operate without our funding!”

A sanctuary city is one that restricts cooperation with federal immigration agents. Decatur did recently agree to put a longstanding policy in writing regarding cooperation with Immigration and Customs Enforcement. The city said it does not detain immigrants without a valid warrant from ICE and never has. The decision to put the policy in writing is apparently what led to Cagle’s letter.

According to the Atlanta Journal Constitution, Decatur’s policy – now in written form – covers ICE detainers, requests to hold people for 48 hours so they can be picked up by federal immigration agents.

“Critics point to federal court rulings that say jailing people based on ICE detainers can violate the Fourth Amendment, which protects people from unreasonable searches and seizures,” the AJC reported.

Decatur does not have a jail, the policy notes.

“Since the Decatur Police Department does not have a facility to house an arrested person, it will be the responsibility of the DeKalb County Jail to assure that ICE notifies the person’s attorney and provides a reasonable opportunity for the person’s attorney to be present during an interview,” the policy says.

Here is a copy of the policy which the city recently put into writing:

Cagle also sent a letter to state Auditor Greg Griffin instructing him to “verify if the city of Decatur is in violation of their annual immigration compliance reporting obligation.” Here is a copy of the letter. 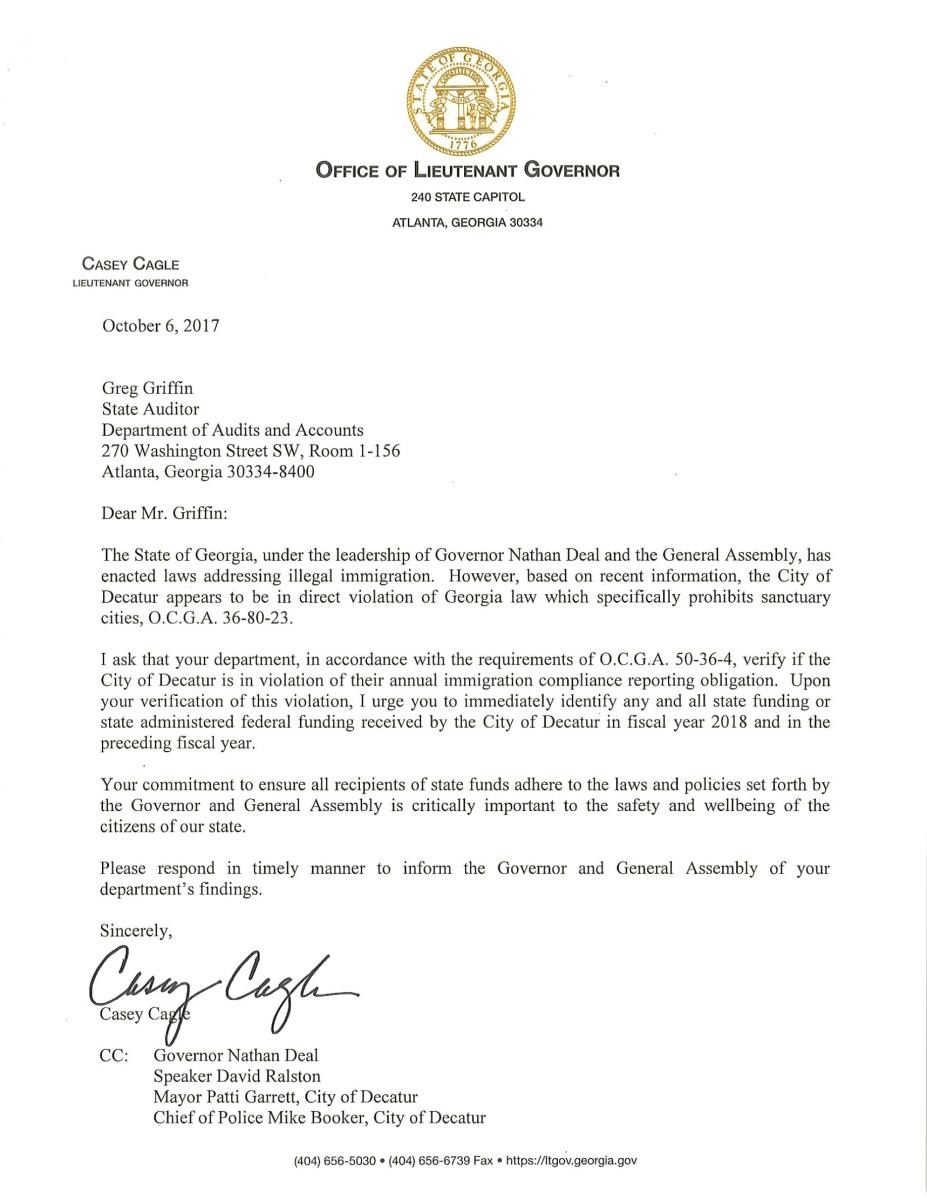 The attorney said, “The City of Decatur continues to comply fully with the State of Georgia’s local government sanctuary policies law (O.C.G.A § 36-80-23). On September 29, 2017, the Decatur Police Department amended its General Order Manual to memorialize in written form what has been the Police Department’s practice for the past decade. This policy addresses arrest, detention and custody of individuals pursuant to judicially-issued warrants, consistent with the 4th Amendment to the United States Constitution.

“The Decatur Police Department’s policy does not address, nor does it prohibit or restrict, communications or cooperation with federal officials or law enforcement officers with regard to reporting immigration status information,” the attorney continued. “The policy does not constitute a ‘sanctuary policy’ as defined by state law and there has been no violation of the state sanctuary policies law. The city of Decatur continues to meet its annual immigration compliance reporting obligation as required by state law.”

WSB-TV first reported the news, which was posted on Cagle’s Facebook page: