Sales tax will raise millions for DeKalb County projects, but some specifics are scarce

Sales tax will raise millions for DeKalb County projects, but some specifics are scarce 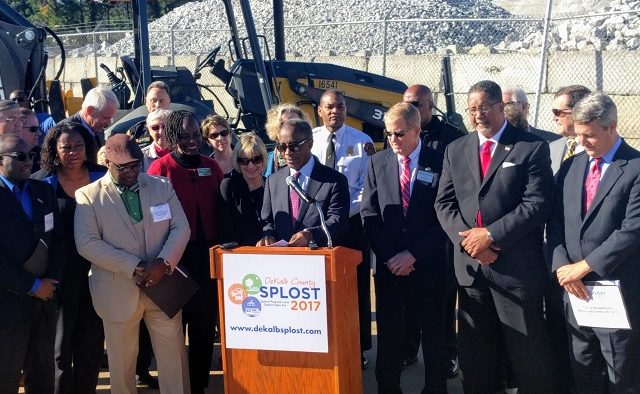 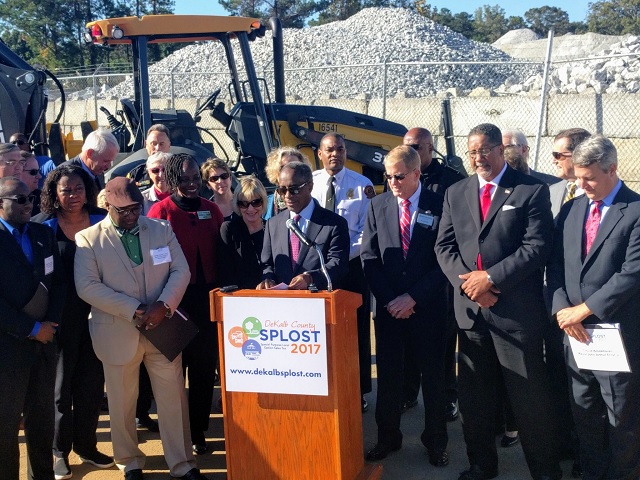 There are millions of dollars at stake on Nov. 7 as county voters decide whether to approve a sales tax for infrastructure projects.

But there aren’t a lot of details on what that money would pay for. Unlike other sales tax votes in the metro area, notably the regional Transportation Special Purpose Local Options Sales Tax that went down in flames in 2012, there isn’t a detailed project list showing how counties and cities plan to spend the money.

For comparison, click here to see the list of projects from 2012. Compare that with the county’s project list, which provides only a broad outline with categories of how money will be spent.

While there’s no official comprehensive list being distributed by the county, Mark Niesse, a reporter with the Atlanta Journal Constitution, put together the following project lists based on information he received at public meetings he’s attended.

Cities have their own project lists with varying amounts of detail. Jim Jaquish, a spokesperson with the Atlanta Regional Commission which was heavily involved in the 2012 TSPLOST effort, said the law does not require a specific project list. He said counties and cities that have done their own SPLOST votes usually have a detailed list.

“Most counties that I know of have the list out there for political reasons because the thought is people are going to vote for something if they know exactly what they’re voting for,” he said.

The lack of detail probably won’t prevent the tax from passing, however. In addition to the sales tax, there’s also a ballot measure that would give people living in cities in DeKalb County a significant tax break. As it happens, this year there are city elections, meaning more people in cities are likely to vote on Nov. 7. That’s not by design. The plan was to have the sales tax issue on the ballot last year, but an error in the wording of the bill derailed that plan.

Still, the lack of detail on how the money will be spent is not an insignificant question for a county that has struggled to overcome an image of being hopelessly dysfunctional and corrupt.

Marjorie Snook, with the advocacy group DeKalb Strong, said it would be “preferable” for the county to have a clear project list.

“Considering the history with the county, I think that it is incumbent on them to be super conscientious in their approach,” Snook said. “I want to trust them. Things seem to be going good, but we’ve got a history here, and they need to be real boy scouts about this.”

Following a press conference on Wednesday to educate voters about the SPLOST, CEO Michael Thurmond said not having a detailed list gives the county and cities more flexibility.

“We can leverage dollars with federal state and local dollars and fund projects that may not be fundable otherwise,” Thurmond said. “There’s matching money available at the federal and state level. If we leverage the matching opportunities we’ll be able to do a lot more.”

Thurmond said the county has pledged to tackle the 300 worst roads in the county identified by the Georgia Department of Transportation. When asked if the county deserved the trust of the voters to spend the money wisely, Thurmond – who was elected in 2016 and wasn’t the CEO during some of the county’s most embarrassing moments – said building trust with voters is an ongoing process.

“We are rebuilding trust across DeKalb County,” he said. “The people who elected me trusted me to come into this position, to address the issues, to provide leadership and restore trust and integrity in the government. I believe that we are doing that. It’s a journey, not an event. I recognize that. I understand and I’m intimately aware of the mistakes that have been made in the past, but we learn from our mistakes, we don’t dwell on them. As this unfolds, I’m convinced beyond any doubt that we will live up to the expectations of the voters and the taxpayers and the residents of DeKalb County.”

City voters will have a strong incentive to put their faith in the county.

In addition to the SPLOST, voters will also be simultaneously asked to approve an Equalized Homestead Option Sales tax along with the 1 cent sales tax for road projects. The idea is that money, 20 percent which is currently being used to pay for capital expenses, would be dedicated solely to property tax relief. The money that cities received from the current HOST has decreased as new cities like Tucker and Stonecrest have formed.

The additional sales tax would cover what the current HOST does, and then some, with estimates showing the tax will raise $636.8 million for infrastructure projects over six years. The county will get the bulk of that, $388 million. But the upshot is people living in cities will see a larger tax break on what they pay the county, as shown in this chart.

How much will my home’s tax bill be reduced if EHOST passes?

This amount will vary depending upon the value of your home and the jurisdiction in which you live. The chart below shows estimated savings for a $200,000 house in each jurisdiction, if EHOST had been in effect in 2017. 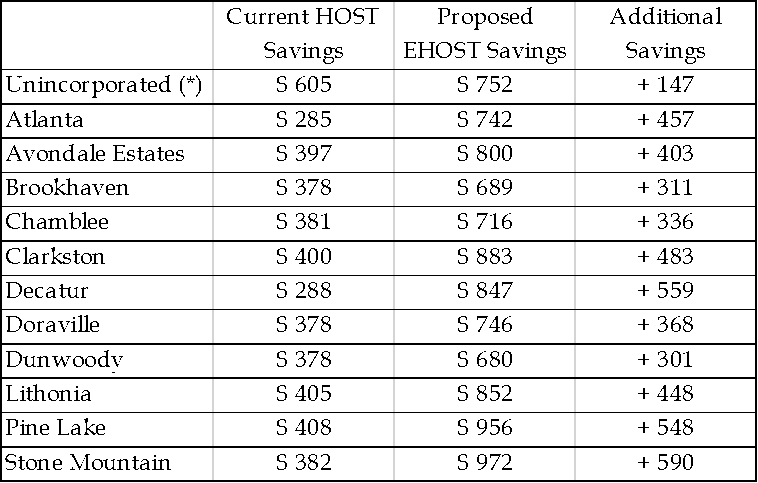 Both measures have to pass for either to take effect.

Decatur Mayor Patti Garrett said that for a $500,000 home in Decatur, taxpayers would save a $1,000 on their county tax bill. Garrett said the city will actually see what it currently receives from HOST decrease a bit, but won’t have to worry about the uncertainty of funding if new cities form.

Garrett said Decatur is the only city she knows of that will use money from the new sales tax to pay off debt incurred from previous projects.

Decaturish asked each city what they planned to spend SPLOST money on. Here are the responses we received…. 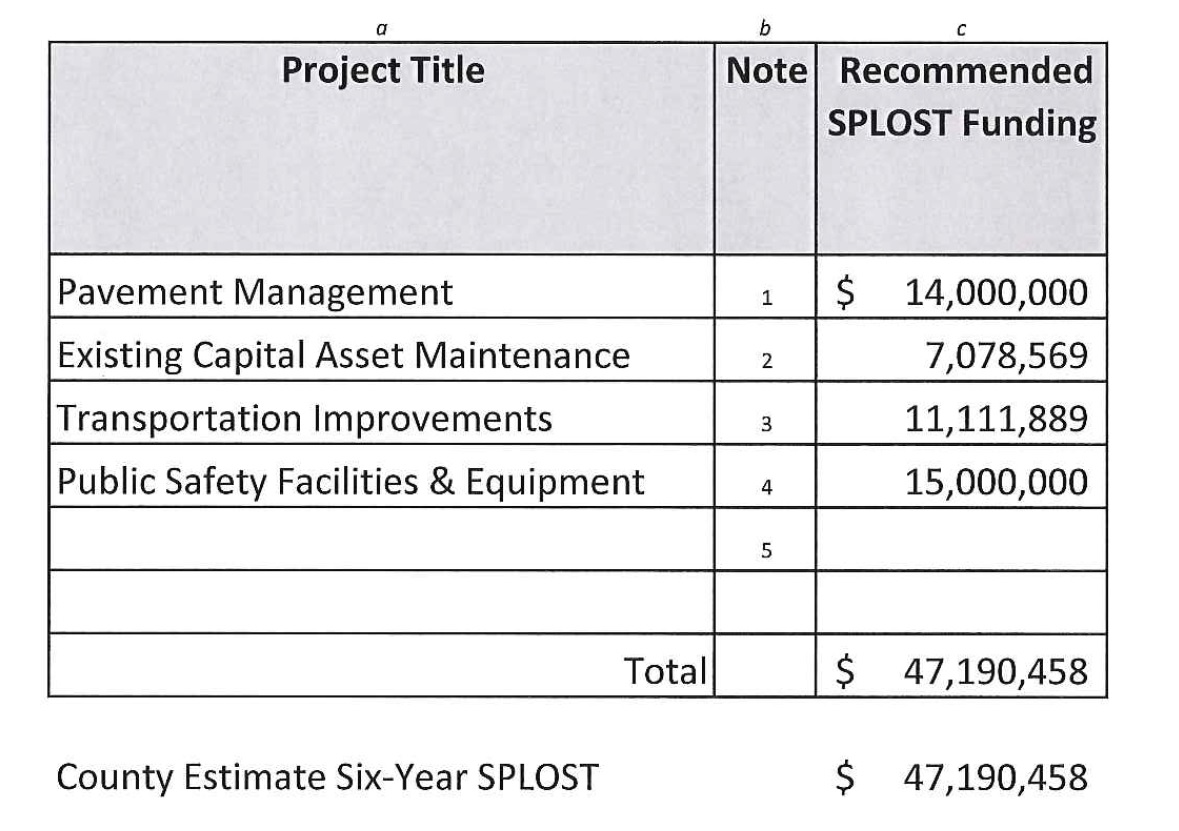 Tucker doesn’t have a project list but identified categories of spending.

According to the city, Tucker plans to spend:

Up to maximum of hundred percent (100 percent) of the proceeds for:

(a) at least sixty-five percent (65 percent) of the proceeds for roads and drainage,

(b) at least twenty percent (20 percent) multi-modal transportation consisting of,

(c) projects for fire facilities and Citywide safety equipment; and

up to a maximum 15 percent of the proceeds for capital outlay projects consisting of:

(d) the parks and recreation system and public facilities.

The city of Chamblee did not provide a list. City Manager Jon Walker said via email, “The City of Chamblee will use 100 percent of SPLOST funds for transportation projects. These will include paving and repair of existing roads, implementation of streetscape projects, and implementation of the Rail Trail. Other transportation related projects will be considered as funding permits.” When asked for more detail, he said, “We have a paving program, the rail trail, and the Peachtree Road Streetscape to start.”

The city of Dunwoody outlined how it would spend SPLOST money via email.

“While the amount of SPLOST funds Dunwoody would receive is not finalized, it is estimated to be approximately $43,987,000,” a city spokesperson said. “Dunwoody anticipates allocating approximately 84 percent towards Transportation improvement projects and plans to use the recently approved Comprehensive Transportation Plan as a guide for projects and priorities.  Transportation improvement projects may include, but would not be limited to, Infrastructure Preservation (road resurfacing, replacement and rehabilitation of bridges and drainage systems); Pedestrian and Bicycle Path Improvements (addition of sidewalks, streetscapes, bike lanes, and multi-use trails); Congestion Relief (intersection improvements, road widenings, traffic management, and signal upgrades); Safety and Operational Improvements (addition/extension of turn lanes, elimination of sight distance problems and other safety concerns, as well as widened lanes and shoulders) – overall, an estimated $36,787,000.

The city of Clarkston did not respond, but Decaturish found this project list on the city’s website.

The city of Stone Mountain did not respond, but Decaturish found the following information on the city’s website:

“Eighty-five percent of the funds in the current project list would be split between road repairs and improvements to the city’s storm water drainage system relative to roads and streets for the prevention of damage to property and roads from rain storms (77.5 percent), and public safety equipment, debt resolution for public safety vehicles and equipment, fire facilities, and related capital equipment (7.5%). Fifteen-percent of the funds in the current project list will fund repair and improvements to parks and recreation equipment and facilities, and other related capital outlay.”