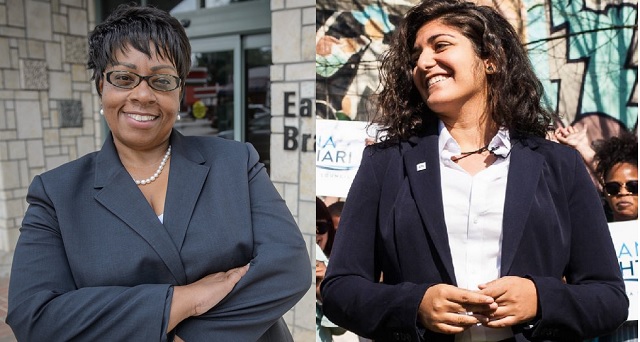 Natalyn Archibong won a fifth term on the Atlanta City Council last night, but it was not easy.

Archibong beat Liliana Bakhtiari by a mere 252 votes out of 9,754 votes cast, according to the Secretary of State’s Office. She lost Fulton County to Bakhtiari, but there were more voters in DeKalb County and that was enough to put her over the top. If a third candidate had run, it’s possible she would have ended up in a runoff next month.

When asked for comment about the results, Archibong declined. She didn’t even confirm that she had won.

“I don’t have anything to say right now,” Archibong said, before hanging up. “I will call you when I’m ready to talk about it.”

The councilmember followed up with a text to say, “I’m extremely busy right now. I will call you back later today when I have more time. Look forward to connecting soon.”

Her opponent, Bakhtiari, could not be reached for comment. Bakhtiari benefited from national media attention and was running to become Atlanta’s first “queer Muslim woman” to serve on the City Council, according to Teen Vogue.

Longtime observers in Kirkwood say that Bakhtiari fought hard and introduced herself to many voters.

Doug Wood, a supporter of Archibong who is involved in the Kirkwood Neighbors’ Organization, said the community has changed significantly since Archibong was first elected.

“The community has changed a lot in 16 years,” Wood said. “There are a lot of new constituents that have moved in and probably aren’t familiar with all the great work she’s done over the years.”

Earl Williamson, another KNO member who declined to say who he supported, said Archibong faced a number of challenges in her reelection bid.

“In general people are becoming less enchanted with long-term incumbents,” he said. “You’re seeing that in other types of political settings as well. It’s not just a city of Atlanta council race. There are spotty places in the U.S. where if you’re an incumbent, you’re at a disadvantage. It’s a slow evolution in public perspective, I think.”

Like Wood, Williamson said the change in Kirkwood’s population was a factor.

“I’m not talking racial demographic either,” he said. “The racial split in Kirkwood has changed little in the last 10 years. What’s changed is your income levels. It’s gone from a lower-middle-class to middle-class neighborhood to a quickly progressing upscale [neighborhood]. You’ve got a lot more people here now who have serious money. I don’t mean rich, but they’re definitely upper middle class. That’s a demographic that is less predictable in local council races. They don’t tend to vote for same old same old.”

Other factors hurt Archibong as well. She’s developed a reputation for not being responsive to constituents, Williamson said.

In the end, it was not enough to unseat a powerful incumbent.