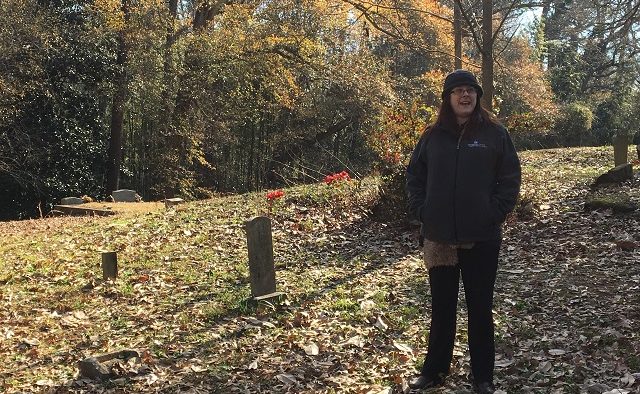 Laurel Wilson, a local Decatur historian, led a tour through the Decatur Cemetery on Dec. 28. Photo by Mariann Martin
Share 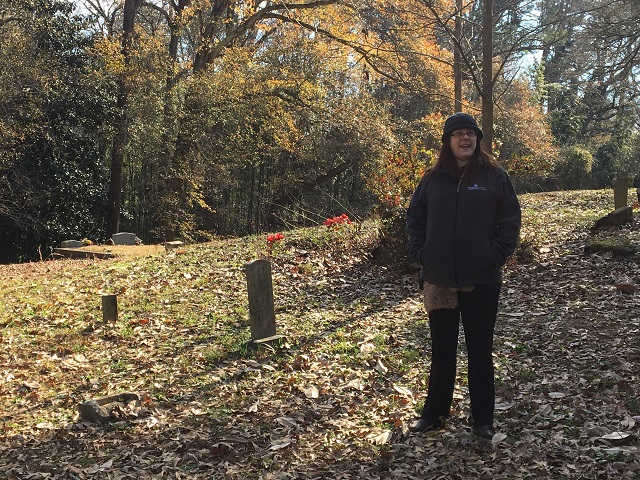 Laurel Wilson, a local Decatur historian, led a tour through the Decatur Cemetery on Dec. 28. Photo by Mariann Martin

Groups working to remove of the Confederate monument on the Decatur Square said they will need to go back to the drawing board after a tour of the Decatur Cemetery.

Members of Hate Free Decatur and the NAACP’s Beacon Hill branch had considered the cemetery as a potential future home for the monument. Since the monument has been described as “funerary object” honoring dead soldiers, some people suggested it might be best place to place it in the cemetery, along with a panel that interprets the obelisk.

But after the tour on Thursday, everyone who participated in the tour agreed the cemetery was not an appropriate place.

“We’ll go back to work figuring out where it can go, so we can chart a course,” said Mawuli Davis, with the NAACP’s Beacon Hill branch. “But this has really helped us; this doesn’t appear to be a place.”

The DeKalb County resolution included language that said the monument would need to have context around it. Ideally, that would be some panels written by a group of historians explaining the background and story, Davis said.

Activists have demanded the monument’s removal in the wake of a violent white supremacist rally in Charlottesville, Va. that resulted in the deaths of three people. These groups held a rally and a discussion in the city’s downtown to support removing it. The monument has also been defaced three times since the debate began.

Laurel Wilson, a local Decatur historian who has done extensive research at the Decatur Cemetery, led the tour on Wednesday and strongly opposes the move to the cemetery. The city of Decatur, which owns the cemetery, also does not want the monument moved there.

“This is just not the place for it,” Wilson said. “That monument is from hate. I can’t imagine that kind of negativity here in this peaceful place.”

Wilson has spent more than three years researching the history of the cemetery and the stories of the African Americans buried there. The cemetery dates back to the 1820s, with the first African Americans were known to be buried in the 1880s in what is now known as Section 6. Some of them were formerly enslaved people, and most were members of the historic Beacon Hill community.

About 1,000 African Americans are buried in the segregated area of the cemetery, many of them in unmarked graves. During the tour on Wednesday, Wilson told stories of war veterans, caterers, carpenters and other members of the community. Wilson and other volunteers have worked to restore the graves and better record the history of the people buried there.

Wilson said she opposes moving the monument to the cemetery for several reasons. One is that the old section of the cemetery is completely full. Even in spaces that appear empty, her research has uncovered hundreds of unmarked graves.

She also fears the move would attract even more vandalism than the cemetery already experiences. The 70-acre cemetery is not fenced and does not have strong security. It has a small budget that barely covers regular maintenance issues. The media attention and scrutiny that would result from having the monument located in the cemetery would likely bring vandalism and encourage damage to already fragile gravesites, Wilson said.

“If you have the monument here, it is going to be a target,” Wilson said. “There will be a target on every grave. We can’t keep it safe…Please don’t bring it here.”

Wilson suggested moving the monument to the Stone Mountain cemetery or museum.

Lyn Menne, Decatur’s Assistant City Manager, also participated in the tour. She said the city does not support moving the monument to the city-owned cemetery and does not think it is a suitable location. The city has said they do not own the monument, but that it belongs to DeKalb County, and the county most provide leadership in moving it.

After the tour, Paul McLennan, with the activist group Hate Free Decatur, expressed some frustration that they would need to spend additional time on finding a place for the monument. Their grassroots groups have shown the public supports the removal, and now it is time for public officials to take leadership and find a place for the monument, he said.

“Going to Stone Mountain is going to mean a whole new layer of bureaucracy that is going to take more time and energy,” McLennan said. “And I think the most important part of this – we always saw the monument as a symbol, something that needed to be done so we that could get to other issues that are happening today and to get hung up on this is taking away energy from school equity, affordable housing… There is so much going on in the present that we need to address.”

While the process is challenging, Davis thinks the history and information that has emerged is a good thing. So often, the history of African Americans focuses on subjugation, but the stories of successful black communities that worked together to create strong communities are overlooked.

“I think delving into history is a good thing even when that history is painful,” he said. “The history of that monument is painful for me and my ancestors. But it is a good thing because you deal with that pain and that understanding helps create greater resolve. So if the folk that are buried out here went through all of this – couldn’t vote at the DeKalb County courthouse – then this is nothing compared to what they went through. I think the historical part of this is critically important, and I’m hoping we don’t miss that. That getting into the history is what will give us the strength to persevere as we move forward.”

He added, “We’re going to ultimately get this relocated and we’re going to win and continue to learn about it all.”